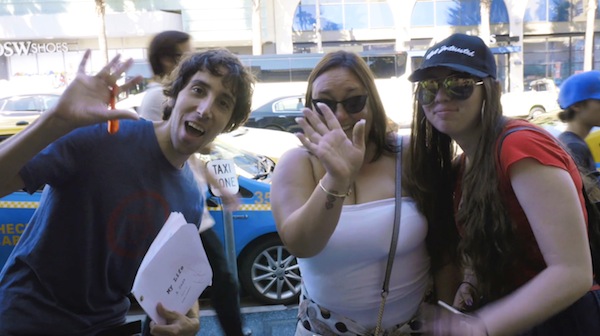 In Bloomywood, Michael Bloomstein (played and co-created by David Meyers) wanders around Tinseltown asking random people on the street to help him make a movie about his life. (photo from David Meyers)

When David Meyers moved from New Jersey to Los Angeles, one of his goals was to make it in Hollywood. Without any connections or famous friends, he set out to get a project off the ground. Finding humour in his struggle, Meyers developed a fictional comedic YouTube mini series called Bloomywood, which is loosely based on his experiences.

“It isn’t autobiographical per se, but is definitely based on my experience of trying to be an artist,” Meyers told the Independent. “Michael Bloomstein has never been to Hollywood before, but he does have an unyielding self-belief and a willingness to do anything to succeed. As he chases his goals, Michael will see the highs and lows of the industry – and question if he really has what it takes to make it.”

Meyers said there is so much rejection and “no” along the way for people trying to succeed in Hollywood that he and his co-creators want to show there can be joy and optimism in chasing your dreams.

In the series, Michael wanders around Tinseltown asking random people on the street to help him make his movie, using an unscripted mockumentary format. “In the tradition of Curb Your Enthusiasm, Ricky Gervais and Sacha Baron Cohen, Bloomywood incorporates man-on-the-street interactions, sketch comedy and improv to explore the absurd realities of Hollywood,” said Meyers.

“When we made the show, I thought no one would stop to talk to Michael when I approached them on the street – but almost everyone did. And I think it is because they were attracted to this character who was determined to be positive and happy, no matter what happened. And I think that’s a message people could really use right now, with all the negativity we are bombarded with.”

Meyers, who was raised in Fort Lee, N.J., went to Rutgers University and Columbia Law School. After graduation, he worked in the staff secretary and communications offices in the White House for three years, then did communications and speechwriting in the U.S. Senate. He worked part-time in journalism, wrote plays and pursued acting, as well. He did a national commercial with Danny DeVito, was in a feature film called Killer Caregiver for Lifetime TV, did a commercial with James Franco, and more.

He has written plays that have been produced around the United States, and has two TV shows in development. His play We Will Not Be Silent – based on the true story of a group of German college students who opposed Hitler during the Second World War – had five productions around the country. “It was supposed to come to New York, starring two-time Oscar-nominee Michael Shannon and directed by Dexter Bullard. Unfortunately, we were derailed by COVID, but I hope not permanently,” said Meyers.

Growing up, Meyers was very active in his Jewish community. His grandfather was Orthodox and his grandparents were a very big part of his childhood. Because of his strong Jewish identity, Meyers wanted to make it clear that Bloomstein was a member of the tribe.

“Viewers will definitely know Michael is Jewish,” he said. “He talks about it all the time. Since so much of the show is improvised, and since being Jewish forms so much of who I personally am, I knew Michael had to be Jewish. Once I came up with the name Michael Bloomstein, it wasn’t even a question. I didn’t try to come up with a Jewish name – it’s just so internal to me, that my first idea of a name was Michael Bloomstein.”

“Not only that,” Meyers continued, “Bloomstein brings up his Jewishness constantly – whether it’s landlords liking him because he’s Jewish and, therefore, responsible, or the fact that his Jewish mother doesn’t believe in him. It informs all of his interactions and, to be honest, he’s definitely a bit of a nebbish.”

Meyers met his co-writer for the show, Taylor Gregory, after an audition in Los Angeles. “The director left right before I was supposed to go on,” he said. “So Taylor and I talked about the way that people mistreat actors and writers (Taylor is also a writer), and how hard it can be to pursue your dreams amid all the rejection.

“Taylor had the idea to create this show – he initially called it Doormat – which would have my character constantly being rejected, but still move forward with hope and optimism. We decided to start filming and see what happened. Taylor’s friend Rory Leland is an incredible editor and he shot all of our footage. On our first day, the character of Michael Bloomstein really came to life. Rory and Taylor had so many great ideas and the three of us put together Bloomywood.”

They started filming Bloomywood last November and, after finishing seven episodes, the pandemic arrived. “COVID hit us really hard. We had to stop production on the show, abridging our season from 10 episodes to seven,” said Meyers, noting that each episode is two to three minutes long.

“We had an amazing social media person who was helping us, who had to withdraw after her mother died from COVID. We had a great press agent who agreed to take us on pro bono because she loved the show – and then she had to leave because of staff cuts at her agency and a death in her family. At times, it felt like the show was cursed,” said Meyers. “But we were inspired to move forward with hope and optimism, just like Michael Bloomstein. The show inspired me to stay positive on a daily basis.”

Meyers is financing the show himself. “I have been using my money from past acting and writing projects to try and invest in myself and get exposure. Right now,” he said, “the main goal is to get as many people to see Bloomywood as possible.”

Meyers is thrilled with feedback they have received. “It’s been amazing,” he said. “We have heard from celebrities and TV writers, including one of the writers from The Goldbergs. It has been really gratifying because we put so much time and so much love into this show.”

One of the people they heard from was Curb Your Enthusiasm actress Cheryl Hines. “We sent Cheryl a cameo request and, in return, we would donate money to charity, asking if she would watch our trailer and send Michael a message,” Meyers explained. “We assumed she wouldn’t do it, but she did! And we could tell by her response that not only had she watched the show, but she enjoyed it, so that was extremely gratifying.”

Although Meyers doesn’t have any ties to Vancouver, he said, “There is so much TV shooting in Vancouver and I’ve often said that I want to move there one day – I am just waiting for the right professional opportunity.”

Who knows, maybe Michael Bloomstein will wind up taking his quest for fame on the road to Canada!