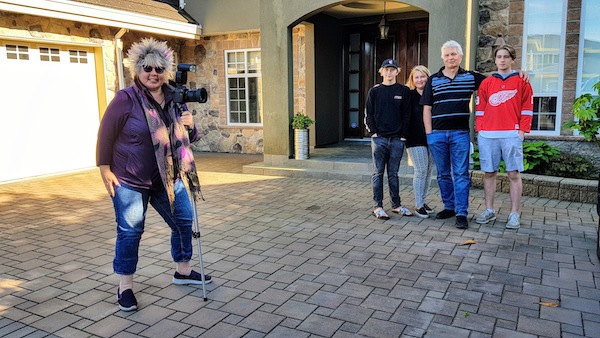 Lianne Cohen prepares to take a “PORCHtrait” of the Gorski family. (photo from Kehila Society)

As a fundraiser for Kehila Society of Richmond and/or Pathways Clubhouse, professional photographers Lianne Cohen, Jocelyne Hallé and Adele Lewin are volunteering their time (in a safe way) to photograph your family in front of your home. Dress up, stay in your PJs, hold a sign, whatever you feel like – be creative, have fun! These photos are intended to be a positive memory, to serve as a reminder of all the time you got to spend with your families in quarantine. The photographs are by a suggested minimum donation of $54 to kehilasociety.org/content/make-donation-kehila-society-richmond or pathwaysclubhouse.com/donate. A full tax receipt will be provided, along with your photographs. Bookings are available until June 7. To register, email [email protected] or call 604-241-9270.

In her retirement, Jocelyne Hallé plans to keep working as a photographer. (photo by Rachel Lando)

Members of the Vancouver Jewish community know Jocelyne Hallé. For years, she has been the official photographer of the Jewish Community Centre of Greater Vancouver, taking pictures at gala dinners and art presentations. As well, her smiling face and helpful optimism have enhanced the centre’s membership desk and greeted many members, new and old, whenever they enter the building. But, after June 25, she will no longer be there. She is retiring.

“I came to work at the JCC in 2001,” Hallé said in an interview with the Independent. “Before, I used to work for several engineering firms, as a translator or executive assistant, but, by 2001, I grew unhappy with my job. I wanted a change, so I applied to an employment agency.”

She had never thought about a job at the JCC. “My agent took me for an interview but she didn’t tell me where she was taking me,” Hallé recalled. “She just said it would be a new environment for me and that I would like it. She brought me to an interview with Gerry Zipursky [executive director of the centre at the time]. The interview lasted for two hours, the longest interview of my life, and, after that, he hired me to be his personal assistant.”

When she started her new job, Hallé didn’t know anything about the local Jewish community or Jewish culture, or even about working at a community centre in general.

“I asked him why he hired me, a non-Jew,” she said, wondering aloud. “But he said he only wanted his assistant to be competent and sensitive to the situation in the Middle East. I guess I was both, although I don’t remember talking much during the interview. He did most of the talking.”

She admitted that the adjustment period wasn’t easy. “I had to learn so much. But the more I learned about the community and the Jewish culture, the more I fell in love with it. When, in 2005, I went with the others for a working trip to Israel, I felt very comfortable, as if it was home.”

The year 2005 was a milestone for her in many respects. She took thousands of photographs in Israel, and the experience propelled her lifelong passion for photography to a new level. Her photos of Israel adorned an entire wall of the JCC atrium for three years. Her affection for the country and the people reverberated through the images she captured. “It was so gratifying to see people standing in front of that wall, looking at my pictures,” she said. (In 2009, Hallé landed a show at the JCC’s Sidney and Gertrude Zack Gallery. “My friends told me that if they didn’t know better and only judged by my photos, they would’ve thought Israel a green country,” she confided happily.)

Another, sadder event also happen in 2005 – she was diagnosed with breast cancer soon after she returned from Israel. “Cancer changed me, in a good way,” she said. “Contrary to everyone’s expectations, it was a positive experience. I realized what was important in life. I learned who was a real friend and who wasn’t. Before, I was working too much, always tired and heading for depression, but my illness gave me leave to take care of myself.”

She took time to recover and, after two years, returned to the JCC. Her former boss was no longer there, so she started working at the membership desk. “It was a different environment,” she explained. “I finally met many community members and I was away from all the politics. I loved it. Everyone was very friendly and helpful; I felt almost a part of the family.”

She continued learning about the community, immersing herself in the culture and traditions. “By now, I know so much about Jewish ways, people often ask me questions. I explain to them about Rosh Hashana and Shabbat and other celebrations. Many are surprised to learn that I’m not Jewish. To tell the truth, sometimes I feel that I’m kind of Jew-ish. We joke about it.”

In January this year, Hallé turned 60, and decided it was time to retire.

“In the last couple of years, a few of my friends died,” she shared. “It was very upsetting, but I’m alive. I’m ecstatic to be 60. I want to travel, to take some class, to work more on my photography. Recently, I went to Nicaragua for a month; I worked there as a volunteer and I want to do it again. I want to visit Galapagos and Kenya. I might volunteer with the JCC Seniors.”

Hallé is sure that her work for the JCC created an opportunity for her to develop as an artist photographer. With the support and encouragement of her colleagues and friends, she continues to explore her chosen art form. “I have nine photographic events booked this summer, right after I retire,” she said. “I’ll do a bar mitzvah, a wedding, a fundraiser, even a dance festival.”

Hallé’s plans are still in flux, but they expand every day, perhaps enough to fill the next 60 years.

To learn more about Hallé, the photographer, visit her website, jocelynehalle.com.