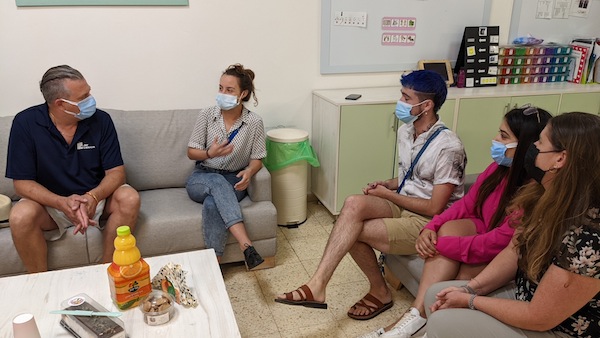 Three Israeli projects supported by the Pacific region of the Jewish National Fund of Canada are advancing well, according to Michael Sachs.

Sachs, executive director of JNF Pacific region, visited the initiatives July 7-18. He was joined on the Israel trip by local JNF supporters Lisa and Mike Averbach. The trio surveyed projects in Rishon LeZion, in Jerusalem and at Nir Galim, a moshav near Ashdod.

The project in Rishon LeZion, south of Tel Aviv, is a women’s shelter that has faced challenges in reaching completion. In collaboration with the Israeli group No2Violence, the facility was supported by two Negev dinners in 2016 – one in Vancouver, honouring Shirley Barnett, and one in Winnipeg, honouring Peter Leipsic.

The shelter is envisioned to welcome 10 to 12 families and provide victims of domestic violence with a safe environment where they can access therapy, secure income and new housing.

Emergency shelter for victims of domestic violence is gravely lacking in Israel, where it is estimated that 65% to 70% of women and children escaping domestic abuse cannot access alternative housing due to lack of availability.

“I wanted to go and see with my eyes, with my feet on the ground, how it’s progressing,” said Sachs of the project. “Finally, shovels have started going into the ground and the foundation has been laid. This project, it had been stalled for multiple reasons, COVID included, but I wanted to go and see the progress because we have a commitment that we make to our donors in our community to fulfil the project no matter what.”

One of the things that impressed Sachs most about the shelter is that it is adjacent to a community centre.

“For women and children who are in crisis, the ability to have a community centre, a place to go, a place for their kids to go, is extremely important, on top of just the safe haven,” he said.

Last year’s Negev campaign in the Pacific region raised funds for ALUT, the Israeli Society for Autistic Children, to renovate Aviv House, or Beit Aviv, in Jerusalem. This “home for life” for autistic adults was established in 1992 and is home to about 14 residents who require assistance in aspects of everyday life.

The building, more than 50 years old, was not wheelchair accessible and had infrastructural challenges. “It needed a lot of work,” said Sachs. The project, championed by honorary project co-chairs Penny Sprackman and David Goldman, saw a new roof put on the building, new bathrooms and doorways, among other upgrades.

Autism has co-morbidities and one of the residents at Aviv House has what is described as the most complex case of epilepsy in the state of Israel.

“This individual had not been able to have a real, proper shower until the renovation,” said Sachs. The renovated facility allows an assistant to accompany the resident in the new shower. “That’s just one example of how it made a difference,” he said. “The effect that we are having on the life of these individuals is immense.”

The ALUT project was especially meaningful for Sachs, he said, because it was the first initiative that took place after he became regional executive director, in April 2021. The fact that it also raised autism awareness in Canada was a bonus, he added.

A third project that Sachs and the Averbachs visited was Beit Haedut, the Testimony House Museum, on Moshav Nir Galim. The museum, located in a community founded by survivors of the Holocaust, focuses on the lives survivors made in the state of Israel.

This project is the focus of the current Pacific region Negev campaign and will involve an especially meaningful Vancouver component. In an interactive space, Vancouverite Marie Doduck, a child survivor of the Holocaust, will present virtually to visitors about her life. She will be the only English-language presenter in the virtual space, meaning that every Anglo visitor to the museum will “meet” her and hear her testimony.

Sachs has heard the question before: Why a Holocaust education centre so close to Yad Vashem, the world’s foremost education, commemoration and research centre on the topic?

“My answer is, why not?” he replied. “Why not have more places teaching people about the Holocaust, the tragedy that happened? It’s our responsibility to make sure that more and more of these centres are supported and able to function and teach a population that is starting to forget. It’s not that because you have one, you can’t have the other.”

The quality of the museum is also significant, he said: “It is a Holocaust centre that, in my eyes, punches above its weight class.”

Being close to Ashdod, where many cruise ships arrive, and near the Negev Desert, the location is also easily accessible for visitors.

Sachs hand-delivered Doduck’s recorded testimony to the museum. He credited the Vancouver Holocaust Education Centre for its assistance in making the technically complex project possible.

Returning from his first trip to Israel as JNF Pacific region executive director, Sachs was rejuvenated.

“Most people come back from Israel and they’re drained,” he said. “I came back with a newfound energy because, when you see the fingerprint JNF Canada has on the state of Israel and you see the efforts, the progress, the impact that our local community – our tiny little local community – is having on the ground there and for the people in Israel, it’s awe-inspiring. It really is. You come out of it and you are more energized than ever to continue to make a difference.”

Lance Davis, chief executive officer of JNF Canada, commended the Pacific region in a statement to the Independent.

“On behalf of JNF Canada, I am so proud that we have advanced two key projects for our organization, the Vancouver/Winnipeg women’s shelter and the renovation of the Aviv House supporting autistic individuals,” said Davis. “Thanks to the generosity of donors from the Pacific region, we are able to help build the facilities that will transform the lives of vulnerable Israelis in a profound manner. Our JNF supporters can take great pride in the fact that together we are building the foundation for Israel’s future.”

Due to COVID, JNF has not held a Negev Dinner in Vancouver since 2019, opting instead to run campaigns without the traditional gala event. Sachs hopes 2023 will see a return to normalcy.

“God willing, we’ll all be able to be back together next year for a wonderful and beautiful Negev Dinner with a wonderful honouree,” he said.