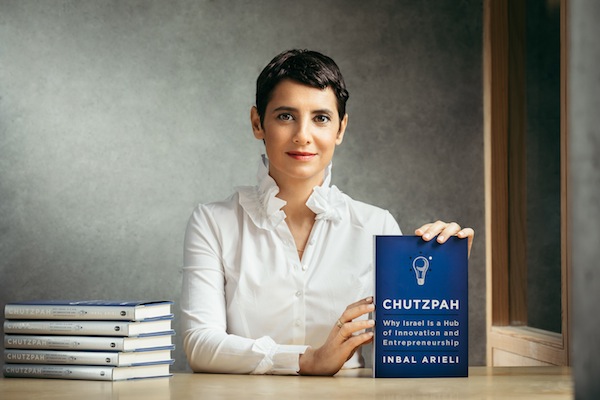 Inbal Arieli recently published the book Chutzpah: Why Israel is a Hub of Innovation and Entrepreneurship. (photo by Micha Loubaton)

Inbal Arieli has always been fascinated by what motivates and drives people, as well as what blocks their paths. “Throughout my career, which was mainly as a business executive, I always kept an eye on the human factor,” Arieli told the Independent. “And so, the businesses I started were somehow all related to that.”

Arieli, who is also a lawyer, is the owner and co-chief executive officer of Israeli start-up accelerator Synthesis. The company provides leadership assessment, as well as business training and development, in Israel, Canada and the United States.

“It is about the effect of the most critical skills that I think anyone should have today,” said Arieli about her recently published book Chutzpah: Why Israel is a Hub of Innovation and Entrepreneurship. “These are, according to the World Economic Forum, the skills which are required in the future, for anyone, regardless of your profession or future position. These are basic life skills – of critical thinking, decision-making, taking on initiative, etc., etc. There’s a long list of soft skills. The book is about these skills.

“The book shows the journey of a typical Israeli child from a very young age, as young as 3 or 4, until after military [age], young adult.”

In Chutzpah, Arieli shows how, in the five stages of childhood – infancy, childhood, adolescence, military service and then the big trip after the military – Israeli culture and society have produced principles, a framework and settings to foster these skills.

The book is not about Israel in and of itself. It is designed to help readers develop their own set of skills using the Israeli experience as an analogy.

Chutzpah (audacity), an ingrained trait, is very much nurtured in Israeli kids from a young age, said Arieli.

“From a very young age, chutzpah comes into play everywhere and anywhere,” she said. “Most of those skills, Israeli education and mindset … I think of them like muscles we all possess … only here, in Israel, we have access to the best gyms to practise these muscles.

“When you play at the playground, at age 3 or 4, the fact that you stand for your own opinion and find your own way of using the slide – an example I give in the book – that, in a sense, is a little bit of chutzpah. You don’t necessarily follow guidelines or practices. You bring your own personality [into your decisions and actions] at a very, very young age. So, it starts then, and then it fills up as we grow up here.”

Arieli sees Israeli society as being very open to giving freedom to everyone’s chutzpah – encouraging kids to exercise their chutzpah muscle, to be risk-takers, to stand out from the crowd, encouraging individualism along with a strong sense of collectivism. “Definitely, the framework that exists here, the environment, so many social structures are helping the muscles to remain developed and strong,” she said.

Chutzpah can be viewed as either negative or positive, and can be used in a positive or negative way. In Hebrew, one can differentiate between the two, depending on where the accent is placed. Arieli does not think it is important to differentiate between the two concepts of chutzpah. Rather, she contends that, just like any other muscle, the use of it needs to be calculated.

“Chutzpah is not a button you can press on or off,” she said. “It’s a mindset. In the context of innovation or entrepreneurship, I think it’s a very positive thing. And so are the other skills, ideas or principles spoken about in the book. I think it’s all a matter of finding the right balance between using them or not using them, and when to use them. What’s right for certain stages is less relevant for other stages.

“More than anything, I think it’s the combination of having these skills along with other skills is what’s optimal. But, I also think it’s very challenging to create an innovative society or an innovative team or group of people without allowing them to have a little bit of chutzpah.”

According to Arieli, just teaching kids how to work in today’s job market is a recipe for failure, as we have little knowledge of what work will even look like in their generation. The one and only thing we know for sure is that the future job market is uncertain. As such, the only way to prepare children is to equip them with the ability to be highly innovative and creative thinkers, capable of taking on initiatives by shaking things up and changing things.

“I wish for my kids that they will have as much chutzpah as possible when thinking about their future,” said Arieli. “They’ll have to reinvent themselves during their career several times and I want them to be proactive in that.”

Another trait Arieli talks about in Chutzpah is balagan (mess or chaos).

“Anyone who has visited Israel knows what I’m talking about – be it traffic, on the playground, in restaurants – everything is really chaotic here,” said Arieli. “But, that chaos, balagan, propels us toward new order, allowing us to rise every time from that balagan.”

Another factor Arieli discusses in her book is teamwork and “how Israeli society, while sometimes divided, at its core, has a galvanizing mechanism rooted in survival, through our culture … what we endured as a people and our mandatory army service … all of which unite us like no other nation on earth.”

For more information about Arieli or her book, visit inbalarieli.com.