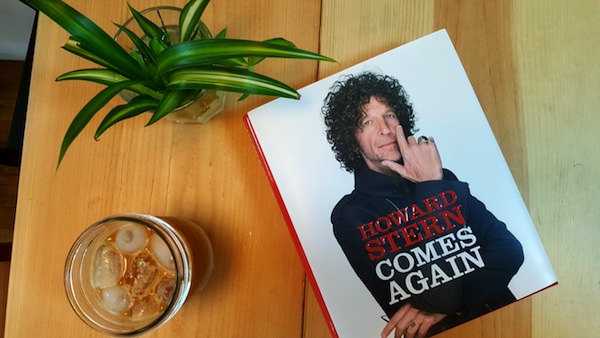 Conversation is almost a dead art. Technology, ludicrously divisive politics and sheer laziness have almost entirely killed it. How often do you see true connection happen through dialogue anymore? Most people talk at each other, not to each other. Heck, most of the time they’re more interested in their phone. And I can’t say I’m guiltless in this department. Nor would radio talk-show legend Howard Stern, at least for the first 30 years of his epic career. This is a theme that’s intentionally threaded throughout his masterful new book, Howard Stern Comes Again (Simon & Schuster, 2019).

Not a fan of Howard Stern? Many people see him as a crude entertainer willing to insult and demean others in order to win a laugh. Well, as a die-hard fan of his, I can say that’s an accurate observation – at least partially. Ever since he moved his extraordinarily successful radio show to satellite in 2006, he’s become so much more than that. His level of insight and tolerance has grown exponentially. He’s learned to see beyond himself. And he attributes this shift to his new platform, meditation and, most importantly, extensive psychotherapy. Because of these changes, he’s regarded as “the greatest celebrity interviewer of all time.”

Don’t believe it? If you’re not willing to purchase a full SiriusXM subscription, a copy of Howard Stern Comes Again will suffice as proof. Don’t worry, this book isn’t meant for those who know what “Baba-Booey” means. It’s for anyone and everyone who loves actual communication.

The New York Times bestseller highlights 37 edited transcripts of interviews from Stern’s show. Each features a guest, such as Sir Paul McCartney, Chris Rock, Joan Rivers, Bill Murray, Jerry Seinfeld, Steve Martin, Lady Gaga, Larry David – and Stern’s mom. They contain fascinating revelations from these individuals, as well as from Stern, who has written an eloquent foreword to each chapter.

Every topic under the sun is covered. Nothing stays in a “safe space,” unless it’s honest to the individual he’s interviewing. The conversations are revealing, genuine, hilarious, and even pretty upsetting at times. It’s astounding how Stern is able to extract such information from celebrities who often try to maintain a level of secrecy to protect themselves, their families, and sometimes their art. They clearly feel comfortable with him. Maybe because there’s no question he asks that he’s unwilling to answer himself. He injects his own personal experiences, opinions and shtick into his interviews, making them real dialogues. The conversations are intimate and almost seem to be taking place privately – the opposite of interviews on shows like Late Night, 60 Minutes or Oprah.

Stern’s approach has influenced countless podcasters and radio hosts. In a May 8 interview with the Hollywood Reporter this year, Stern described his style as “the dinner party approach.” This is an apt description. And, thanks to his new book, it is not only his listeners who get to be flies on the wall.

Howard Stern Comes Again is 130 mini-biographies in less than 600 pages. It’s not just the 37 that are included. The beautifully bound and well-formatted book also features short exchanges between Stern and a variety of other comedians, actors, news anchors, mobsters, filmmakers and musicians. These snippets are compiled in special chapters where the likes of Dave Chappelle, James Taylor, Tina Fey and Vancouver’s own Seth Rogen speak on topics like sex, religion and death.

Which brings me to Trump.

Unfortunately, I can’t get away without mentioning the current president of the United States. He features heavily in the book thanks to several chapter breaks entitled, “And Now a Word from Our President.” They present fragments of Stern’s now-famous interviews with “the Donald” before he became leader of the Free World. Although Stern has revealed he isn’t a supporter of Trump – a fact that put Stern in Trump’s bad graces – not every interaction with him is negative. Stern shows that he’s capable of doing something Trump clearly is not able to do – having a conversation, even a light-hearted one, with someone of a different opinion. Having said that, there are certainly some cringe-worthy moments here that maybe even Stern regrets. But, honestly, it wouldn’t be a Howard Stern book without them.

Because of Stern’s approach to conversation, as well as his outrageous comedy, he’s been described as “divisive.” I actually thought he was a monster before I was turned onto him by another member of the Jewish community who encouraged me to listen. And, guess what? I laughed. I learned to take things less seriously – especially the darkest aspects of society. Confronting them the way he does makes them more manageable.

I also became aware of Stern’s enlightened stance on equal rights, the environment, freedom of speech, Israel, and animal rights. Even when I disagree with him, I love him. Because he comes from an authentic place. A place of experience. Of flaws. A place with passion and desire. And never has this been more obvious than in a book focusing on – gasp – actual human interaction.

It’s apparent that Howard Stern Comes Again is meant to be considered as Stern’s legacy. Whether you’re an active listener or completely unfamiliar with him, it is something to appreciate and, maybe, just maybe, from which to learn.

Adam Bogoch is a Vancouver-based screenwriter and content writer.