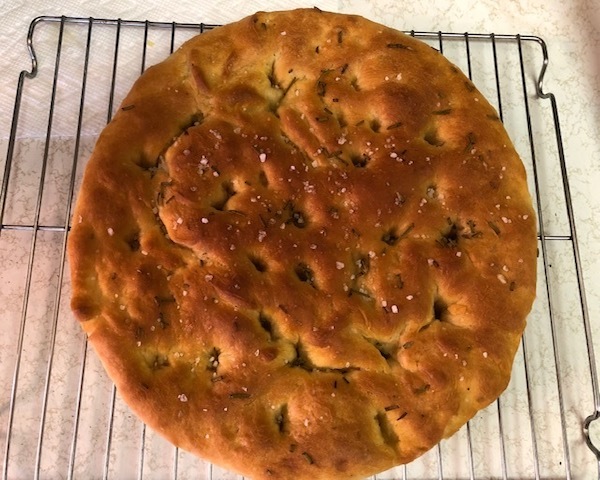 Focaccia straight from the oven. (photo by Shelley Civkin)

Ladies and gentlemen, start your engines, please. Or, in this case, your yeast. From zero to focaccia in one hour.

My unpremeditated transformation from water-burner to bread-baker is shocking even to me. Or especially to me. When hubby Harvey came home one day with a cast-iron pan, I got über excited, thinking I could now fry like my father used to. Though, when frying became a dirty word in the 1990s, he called it sautéeing. But, somehow, sautéeing seemed too prosaic for the mighty cast iron, so I started investigating what else I could do with the skillet.

Thanks to Google and Pinterest’s cookies, they now know that I like baking bread. I automatically get links to recipes for cast-iron bread-baking. Every. Five. Minutes. Enter focaccia, stage right. Or, if you’re Italian … entra nella scena della focaccia a destra.

I perused the myriad recipes and took a few of them on a test drive. Or test bake, as it were. The following recipe overtook the others by a mile, and won in the finest focaccia category. Here’s a link to the winning One-hour Rosemary Focaccia Bread I’ve come to love: flavorthemoments.com/one-hour-rosemary-focaccia-bread. (It actually takes an hour-and-a-half, if you include the time it takes to preheat your oven.)

It’s my go-to quick bread recipe. It’s truly no-fail. Feel free to ditch the garlic and Parmesan, or add more rosemary. You can’t screw up this bread. After my first try, I was hooked. I let the gorgeously golden focaccia cool, sliced it into small rectangles, like they do in Italian restaurants, and dipped it in EVOO (shorthand for extra virgin olive oil). Which made me wonder what an “extra virgin” is? Something to ponder another time. Never mind. Not relevant. Anyway, I’ve made this focaccia several times. Needless to say, I am not getting thinner. But my Italian is improving.

Now that I’ve pretty much nailed down challah and focaccia, I decided to branch out and try making a no-knead round crusty bread. You know, like sourdough. Minus the sour. The kind that requires you to have a Dutch oven. Google and Pinterest are way ahead of me, so they’ve been sending me nonstop recipes and pix of Dutch oven bread. All I had to do was think about crusty bread and they were on it.

I recently learned that not all Dutch ovens are created equal. They’re mostly made from cast iron covered in enamel, but not all of them can withstand the high heat you need to use. Thing is, for crusty bread, you have to heat the Dutch oven to about 450 degrees – empty. Then you put the dough in it. You don’t want to ruin a fancy shmancy Dutch oven over a loaf of bread. Even though my Dutch oven isn’t one of those $400 Le Creuset ones – it’s a $65 one from Costco, which works perfectly for pot roast, chicken and everything in between – I’m loathe to risk ruining it over bread. Sure, I could go buy one of the fancy Dutch ovens but, seriously, $400 for a crusty loaf? Not in this lifetime. I worked too hard to fritter my money away like that. And, like I always say, just because you can afford to buy something, doesn’t mean you should.

So, I improvised and used an ancient Magnalite aluminum-magnesium alloy Dutch oven that belonged to my friend’s late mother. I’m hoping I don’t get Alzheimer’s, what with the aluminum connection, but it’s not like I’m going to be making every single meal in it. Anyway, the bread was a marginal success. The outside looked gorgeously crusty but, once I cut into it, parts were doughy and uncooked. Bake and learn. I’ll try it a few more times, tweaking the temperature, increasing the rising time, etc., and hope for the best. If at first you don’t succeed, well, suck it up and try again.

I can hear some readers wondering why I would want to waste half a day baking bread from scratch, when I could just go out and buy a loaf. Well, there’s something indescribable about the smell of fresh baked bread wafting through my home. It’s a little like a comestible aphrodisiac. It makes me weak at the knees, thinking about the butter melting slowly over the hot bread, as I sniff it lovingly with anticipation. Wait, this is becoming a little X-rated. I need to get a grip. Sorry. Suffice to say that my husband and I adore fresh bread and appreciate the effort it takes to make it. And, since I’m a notorious multi-tasker, I busy myself with other things while the dough is rising, so there’s no wasted time. Like now, for instance. I’m writing this article while waiting for my rosemary and Kalamata olive bread dough to double in size.

Never having been one to let grass grow under my feet, my next culinary foray will be gravlax. Ever since tasting my friend Roxanne’s heavenly gravlax last Pesach, I’ve been itching to give it a go. Since salmon season is upon us, there’s no time like the present. Harvey’s on board too, but not as a cook as much as a taste-tester. From what I can tell, it’s a ridiculously easy thing to make, as long as you have truckloads of salt, sugar, dill and time. No, not thyme. Once I perfect the recipe, I’ll share it with you. But not until then.

You can try till you’re blue in the face to convince me that store-bought food is just as good as homemade, but I’m not buying it. Literally or figuratively. There’s just something about the laying on of hands, the investment of love and effort, and the satisfaction at the end of it all, that makes homemade food so very worth it.

I suspect I might have made a very dedicated homesteader. As long as I had an electric stove and oven, and a good refrigerator. Oh, and maybe somewhere close by where I could get a good decaf, low-foam, lactose-free latte while I was growing my own food, baking bread and churning butter. Am I country girl at heart? Hell, no! I am about as cityfied as they come. To wit, my idea of camping is a Motel 8. And outhouses? They should be outlawed.