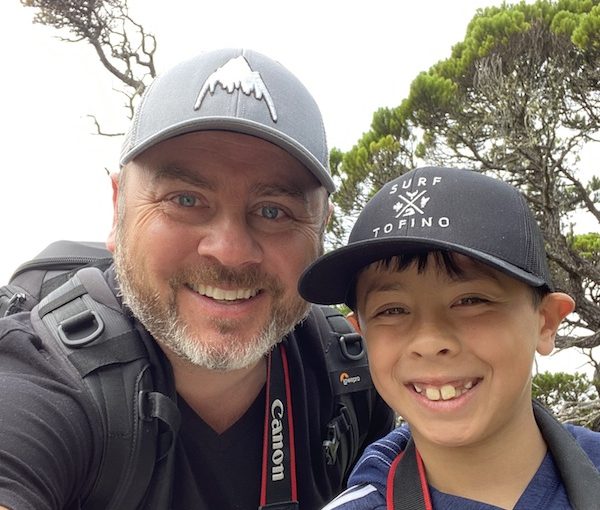 The current photography exhibit at the Zack Gallery, Discoveries: A New Way Forward, allows visitors a peek into the wilderness of British Columbia. A bird serenades the sunset. A bear crosses a road. A coyote glares into the camera. Even a Whistler bridge seems to lead to an adventure in the forests and mountains of our province. The photographer, Micah Groberman, talked to the Independent about his art and how the pandemic set him on his new creative course.

“Before the pandemic, I had a business with a partner, Ivan Solomon. We did many different things, but mostly we designed wall murals for children’s stores, hospitals and private clinics,” said Groberman. “After the pandemic hit, we couldn’t do it anymore, couldn’t stay inside the enclosed spaces for the long time it takes to create a large mural. Many places closed. School was canceled. I had to stay at home and take care of my sons.”

For Groberman, instructing his elementary school sons from a set curriculum was frustrating. “I’m not good at math,” he joked. So he found something else to do with his boys. He shared his passion for nature with them. They went for walks in local parks. And they took photographs.

“I started taking photos when I was about 9,” Groberman recalled. “It was with a simple camera, the point-and-shoot kind. I enjoyed it and did it for a long time, simply for myself and my family. During COVID, my photography took a more serious turn. I wanted to do it well. I wanted to learn. I watched videos on YouTube. You can find all sorts of useful tips online. I got myself some professional gear, a large camera. And I took photos. Many, many photos. I learned by doing.”

Groberman classifies his images into three categories: landscape, wildlife (which includes all his animal and bird shots) and fine art. The last category is the most inclusive. It overlaps with landscape and boasts some unusual shots, like a PNE ride from a rare angle or an old pickup surrounded by flowers that displays an uplifting message in its cargo bed.

“I took it last year at the Richmond Sunflower Festival,” Groberman explained. “The organizers put the old truck among the flowers, and I thought it looked interesting.”

Many of his images, especially of wildlife, are fascinating because he has sought them out. In addition to artistic skill and adequate hardware, nature photography requires a great deal of perseverance and patience. Groberman has both.

“The bear that crosses the road – I took this picture from my car,” he said. “We were in Whistler, driving around, looking for bears. It took us three hours, until one walked out of the woods.”

Another of his amazing wildlife shots is a coyote on a piece of driftwood. “I noticed him hiding in the bushes on the other side of a stream in Richmond. I followed him for about five minutes, with only glimpses, until he came out and stared at me. I took the shot, but I was glad there was water between us.”

While taking his own photos, Groberman tried to share his knowledge with his sons. “My younger son wasn’t that interested,” he said, “but my older son, Evan, took to photography. I taught him, and he inspired me. Many of my photos in this show I took when I was with him. I think teaching him made me a better photographer.”

Groberman hadn’t ever exhibited his photos prior to the pandemic. He had never even thought about doing so. “It was just a hobby,” he said. “But, in 2020, I participated in a group show at the Zack. A couple of my son Evan’s photos were also on display. That’s how I first met Hope [Forstenzer], the gallery director.”

According to Groberman, the current show was supposed to be a double feature, including a sculptor as well. “But the sculptor didn’t happen,” he said, “so it became my solo photography show. There are 37 images in the show: 30 are mine, seven are Evan’s. We have a show together.”

Groberman hopes that his wall mural business will recover once the pandemic ends, but he also sees several new avenues for his creativity.

“I want to do more with my photography,” he said. “I’m exploring different options, trying to establish myself locally. I went to stores to offer them prints of my photos and postcards. I rented a bunch of my prints to a movie set. I entered local contests. One of my photos – a mama hummingbird feeding her babies – was featured on CBC. Another – a photo of a heron – won the Richmond banner contest last year in the nature category. You will see my heron on the streetlights in Richmond. I have an Instagram account. I’m just starting with photography, but I want to see where I can end up.”

Discover opened on Oct 4 and runs until Nov. 7. Learn more about Groberman’s work at micahgphotography.com.