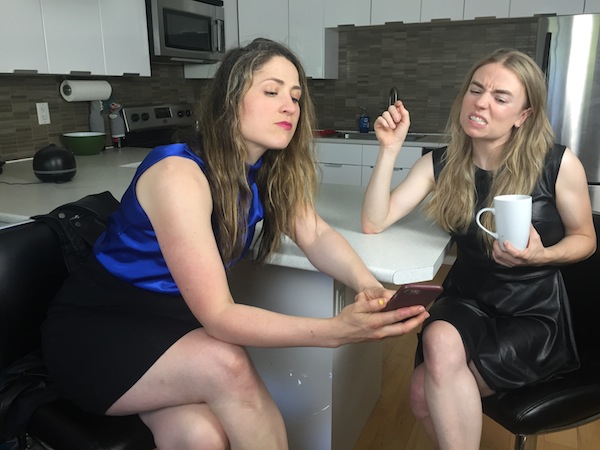 Megan Phillips, left, and Hayley Sullivan in A Coveted Wife of East Van, part of the Vancouver Fringe Festival, which runs Sept. 9-19. (photo by Marn Norwich)

An all-star Jewish team consisting of poet Marn Norwich, director Ariel Martz-Oberlander, jazz musician Itamar Erez and actress Hayley Sullivan join forces to produce A Coveted Wife of East Van, the post-pandemic dating musical that you didn’t know you needed at this year’s Vancouver Fringe Festival. Light and fun, this show is the cathartic release we’ve all been jonesing for after months of pandemic isolation and, if you’re single, forced celibacy.

A Coveted Wife of East Van tells the story of Samantha Cohen as she navigates friendship, men and dating apps while making some very bad decisions along the way. Featuring both original music by Erez and familiar melodies from shows like Fiddler on the Roof, the story is set in Commercial Drive’s Café Deux Soleils. Samatha goes on a date with an East Van hippie, don’t forget the crystals; a mansplainer, need we say more; a pimp; and a murderer, who brings her ex’s head as an offering on their date. Just before things go horribly wrong, Samantha is saved by her best friend in this story about friendship, online dating and the search to find “the one.”

Norwich, an independent journalist for the CBC and Georgia Straight, and Erez, nominee for 2020 Instrumental Artist of the Year award, are joined by award-winning director Martz-Oberlander and Sullivan, as well as producer of the Or Festival Olivia Etey; Best of Fringe Award-winning actor Megan Phillips; winner of best comedy at the 2020 Florence Film Awards actor Mostafa Shaker; and set designer Michael Duggan, who has 30-plus years in the industry and has worked on more than 25 film productions.