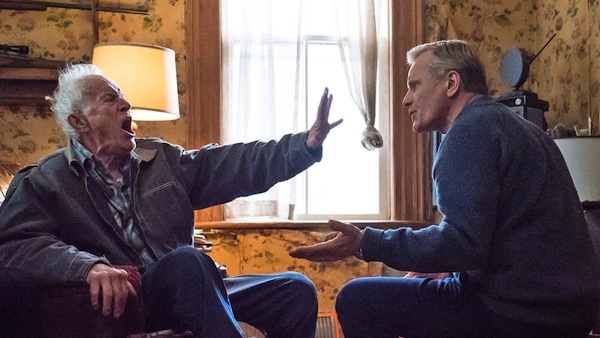 In February 2016, the Jewish Independent published my column “Dementia, cinema’s darling,” in which I reviewed seven films about people struggling with dementia. Well, here we go again! This pandemic year has seen the release of four extraordinary films that feature people struggling with the symptoms of dementia, those with the illness and those who are close to them.

These films opened my eyes not only to the symptoms of Alzheimer’s disease, but also how the affected persons perceive what is happening around them and how that altered reality affects loved ones and family members. After having watched these four unique films, I feel like I have taken a course in how dementia evolves, and how it feels to suffer through the gradual deterioration of the self. I have been shocked, educated and enriched by these moving works of art.

Falling (2021): Viggo Mortensen writes, directs and stars in this lacerating drama about a son dealing with his father’s mental decline. Lance Henriksen plays the father Willis, a foul-tempered, bigoted man, filled with intolerance and invective. His meanness is hard to watch. The flashbacks inform us of the subdued menace of Willis, they scrape your senses like sandpaper. John, the son (Mortensen), must call on all his reserves of patience, understanding and love to withstand the onslaught. (I watched it on TIFF Bell Lightbox, but do a Google search to see where it is streaming now.)

The Father (2021): French writer and first-time director Florian Zeller presents a frightening new angle with this movie, which aims to mirror the confusion and discomfort of encroaching dementia. Anthony Hopkins, 83 years old, takes us from the realm of sympathy to empathy. It is disturbing and brilliant. Hopkins, as the father, nails the way in which people learn to cover for their mental mistakes. The supporting cast is excellent, and Hopkins won the best-actor Oscar for his depiction of a mind in decline. (It is on TIFF, but do a Google search.)

Supernova (2020): Stanley Tucci and Colin Firth dazzle as a couple facing their fears. Tusker and Sam have been together for decades. The careers of both have been put on hold because Tusker has been diagnosed with early-onset dementia. They set out on a road trip. Harry Macqueen, the director, has created a drama about love and mortality. The northern English scenery is stunning, as are the performances of these two people stoically accepting mortality. (It is on TIFF and is also accessible on Apple TV+ and perhaps elsewhere.)

Two of Us (2021): An older lesbian couple is met with unexpected devastation in the aching romantic drama by Filippo Meneghetti. Nina (German actress Barbara Sukowa) and Madeleine (Martine Chevallier) have waited decades to love one another freely. They are preparing to leave France for new beginnings in Rome. First, Madeleine must come out to her children before realizing her dream, but tragedy strikes before she can speak her truth. Sukowa is ferociously great as a woman whose devotion is as fierce as her determination to drag her lover into a more honest life. This is a film of profound intimacy between two people. In French with English subtitles. (It is available at TIFF Bell Lightbox.)