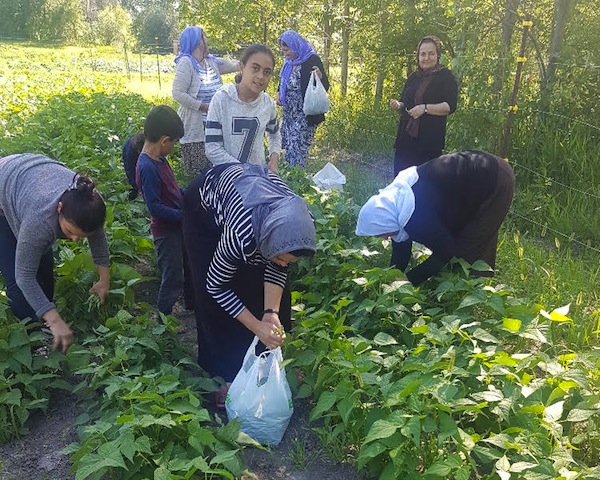 Operation Ezra in Winnipeg has expanded to include farming and selling local produce. (photo from Operation Ezra)

When the Operation Ezra committee in Winnipeg decided to produce a book about the efforts of Yazidi-Winnipegger Nafiya Naso and Operation Ezra, the local Yazidi community was very excited about the idea, about passing down their story in writing to future generations, as their tradition is largely oral.

Operation Ezra: Winnipeg’s Jewish Community-Led Interfaith Response to Survivors of the Yazidi Genocide was launched on Sept. 24 at the JCC Berney Theatre. The event included a few words from the author, Chana Thau, as well as from Operation Ezra (OE) leaders, and a panel discussion. The 71-page paperback includes photographs, interviews and various facts about the Yazidis and how OE came to be, among other things.

“When I first held the book in my hands,” said Naso, “it felt really special and I felt really proud of everything we had accomplished. Having it all in one text to give to people in the community and outside the community, to show what a small group of individuals was able to accomplish in the span of four-odd years, I’m very proud of it.”

Belle Jarniewski, director of the Jewish Heritage Centre of Western Canada (JHCWC), who has been involved in OE since its inception, said it was a grant from the Jewish Foundation of Manitoba that allowed the book to be published.

“By the time the book was written, there was so much more that we had done, but we thought it would be a nice way to let more people know about this wonderful multifaith initiative,” said Jarniewski.

Each of the families that OE brought to Winnipeg was given a book, including the most recent new-to-Canada family of 10, who had arrived just before the book launch.

Apart from OE’s ongoing efforts to bring more refugees to safety in Winnipeg, the endeavour has been helpful in settling the families already there. Both Nafiya and her sister, Jamileh, were invited to separate events in Europe over the summer to share the story of OE and some insight as to why it is so successful.

“We don’t really know if Operation Ezra can really be done anywhere else,” said Nafiya Naso. “Just because the community here is so welcoming and open, and it would be ideal if every city and every country in the world was like this … realistically, it’s not. Within the larger spectrum of the refugee crisis, a lot of people have very negative perceptions of refugees, without knowing the different types and layers of what refugees are, who they are, and things like that. So, even for us, education was a huge piece – letting people know who the Yazidis are and what’s happening.”

A group of individuals in Germany has been eager to incorporate some of the OE approaches. Naso said one of the main things that has made a huge difference is that OE is multifaith. She suggested that people wanting to undertake similar initiatives start by reaching out to faith-based communities and local businesses to find out who might want to become involved.

One of the more recent aspects of OE that has caught the attention of other communities around the world has been the farming project that started up two summers ago on a small plot of land.

“We had one of our volunteers whose father was a farmer with a lot of land, a potato farm, so some of the community went and helped out and got huge bags of potatoes after, and we had media coverage of it,” said Naso.

“The pastor from Charleswood United Church connected us to the owner of Shelmerdine Garden Centre,” she added. “He donated about five acres of land this summer and the community was harvesting it and they were able to sell some of the leftover produce and make money, and that money then came back into the community.

“This is not only a way for them to work and be involved in the community, but it’s also very therapeutic, especially for the women who have gone through the brunt of what ISIS committed and is continuing to commit.”

The land is located just outside of Winnipeg’s city limits. The families worked together and carpooled there to grow and harvest the produce and sell the excess at Shelmerdine, the Rady Jewish Community Centre and Charleswood United.

“Almost all of our families have vehicles, so everyone will go pick up a couple people, and that’s how we transport everyone,” said Naso. “A couple of times, too, we’ve used a bus, bringing the whole community out there – the kids and everyone – renting a bus or two to get everyone out there.”

“This has been just such a wonderful experience for them,” Jarniewski said, “because this is what most of them already knew, what most of them did in Iraq. Not only have they grown food for themselves, but they have been selling the produce. So, this has been a very positive project and we hope to expand it more next year. They will be able to feed the Yazidi community all winter with the kinds of vegetables you can put into cold storage, like beets and potatoes.

“Now, it’s an exponential growth. They really grew all kinds of things. I would see them here, at the Rady, when they were selling celery, beets, onions, zucchini, you name it … even mint and basil.”

Operation Ezra: Winnipeg’s Jewish Community-Led Interfaith Response to Survivors of the Yazidi Genocide explains the background of the Yazidis, a monotheistic religious minority in northern Iraq that was displaced and persecuted by the Islamic State group in 2014. It also goes into the efforts of the Jewish community to lobby the federal government to bring Yazidis to Canada and to resettle families in Winnipeg via private sponsorship. Sales of the book ($10 each) support the ongoing Operation Ezra efforts – it can be ordered from Jewish Child and Family Service Winnipeg by calling 204-477-7430.