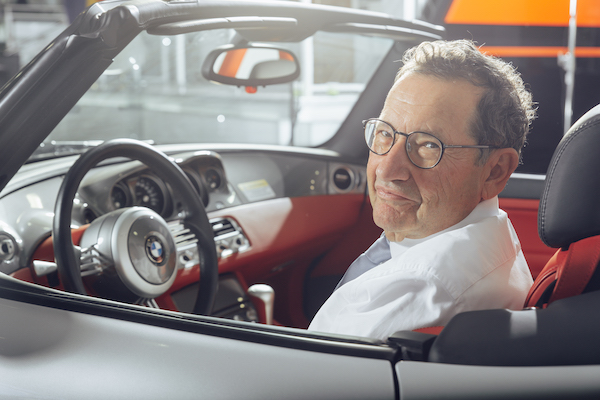 Brian Jessel has loved cars since he was a kid. (photo by Alfonso Arnold)

Brian Jessel chose one of the most consequential years in Vancouver’s history, 1986, to embark on his self-named BMW dealership. Since Expo 86, both the city and Brian Jessel BMW have changed, but, according to Jessel, one thing remains constant.

“We take a personal approach to the car business. We cherish our relationships with our clients and like to spoil them and treat them as VIPs. This is how I want to be treated, so this is how I grow my business relationships,” Jessel said in a recent interview.

And he also works to grow community. Among the organizations that have benefited from his philanthropy are Jewish Federation of Greater Vancouver, Jewish Family Services, Congregation Schara Tzedeck, Lubavitch BC, the Jewish Museum and Archives of British Columbia and the Isaac Waldman Jewish Public Library.

In the general community, Jessel’s Cabriolet Charity Galas, started in 2004, are among the premier philanthropic events of the year in Vancouver. The annual galas, which raise money for pancreatic cancer research, have brought in more than $2 million and have seen the likes of talk show host Jay Leno and blues singer Colin James perform in the past.

Enthusiasm for the automobile runs in Jessel’s family. His father, Bernie, a leading figure the Toronto car market, instilled a fascination with the industry – an excitement that has carried through to future generations.

“I loved cars from the time I was a toddler; it’s probably in my DNA. I now have a 4-year-old grandson who is exactly the same; he sleeps with cars in his bed and won’t let go of the steering wheel if he gets into the driver’s seat. I bought him and his 6-year-old brother cars – yes, real cars. I just need to wait 12 years to give them to them,” he related.

The desire to be in the car business maintained such a strong pull for Jessel that other career possibilities did not stand much of a chance.

“I went to university (in Michigan) but never graduated – I wanted to get to work. I interviewed at a prestigious Bay Street stock firm and was accepted for the position, but I never started. A couple of weeks later, I was selling cars at a classy GM dealership on the west side of Toronto,” he recalled.

Eventually, in 1972, he made it out west, opening his first used car lot with six automobiles on a leased space at Burrard and 1st Avenue. Jessel sensed the appeal of foreign cars, even back in the 1970s, and turned that first car lot into a Fiat dealership – along with selling pre-owned vehicles, specializing in imports.

“These were days when, if a Jag went down the road, people stopped and looked,” said Jessel, who also attributes his success to having the gumption to take a chance when opportunity comes calling.

Before establishing itself at its current location in Vancouver in 2004, Brian Jessel BMW operated out of locations in Langley and Coquitlam. Today, it occupies a 66,000-square-foot new-car facility on Boundary Road, with an additional 36,000 square-foot pre-owned-car space nearby. Brian Jessel BMW sells more than 5,000 cars a year.

Jessel gives much of the credit to his staff for his thriving business. “Our people are knowledgeable but also warm and engaging,” he said. “And we are laser focused on all things BMW. We aren’t using a cookie-cutter format that works for selling everything from Bentley to Hyundai, like large dealership groups need to be. Yet we are the size of five dealerships, so we still have all the economies of scale of the multi-brand.”

When asked about the differences in running a dealership now as opposed to 35 years ago, he said, “As with everything in the world, the computer has changed how cars operate. Twenty years ago, I went to Europe and drove the upcoming BMW 7 Series. It had a dial in the centre console that controlled many of the car’s functions. Auto journalists hated the iDrive System when they first saw it. Now, almost every manufacturer has followed BMW’s lead and has a similar operating system.”

And there is the move to electric vehicles as well.

“The new frontier is the electric car. There is a mystique I like about electric cars,” he said. “They are so quiet and have amazing low-end power. I still love the feeling of an internal combustion engine, however, it is inevitable that electric vehicles will dominate by the end of this decade.”

Brian Jessel BMW has started taking orders for the new BMW iX, as well as the four-door sedan version, the BMW i4 – both of which are fully electric.