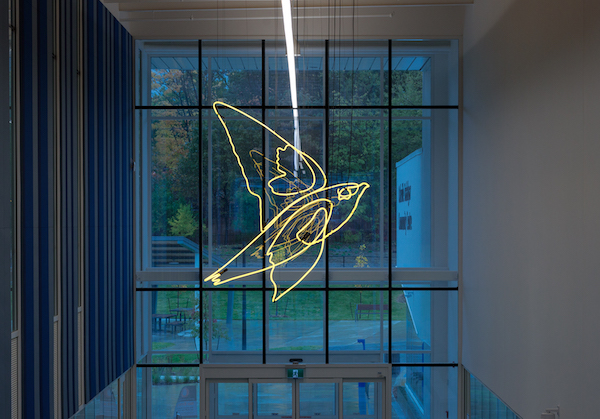 Barb Choit’s “Ravenous Appetite and Boundless Energy” features a chimney swift that can only be recognized as such from one vantage point. (photo from Barb Choit)

Last October, in a year that could be considered one of the worst in history for artists overall, Vancouver artist Barb Choit completed a large public art project in Oakville, Ont. “Ravenous Appetite and Boundless Energy” is the image of a bird, a chimney swift, created from hand-drawn, coloured, lead-glass tubing filled with neon. It is installed in the Oakville Trafalgar Community Centre.

“Most public art projects are by invitation only. However, for this one, I responded to an open call put out by the Town of Oakville,” Choit told the Independent in an email interview. “With this process, the first step is to send a letter of interest describing your qualifications and approach. From that, a public art jury selects a smaller group of artists to create a design for an artwork, which is called a ‘concept proposal.’ Each artist makes a presentation of their proposal and one is selected to create their proposed project.”

Winning the competition, it took her one-and-a-half years to convert her original idea into the final installation, a bird in flight, soaring just under the ceiling of the community centre.

The chimney swift has special significance for the Oakville community, said Choit. “The work responds to the transformation of the adjacent, abandoned Oakville High School into a habitat for a colony of chimney swifts, a threatened migratory bird. Every year, residents of all backgrounds come to watch birds roost in the chimneys of the former school. The community’s galvanization around birdwatching inspired me to represent the chimney swift as an ‘artifact’ of the culture and spirit of Oakville.”

In Choit’s installation, visitors to the centre can only see a bird in the design from a certain perspective. If they look at it from other positions, all they see is a wriggle, written in shining neon.

“For ‘Ravenous,’” she explained, “I used a display strategy employed by science and nature museums to spark the viewers’ interest in the natural world – an optical illusion, anamorphosis. It is a visual illusion in which an object is distorted so that it can only be recognized from a specific vantage point. The sculpture appears abstract to viewers moving through the space. Yet, from a specific vantage point, a representation of a bird appears. Many people find optical illusions particularly engaging. Creating a visually striking piece was crucial to engaging a multi-generational community. And the glowing yellow form complemented the space for which I was designing the work.”

The word “illusion” suits the chimney swift as a species. According to Wikipedia, during flight, the birds often appear to beat their wings asynchronously, but photographic and stroboscopic studies have shown that they beat them in unison. The illusion that they do otherwise is heightened by their speedy and erratic flying, with many rapid changes of direction.

Choit’s choice of medium for this work necessitated collaboration with the manufacturers of the neon-filled tube.

“Different projects require a different balance between collaboration and delegation,” she said. “My recent project uses neon, which requires a type of industrial fabrication that includes hazardous materials and live electricity. It wouldn’t be practical or advisable for me to carry out this part of the fabrication myself. However, one needs a grasp of how materials work in order to create a feasible design and communicate with fabricators.”

She compared it to the architectural process. “In order to design and build a successful building, an architect does not show up at the building site with a hammer and nails,” she noted. “However, she must know how a building is constructed, as well as the properties and possibilities of the materials used.”

As she has done for other works, Choit did extensive research for this installation.

“People know me for my photographic work, but I have worked in most mediums at one point or another,” she said. “Within my work, I look at how communities and individuals imbue objects with meaning. Most of my major projects involve cultivating collections and working with archives. I explore this theme in a variety of media, such as photography, installation, performance and sculpture. Recently, I have had commissions for 2-D and 3-D public artworks.”

Choit’s interest in collections is longstanding. She has a master of arts in critical and curatorial studies from Columbia University in New York. “At Columbia, I researched institutional frameworks for art,” she said. “I wrote my thesis on the history of collecting. This area of academic research still drives my work as an artist.”

Public art is a relatively new area for Choit and she is exploring the possibilities. “I primarily make works to be shown in galleries; it is only recently that I have moved into public art. I like public art because the projects can be much more ambitious than something that would be purchased by an individual. However, I still enjoy making smaller works that can be appreciated privately and I am open to larger site-specific commissions to be installed in privately owned buildings and outdoor spaces.”

She is planning to do more work in the public sector, despite the challenges. “Usually, public art projects are by invitation. There are also a few websites that list opportunities for artists to submit their qualifications, with the intention of being shortlisted to create a proposal for a specific project,” she said, noting the need to be wary of fraud.

“Artists need to be careful of websites that list art opportunities because there are dubious organizations out there to exploit them,” she said. “For example, some art ‘opportunities’ ask artists to pay a fee to be considered for a project. Artists should never pay a fee to have someone look at their work.

“Also, some organizations solicit full proposals from artists. Creating a proposal is an immense amount of work and a highly specialized skill. For legitimate public art calls, artists who are shortlisted to create a proposal are paid a fee for this work. I discourage any artist (or anyone, for that matter) from engaging professionally with an organization that expects unpaid work.”

Among Choit’s previous public works is the photographic project “Campaign,” a billboard series commissioned by the Capture Photography Festival in Vancouver in 2017. “It was a series of outdoor billboards based on my 2015 photography project where I remade Andy Warhol’s shoe Polaroids from the 1980s. I documented a collection of vintage women’s shoes using discontinued instant film and a vintage Polaroid camera from the era.”

Despite her extensive education, experience and obvious talent, Choit considers luck as one of the best ingredients for artistic success.

“Luck is crucial,” she said. “It is not necessarily about chance but infrastructure – family and community support, education, healthcare, even freedom of expression, can be just as crucial as talent and skill.”