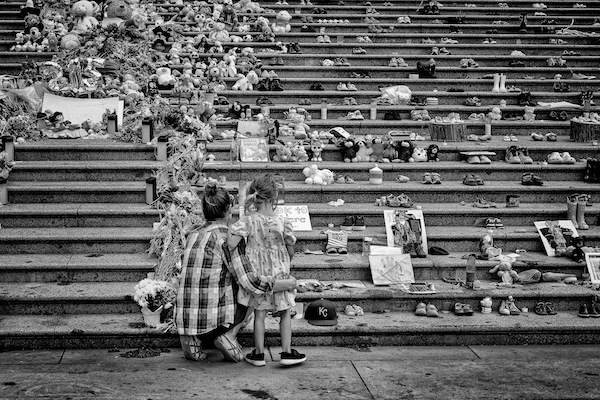 Whenever a photographer – amateur or experienced – snaps a picture, they establish a connection between themself and their subject. They shout to the world that this image at this time and in this place is an important occurrence and should be preserved and treasured.

The PhotoClub Vancouver group show, Connections, opened June 2 at the Zack Gallery. People and birds, industrial cityscapes and soothing nature shots, close-ups and panoramas – every image in the exhibit tells a story about the world and the photographer’s place in it.

The club was officially established in 1998. Its friendly, non-competitive environment for photographers of all skill levels encourages members to develop their technical and artistic abilities through various activities, including peer critique, field trips, workshops and seminars. And, of course, exhibitions like Connections, which allow members to share their art beyond the group.

Some of the photographers took the Connections theme literally, like Ivor Levin’s “Roped In.” The orange ropes in the image are taut and sure, but the objects they hold together are left outside the frame. Only the connection itself is important to the artist.

A similar approach characterizes Lynn Copeland’s “Cranes and Planes.” The image’s graphic simplicity is almost abstract, as the harsh lines of the industrial cityscape, viewed on the background of the distant sky, induces the sense of a steel labyrinth where any uninitiated human would be lost.

Barb Kaiser’s “Hanging Around” also includes ropes as the connecting medium, but the feeling it inspires is vastly different. A window washer hangs in his harness in the foreground, doing his job. Behind him, a skyscraper-studded panorama of North Vancouver is visible in all its urban majesty. We are all connected, the image seems to say, in every window of every building.

Unlike the stark, sharp-angled industrial imagery, logical and attractive on a cerebral level, the pictures reflecting nature flaunt softer lines. They appeal to our emotions. For example, Terry Beaupre’s “Canada Geese Flying Off Together” depicts two geese. Their dark silhouettes soaring together on the background of a pink sunset evoke ideas of love and companionship. “I couldn’t have asked them to pose more perfectly for me,” Beaupre says in her artist’s statement, although she admits that she painted the dramatic colours of the sunset later on, to enhance the picture.

The grace of a couple in love is also implied in another bird picture – Levin’s “Peck.” The two doves in the image are sharing a kiss. Or maybe they are sharing a bug to eat. Whatever they are sharing, their affection for each other is unmistakable and heartwarming.

The charm of the loving doves is absent in Drago Tutnjevic’s “Bus Stop.” The four people standing in line to board a bus are strangers. Their estrangement is made even more obvious by the fact that three of them are absorbed in their phones. The one not on the phone looks straight ahead, thinking her own thoughts. No doubt, each of the passengers has multiple connections – their friends, family and others – but here, at this bus stop, nothing connects them except the expectation of the bus itself. The photo reflects the complex networks that link us all, as well as the separateness of every person in our huge technology-permeated world.

In contrast, a simple path in the park, portrayed in John Konovsky’s “Onward No Matter What,” reminds us of the mysteries of childhood adventures and the romantic wandering of our youth.

Another image reminiscent of the joy of childhood is David Beaver’s “Balloon Man.” Even in black and white, the man holding bunches of balloons in both hands brings to mind birthday parties and vacation frolicking. The photo is part of the club’s Henry Ballon B&W Challenge.

An entire wall of the gallery is reserved for the black and white photographs, by different photographers, all parts of the challenge, which was started in 2015 in memory of the late Henry Ballon. Ballon was an avid monochrome photographer and advocated photography with minimum retouching by any software. Club members honour Ballon by creating their own art using his principles. The photos demonstrate how deep the artists can reach, even if their expression palette is limited to the gradations of black and white.

But the most visceral and poignant image in this exhibition is “Remembrance” by Michael Shevloff. A mother crouches beside her young daughter in front of a staircase. Their backs are to the viewer. They face the stairs together, just like everyone who looks at this photograph. And on the stairs reside memories. Toys. Shoes. Hats. Books. No people. What does this young mother tell her child? Who were the owners of the objects on this staircase? What happened to them? Where? When? The photograph raises many questions, and all of them remain unanswered – unless the artist decides to answer them, which Shevloff did.

“The photo was taken at the Vancouver Art Gallery, where there was an outdoor installation commemorating the discovery of the unmarked graves found at a residential school recently. It affected many people and brought a dark period of history to light. Flags were lowered across Canada for many months.

“I took the photo on July 1st of 2021. Normally on Canada Day, there are parades and many people celebrating our history. However, last year, with the pandemic and the dark events I mentioned above, it seemed like no one was celebrating our national day.

“In the photo a woman is talking to her child. In my mind, I tried to imagine how she would be explaining the memorial and the events surrounding it to her daughter. Just as the memory of the dead children is elicited by the installation, the mother and child are also photographed from behind and also remain nameless in time.”

Connections is on display until June 27. For more information, check out photoclubvancouver.com.