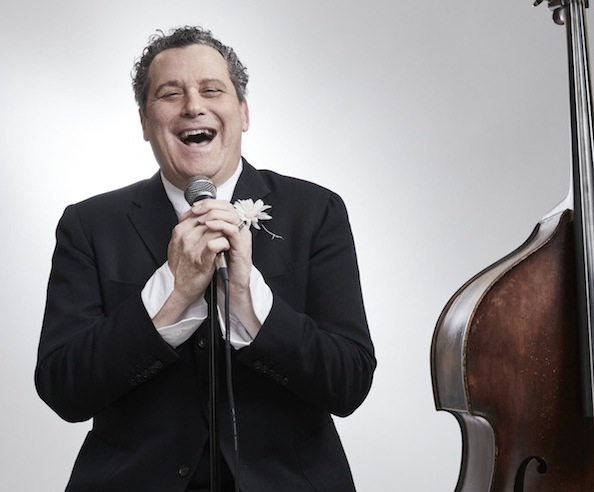 Isaac Mizrahi’s cabaret show, which is at the Rio Theatre on March 18, is a preview of his new book I.M.: A Memoir. (photo by Britt Kubat)

Celebrated fashion icon Isaac Mizrahi is bringing his multiple talents to Vancouver. On March 18 at the Rio Theatre, he will be performing his cabaret show I & Me, accompanied by the Ben Waltzer Jazz Quartet.

Mizrahi’s North American tour is timed with the release of his new book, I.M.: A Memoir (Flatiron Books). The show, which includes poignant stories and fun songs, covers anecdotes about his life, his mother, what it was like growing up in an Orthodox Jewish Syrian community in Brooklyn, the challenge of being gay, and rising to the top of the fashion world. “It’s done with a lot of humour,” he told the Independent. “I hope it’s compelling, amusing and resonates with the audience.”

The songs, he explained, go along with the story. “I chose songs that can dramatize the story,” said Mizrahi, who has performed with Waltzer in clubs for more than 20 years. “My opening number is ‘I feel Pretty’ and, believe it or not, I am not singing it with irony.”

Mizrahi also delivers his own rendition of Cole Porter’s “You’re the Top.”

The first time Mizrahi showed off his talents in front of a crowd was in elementary school, when he started doing impressions for his peers.

“When I was about 7 years old, I went to see Funny Girl with my family and was so inspired by [Barbra] Streisand I started imitating her. Then I impersonated Judy Garland and Liza Minnelli,” recalled Mizrahi, who attended yeshivah from kindergarten through eighth grade. “I would do these female impressions inappropriately in places like the lobby of shul!”

But it was designing clothes for the rich and famous that made Mizrahi a household name. When he entered High School of Performing Arts in New York City, he had planned on going into show business. However, by the time he was a junior, he switched gears and found a better way to express himself. “I realized all my friends were gorgeous, thin, blond and movie-star types, and I was fat and I didn’t have that self-image,” he said. “So, I re-thought my career and decided to work in the fashion industry. It enriched me so much, and gave my life a different kind of story and platform.”

His interest in the world of fashion didn’t come from out of the blue. His father was a children’s clothing manufacturer and Mizrahi, who was obsessed with reading fashion magazines, had sewing machines at his disposal. “I started to make puppets and sew clothes for them,” said Mizrahi, who added that he liked doodling sketches of outfits in the margins of his Hebrew books. “By the time I was 10, I had this big puppet theatre in the garage and I made their clothes. My father had sewing machines everywhere and he taught me how to sew. By the time I was 13, I was a really good sewer and I started making clothes for my mom and myself. It became this fun, compelling thing. My mom, who is now 91 years old, was really into fashion and encouraged my interest.”

After high school, Mizrahi attended Parson’s School of Design in New York City. His first fashion job was working at Perry Ellis, then with designer Jeffrey Banks, and then Calvin Klein. Along the way, he honed his skills, in such areas as selecting fabric, sketching clothes and participating in design meetings. By the time he was 26, he went out on his own.

In 1989, he presented his first show, which catapulted him into fame and his couture soon dominated the fashion mags. He dressed celebs for red carpets, and his clients included Michelle Obama, Meryl Streep, Hillary Clinton and Oprah Winfrey.

“Designing for Michelle Obama was such a thrill,” he said. “And Barbra Streisand was so lovely. I tailored a suit for her and Women’s Wear Daily erroneously attributed it to Donna Karan. Barbra wrote me a note saying, ‘We know who really made this suit!’”

But Mizrahi’s successful journey has had its lows. While he made countless guest appearances on television and in movies, earned an Emmy nomination for best costume design for his work in Liza Minnelli Live and was the subject of the acclaimed documentary film Unzipped, which chronicled his 1994 collection, his company was losing money and closed after his fall 1998 collection.

He returned to fashion in 2002, teaming up with Target and becoming one of the first high-end designers to create affordable clothes for the general public. In 2009, he launched his lifestyle brand Isaac Mizrahi Live!, sold exclusively on QVC. In 2011, he sold his trademark to Xcel Brands. Among his many credits, he hosted his own television talk show, The Isaac Mizrahi Show, for seven years; he wrote two books; and he narrated his production of the children’s classic Peter and the Wolf at the Guggenheim Museum. In 2016, he had an exhibition of his designs at the Jewish Museum in New York. Currently, he sells on QVC and via Lord & Taylor, and serves as a judge on Project Runway: All Stars.

Throughout all of his fashion endeavours, he has found time to be on stage. Mizrahi, who is a charming storyteller, said he loves doing live cabaret. “I hope the audience will really enjoy themselves when they see my show, and laugh and enjoy the music,” he said. “I want them to get the idea who I am and how I got there – and I want them to know the story of my life.”

When asked what he’d like his legacy to be, the designer, entertainer and showman referred to his Judaism. “My name is Isaac, which means laughter in Hebrew,” said Mizrahi, who considers himself a cultural Jew. “I think, most importantly, I want my legacy to be about humour.”

Tickets to I & Me at the Rio Theatre are $58 in advance and $60 at the door. They can be purchased at riotheatre.ca/event/isaac-mizrahi-i-me. The March 18 show starts at 8 p.m.