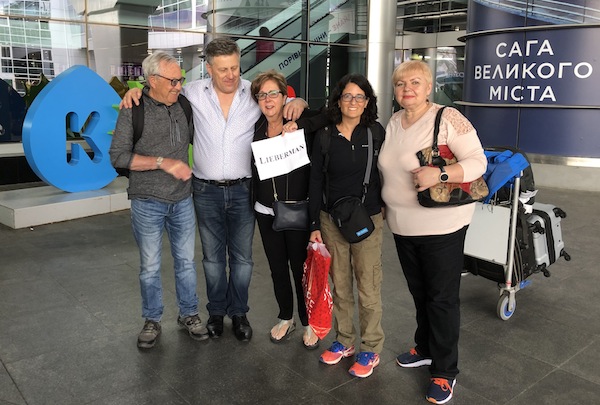 Left to right: Lucien, Grisha, Carole, Leanne and Svetlana at the airport in Kyiv, Ukraine. (photo from Carole Lieberman)

My husband Lucien, our daughter Leanne and I recently traveled to Kyiv, Ukraine, to meet Lucien’s first cousin and his family for the first time.

History has an interesting way of unfolding. Lucien’s father was one of 10 children born in Russia. The oldest daughter Sophie immigrated to Canada in 1912, to marry a farmer living in Rumsey, Alta. In 1923, Lucien’s grandparents, along with four of their children, including Lucien’s father Leo, made the cross-Atlantic journey from Russia to Alberta. Sadly, in 1927, their daughter Lucy, for whom Lucien was named, ended her life there at age 25 and, in another tragedy, their daughter Sophie, mother of five young children, was widowed.

Shortly after these tragedies, their daughter Manya chose to return to Russia on her own. And, in 1928, the grandparents were determined to return to Russia. And so, in November of that year, two brothers – Leo Lieberman, 33, and Sam Lieberman, 29 – embraced at the Calgary CPR station. Sam was escorting their parents back to Russia. Since their parents were in their 60s and were considered elderly, they could not manage the trip on their own. Sam expected to return to Canada once their parents were settled in Kharkov, but he never did. The brothers’ last words were about Leo’s new winter coat. “Leo, I like your coat. Where I am going you can’t find such a coat.” So, the brothers exchanged garments. They did not meet again until 1966, when Leo and his wife Clara went to the Soviet Union to try and find family.

Lucien grew up in Calgary aware that his parents had both left large families in the Soviet Union and that the Second World War had devastated those families. Sam’s story was tragic. He worked in Moscow in the 1930s as a translator. When the war came, he was taken into the army and survived four years in combat roles. He was wounded and, in 1946, he was arrested, charged and tried for the offence of being “anti-social to the regime” and sent to the Gulag, where he laboured for 10 years in a camp beyond the Arctic Circle. After Stalin’s death, Sam was discharged and allowed to return to his city of last residence, Chernivtsi in the Ukraine. There, at the age of 57, Sam married a younger woman and fathered a son, Gregory (Grisha).

The next generation of family in Canada always knew about Uncle Sam and Cousin Grisha. We had heard that Grisha lived in Madagan, which is closer to Anchorage than to Moscow. Decades passed without any contact but finally, in 2016, we learned that Grisha, his wife Svetlana and their two children were living in Kyiv, the capital of Ukraine. We met our new cousins on Skype in 2017 and began to catch up on decades of this lost connection.

Grisha and Svetlana’s son, Stanislaus Lieberman, is married to Natasha, has a 2-year-old daughter and is a lawyer in Kyiv. Their daughter,

Tatiana Lieberman, affectionately called Tinotchka, is known throughout Ukraine as Tina Karol (tinakarol.com). Tina is a renowned singer who represented Ukraine in the 2006 Eurovision competition at age 21. She is the “face of Ukraine,” with billboard ads throughout Kyiv for Huawei and many cosmetic companies, and has the largest fan club in all of Ukraine. Her 10-year-old son Veniamin attends school in England and returns to Kyiv frequently. Tragically, Tina’s husband, Eugeny Ogir, who was her manager, died in 2013 at the age of 33, shortly after being diagnosed with an aggressive form of cancer.

Grisha speaks a reasonable amount of English and, thanks to Google Translate, we communicated well. We came to feel very close to our cousins after many Skype visits and plans were made to visit. There was no discussion – they insisted that we stay with them in their apartment so we would really get to know one another. It certainly was not our custom to stay with people we had never met in their two-bedroom, 1.5-bathroom apartment for eight nights but the visit was incredibly memorable and very special. Days before our arrival, Svetlana wrote that “they were trembling with anticipation.” We felt the same.

Our daughter Leanne, a teacher and a published author, met us at the airport in Kyiv. We were welcomed at the airport with a “Lieberman” sign and the warmest hugs and happiest tears. Throughout the visit and several times every day, Grisha would grab Lucien, hug and kiss him, saying, “You are my dear cousin.” Despite the 18-year age difference, there was a very strong cousin connection between the two men, cemented further by the traditional home-cooked Ukrainian food that we were so generously fed each day. We awoke to the smell of kreplach, borscht, haluptsi, cheese latkes and potato pancakes prepared by Svetlana and we enjoyed eating delicacies such as forshmuk, a chopped white fish salad. It was food that was so reminiscent of what Lucien’s mother had prepared for him when he was growing up in Calgary. We all laughed together when we were offered barbecued “kitchen.”

Our entire week was planned in advance and included not only family visits and meals, but a visit to a wonderful Ukrainian folk dance show at a huge auditorium where we were seated in the president’s box, welcomed with a champagne reception and presented with traditional Ukrainian outfits for Vishivanka, all arranged by Tina. Tina’s driver took us to a 26-acre monastery for a private tour and we were taught how to make varenikes in a private master class at lunch.

We gained a good sense of Tina’s personal life when we visited her stunning home and gardens, complete with a 24-hour armed security guard. Tina’s fans adore her and swarm her when they see her out in public.

Kyiv is a stunning city, with the Dneiper River running from north to south. The climate is warm in spring and the air is often beautifully fragrant with the scent of acacia trees, stronger in the morning and in the evening when we all strolled along the river. It has beautiful kashtana (chestnut) and lilac trees and a number of impressive bridges and lookouts. There are many parks, huge squares and an excellent subway system, accessed with the longest imaginable escalators. Like so many cities, it has far too much traffic (propka).

Tina arranged a private guided tour of Babi Yar for us with an English-speaking local woman. Babi Yar is now a beautiful treed park approximately a kilometre square in the northwest outskirts of Kyiv. On Sept. 29, 1941, Nazi troops rounded up Kyiv’s 34,000 strong Jewish community and massacred them all within 48 hours. Victims were shot and buried in the ravine. The Nazis then rounded up the local Romany people and residents of mental hospitals and extended the killing. During the two-year Nazi occupation, more than 100,000 bodies were dumped into the Babi Yar ravine. When the Red Army recaptured the city in 1943, there were only 80,000 people in Kyiv, one-tenth of its former population.

Today, there is little evidence of a deep ravine, only undulating terrain. There are numerous monuments, some remembering the many children killed, several with Hebrew inscriptions, and a beautiful bronze wagon, which depicts a typical Roma caravan. After the dissolution of the Soviet Union, the Ukrainian government invited the state of Israel to erect a monument, which was done in the form of a large menorah. Babi Yar is possibly the most prominent site representing the Holocaust in the former Soviet Union.

During the week that we were in Kyiv, a new president was sworn in. With Svetlana, we watched the televised inauguration of President Volodymyr Zelenskiy, a 41-year-old former comedian and the first Ukrainian president with a Jewish background, and we loved seeing Svetlana proudly sing the national anthem, in tears.

We visited Maidan, the central square of the city, saw the parliament buildings and surrounding Marinsky Park. We toured a fascinating military museum, visited an old synagogue and were taken to the famous opera house, where we thoroughly enjoyed seeing the ballet.

Every day was full of memorable moments. We spent several evenings sharing family photos – it was fascinating to see photos of us from the 1970s and ’80s, which were mailed to them by my in-laws and other relatives before we lost contact. We laughed, hugged, cried and shared stories, always with “Grishinke” grabbing and kissing “Lucienke” and proudly saying, “you are my cousin.” Together Grisha and Lucien enjoyed shemiskes, aka sunflower seeds, that only people who were raised by siblings would enjoy the same way.

We celebrated our last night together at a beautiful restaurant overlooking the river and marveled that the restaurant, like many other quality restaurants, had an excellent playroom where Stanislaus’s daughter Vesta played while we dined.

When we finally hugged everyone goodbye and thanked them for a visit that exceeded every expectation, Grisha responded, “I am the son of Sam.”

In 1951, after spending five years in the Gulag, a fellow prisoner was released and Sam asked him to please send a letter to his brother Leo informing him that he was still alive, giving him the address – Leo Lieberman, Calgary, Alberta, Canada. When the man was able to mail the letter, he omitted “Calgary” and the letter ended up in the Edmonton post office. The letter was sent to a Mr. Lieberman in Edmonton by a caring employee and was subsequently forwarded to Leo Lieberman in Calgary.

Carole Lieberman, a longtime Vancouver resident, is originally from Montreal. She is a mother of three, grandmother of four, and has enjoyed selling Vancouver real estate for almost 30 years.