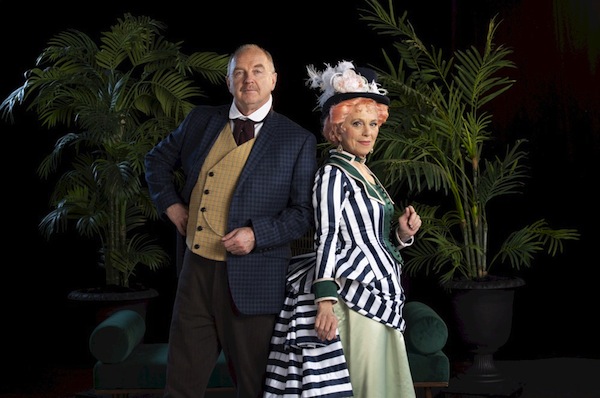 Ric Reid and Nicola Lipman co-star in The Matchmaker, which is at the Stanley until Feb. 24. (photo by David Cooper)

If you are an aficionado of the absurd, an enthusiast of the exaggerated, a supporter of slapstick and an overall buffoonery buff, then set a date to see The Matchmaker.

Thornton Wilder’s work has taken over the Stanley Theatre with all the intensity and madness a play can muster and keeps farce fans delighted from opening curtain to final applause.

Matchmaker, which was first staged in 1955, is the retelling of Wilder’s original farce The Merchant of Yonkers and was a precursor to Hello Dolly!, one of the most popular Broadway plays of all time. It was made into a movie in 1969 starring Barbra Streisand in the title role of Dolly Levi.

Levi – played by Nicola Lipman in the Arts Club production – is the thread in the play that winds its way through four relationships of star-crossed lovers and would-be elopers. She’s a woman who “arranges things,” but is generally bored with life. The forceful matchmaker goes to Yonkers under the pretence of finding a wife for the crotchety Scrooge-like storeowner Horace Vandergelder (Ric Reid). Her real motive, however, is to snatch Vandergelder for herself.

Along the way, Levi tries to cement the relationships of Vandergelder’s niece, Ermengarde, and struggling artist Ambrose Kemper; milliner Irene Molloy and Vandergelder’s chief clerk, Cornelius Hackl; and Molloy’s assistant Minnie Fay and store clerk Barnaby Tucker. Quite a bit of work for one day, but Levi is ready to put in the effort if it will get her what she wants. She even goes so far as to make up an extensive story that she tells Vandergelder about a fictional 19-year-old potential spouse, just to keep him from marrying anyone else. And she tells Molloy that Hackl is a millionaire known in the best levels of society in order to ensure Molloy loses interest in Vandergelder. And that’s all just in the first act!

The second act brings all the characters together at the home of Flora Van Huysen, a friend of Ermengarde’s late mother, who Vandergelder hopes will keep Ermengarde and Kemper apart. But, it turns out the over-the-top opera-singing spinster is a romantic at heart and, despite a series of confused identities, manages to bring all the relevant couples together.

Now, it’s understood that a farce is comprised of ludicrous situations, improbable plot lines, absurd characters, exaggerated fashion and just about anything that falls under the categories of irony, satire and bad wit. Even so, I expect there to be some consistency within a person’s character, some personality traits that remain the same despite the nonsense of any given situation. I found that missing (or misdirected) in Molloy, one of the key characters, and an original love interest of Vandergelder.

Molloy is a hat-maker who admits to never having adventure in her life, and being very limited in her socializing. Yet, when she finally goes out to a restaurant, she acts like she goes out on the town every night, ordering the best food, telling people what to do, convincing the two clerks to sing in order to get a date.

Also, Molloy and Hackl supposedly fall in love at first sight. The feelings are clearly evident from Hackl’s actions, but it’s hard to get any sense of interest from Molloy.

It makes sense that Hackl, whose experience with women is so minimal, basically falls in love with the first one he meets and laments the fact that he has so little knowledge about the opposite sex.

“I’ll bet you could know a woman 100 years and never really know if she likes you or not,” he says, presenting an observation that many would say holds true.

Now, just in case you were wondering if this level of farce is your cup of tea, here are a couple of examples of the humour you’ll see. When Minnie Fay kisses store clerk Barnaby Tucker, he goes all “aw, shucks” and falls down. There’s a knee-slapper!

In another scene, they need some help from a cabbie, so they ask him, “Do you want to earn $5?” The cabman replies, “I don’t know; I’ve never tried.” (Cue the ba-dum-tshh post-groaner sound effect.)

If you enjoy these types of laughs, then Matchmaker should be right up your alley.

In a final note, kudos go out to set and costume designer Drew Facey for absolutely gorgeous visuals, and composer and sound designer (Jewish community member) Mishelle Cuttler for a score that complements the frenetic action on stage.

The Matchmaker runs at the Stanley Industrial Alliance Stage until Feb. 24. For tickets, visit artsclub.com.

Baila Lazarus is a Vancouver-based writer and principal media strategist at bailalazarus.com.