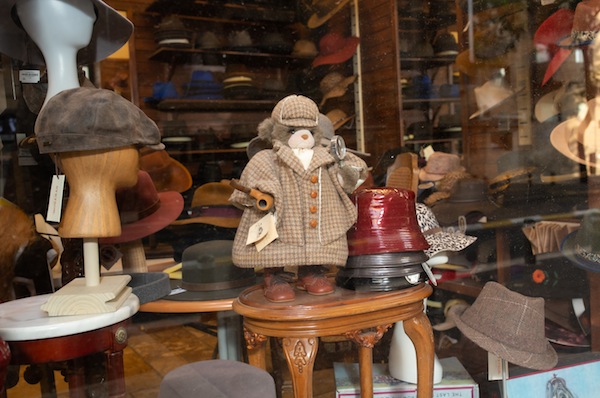 There is a small, magical hat store right in the heart of Jerusalem, called SherlockS. It’s not hard to find. Just walk along King George Street until you see a two-foot-high teddy bear dressed in a SherlockS deerstalker hat and Inverness cloak, holding a pipe in one hand and a magnifying glass in the other, perched on a table in the display window.

SherlockS is packed with hundreds of hats for both men and women. The store specializes in hard-to-fit heads and carries hats by Stetson, Bailey, Kangol, Christys’ and many other quality hat companies. There are even Borsalinos, the kind the snazzy Italians wear. SherlockS is also the home of handmade hats by local milliners like Danielle Mazin and Justine. And SherlockS makes their own Panama hats, as well.

Owner Yaacov Peterseil decided to create this store after his dermatologist warned him about the damage the sun’s ultraviolet rays were doing to his head. “You must wear a hat outside in summer and winter,” said the doctor.

“I was just looking for something to do, having left publishing,” Yaacov explained. “Could a hat store afford me the opportunity to help people by keeping the sun’s rays at bay and be financially rewarding, as well? I wondered. I had to try. So, in 2016, I opened SherlockS Hats in my garage. Before long, people came in droves to the store, which was way too small to hold both the hats and the people. So, I moved to Diskin Street, in an underground mall. But, soon, that store was too small, too. Finally, I moved to King George Street, where people could stop by, relax, get a cappuccino and a muffin, and even buy a hat.”

When Yaacov was choosing a name for his business, Sherlock and Sherlock Holmes were already taken. “So, I thought of SherlockS. SherlockS Hats has a nice ring to it. And there’s no need for an apostrophe,” he said.

Peterseil was born in 1946, in Salzburg, Austria, in a displaced persons camp. His family moved to the United States in 1949. Eventually, his father opened a wholesale clothing shop, selling ladies sweaters and T-shirts to all the big chains in New York.

“I worked with my dad for awhile,” said Yaacov. “It was there I developed a love of quality clothing.”

Yaacov believes that his varied business endeavours all led him to SherlockS Hats. He worked as a copywriter for Prentice-Hall, had his own byline in the Nassau Herald, taught journalism at the University of Michigan, was a speech writer for B’nai B’rith, founded Enjoy-A-Book Club, and owned K’tonton Book Store on Long Island. He also found time to get his rabbinic degree, and joined the rabbinate in the United States and in Newfoundland, where he taught Jewish studies at Memorial University.

In 1986, he, his wife Tamar (a family and sex therapist) and their (then) six children made aliyah. Once they settled in, Yaacov kept busy as public relations director for his mentor, Rabbi Shlomo Riskin, and developed Pitspopany Press for Children.

It was while he was busy publishing Jewish children’s books at Pitspopany that Yaacov asked me to review some of their titles. Since then, our paths have crossed a number of times.

“One of my first hat purchases was the deerstalker hat,” said Yaacov. “It was made famous in 1891 when Sidney Paget illustrated one of Conan Doyle’s Sherlock Holmes stories, putting a deerstalker hat on the detective. Today, I sell about 50 deerstalker hats a year in Israel.”

When COVID-19 forced him to keep his shop closed for weeks and months at a time, Yaacov took his store online. He created sherlockshats.com, which features a 3-D tour of his hat-filled store, as well as hundreds of hats from which to choose.

“I write two kinds of blogs for the website,” he said. “One is a story-type blog called The Adventures of the Mad Hatter. The blog tells the story of some of the strange and unusual things that happen in my hat store. The other blog gives a bit more practical information about hats and how to wear them. I’m writing one now on how to fit the hard-to-fit head.”