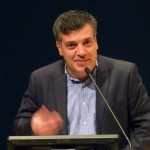 Sayed Kashua spoke in Winnipeg as part of the University of Winnipeg’s annual Middle East Week. (photo by Rebeca Kuropatwa)

On Feb. 25, as part of the University of Winnipeg’s annual Middle East Week, about 75 people came out to hear what guest speaker Sayed Kashua had to say on the topic The Arabs in Israel: The Inaudible Cry for Full Citizenship.

Born and raised in Tira, Israel, Kashua is an author and journalist. His three novels – Dancing Arabs, Let it Be Morning and Second Person Singular – have been translated into English, with the stories of his first and third novels being combined to become the film Dancing Arabs. Among other things, he is the creator of the Israeli TV show Arab Labor and the subject of the documentary Forever Scared. His 2013 talk in Vancouver sold out.

At the recent Winnipeg event, Global College executive director Dean Peachey and U of W president Dr. Annette Trimbee welcomed Kashua and the audience to the U of W’s Eckhardt-Gramatté Hall.

Kashua moved with his family to Champaign, Ill., a year and a half ago, finding the “noise” in Israel too distracting.

“When we arrived,” he said, “I taught my kids two things: that people here stand in line and that, if you’re asked where you’re from, just say you’re from Jerusalem … and, according to their response, you’ll decide if it’s east or west.”

When Kashua enrolled his kids at school, he found himself stumped by the forms when he came to the question about race, as Arab was not listed.

“I almost checked off ‘other,’ but I was so worried about losing my visa within three days of landing in the States…. I almost signed my kids as Asians, because I can easily prove that Jerusalem is part of Asia…. I didn’t know what to do. I raised my hand and the nice lady asked how she could help. I said I don’t know what my race is. She asked where I was from. I said Jerusalem. So, she said that I’m from the Middle East … so, I’m ‘white.’ That was the point that I knew I loved Champaign.”

For the first time, Kashua was part of the majority.

It was not until he went to the United States that he was asked about Islamophobia. As a secular Muslim, he had to think about the question, and he decided that the more important aspect to him was his nationality.

However, he recently found out at a parent-teacher meeting that his son was going to prayer. Kashua asked the teacher which religion or faith his son was following.

“The teacher said, ‘What do you mean? [He prays] with the Muslims. You are Muslims?’

“I said, ‘Yes, but I had no idea that my son prays.’ It was shocking for us, how the majority defines you, and how my son who is only 10 already realized he belongs to the group of Muslim kids in their school.”

Kashua then spoke of his greatest influence in becoming a writer – his illiterate grandmother who had lost her husband in the Israeli War of Independence.

“She was illiterate, but she was intelligent and sharp,” said Kashua. “She always told me bedtime stories. Maybe writing for me is just [a way] to keep telling myself bedtime stories. She told me wonderful stories, sometimes fairy tales. A huge part of her stories were about the war.”

According to Kashua, most Palestinians who became citizens of Israel after the war – farmers and those who remained in their villages – were or are illiterate.

“In 1948, most Palestinian villages, especially on the shore, were demolished,” he said. His grandmother had stories about her husband, “who was shot in the war, killed in 1948.” Kashua’s father was born in 1947, “so he was less than 1-year-old when his father was killed.

“She told stories about how she was trying to protect her son, sometimes running in the wheat fields, trying to cover him, when the bullets were whistling around her … escaping to the mountains,” said Kashua. These were, he added, “my childhood stories, and, to me, it’s history. It was never part of our education system, we belong to the Israeli education system. We are Palestinians, but also Israelis … became Israelis after the war of 1948. The war is never mentioned in our history books.”

It was not until after the war that Kashua’s grandmother learned that she no longer had land. To his family, he said, that was a bigger loss than losing their house.

“My grandmother, who used to have a lot of land, became a worker, picking fruit for Jewish bosses, sometimes in her own private land, picking fruit in fields she planted herself,” said Kashua. “That’s a very strong feeling I received as a boy, about being a refugee.”

When Tira became part of Israel people received Israeli citizenship. They lived under a military regime he said, until 1966, just a few months before what he described as “the occupation of the West Bank,” noting that “the military regime meant you couldn’t leave your village without permission from the military officer in charge.

“My father was telling us [that] only on Israeli Independence Day, you didn’t need a permit. Kids would jump onto trucks to go to another town, just to see, for a chance to go out. Of course, they were forced in their schools to celebrate Independence Day with Israeli flags.”

Even today, according to Kashua, conditions are different in east Jerusalem than in west Jerusalem. He said that Palestinian Israelis do not have equal rights, and are discriminated against in all aspects of life.

“Maybe, at the beginning, people wanted to defend our identity, language, culture and tradition, but that’s no longer the case. We are trying to escape the ghetto, but there are so many laws that forbid us to do so. That’s the situation, you are completely segregated.”

Kashua described Israel as an “ethnocracy.”

“It’s democratic only if you’re Jewish,” he said. “If democracy is judged by how it treats minorities, Israeli democracy is facing a very big problem with the Arab minority…. We are still considered a national threat, a demographic problem.

“If you look at the history, you will see that, since 1948 until now, it was very rare that Arab citizens of Israel were activist against or being a real threat to the security of Israel. All Israelis know that reality and they know we are completely discriminated against when it comes to all aspects you can think of – land, the ability to move from your village. The sad thing is, sometimes the slave feels like he needs the master more than the master needs the slave. You have no idea how strong of a feeling it is when you don’t have even the ability to dream.”

Kashua was fortunate to find a Jew willing to sell him an apartment in west Jerusalem. They were the only Arab family living there and this was one of the reasons they moved to the United States.

Kashua believes that Palestinians want to be citizens of Israel and that they do not want to destroy the state, but they do want equal rights, as well as acknowledgement for the suffering they feel they have endured since 1948. This is something Kashua does not see as possible with the current leadership in Israel.