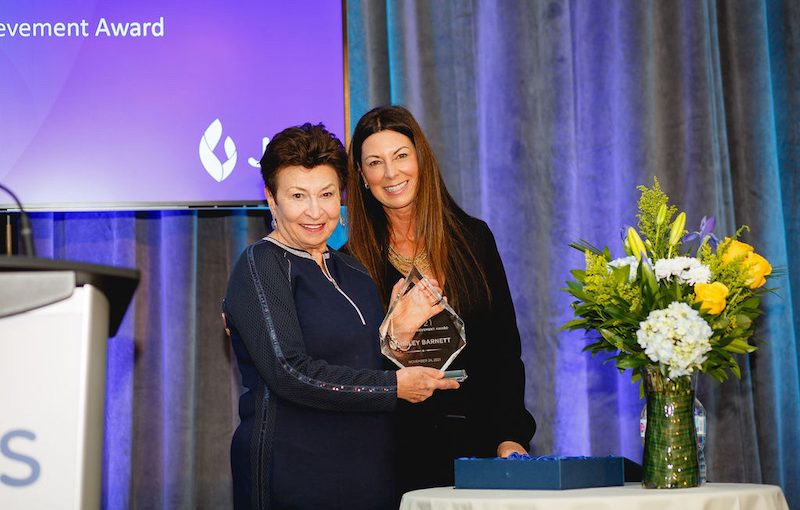 Shirley Barnett holds the JFS Lifetime Achievement Award, which was presented to her by Jody Dales on behalf of the agency. (photo from JFS)

On Nov. 24, Jewish Family Services Vancouver celebrated its 85th anniversary with a mini party at the 110-year-old Heritage Hall on Main Street. It was a fitting occasion and venue to launch the organization’s inaugural Lifetime Achievement Award.

Tanja Demajo, chief executive officer of JFS Vancouver, welcomed guests to the evening’s celebration, which had the theme “SustainAbility: The Power of Local.” Starting off the proceedings was Rabbi Adam Stein of Congregation Beth Israel, who explained some of Judaism’s blessings for the miracles of nature before making a blessing for good health and “for now, a bit less rain,” in recognition of the damage and displacement caused by flooding in the province.

JFS board member Jody Dales then presented the JFS Lifetime Achievement Award, which was established this year, in celebration of the agency’s 85th anniversary. “Its purpose is to honour someone who has demonstrated exceptional leadership over a significant period of time, who has displayed wisdom and depth of service and who has made a [major] difference to the course of our agency,” she said. “The first person who came to mind for this award was Shirley Barnett.”

When Barnett joined the board as president and executive director almost 40 years ago, said Dales, the agency was going through a rough time. Serving on the board – on a volunteer basis – for nearly 15 years, Barnett introduced several new programs, expanded the services available, and increased the fundraising capacity.

In a video about the award, Barnett notes that she joined the board in 1973. She says she was in awe of the older women who were her fellow board members. “We started a newsletter, we started a group of volunteers, we started an employment program, we started an organization that lent people money,” she says, referring to the reestablishment of the Hebrew Free Loan Association.

JFS board chair Bill Kaplan was unable to join the anniversary celebration, but sent remarks that were read by Dales. “JFS is all about service to community and so is Shirley,” he said. “It’s perfectly fitting that she’s honoured on this special birthday because she epitomizes what we strive to be – a difference-maker, uplifting lives in our community.”

Dales spoke of some of the ways in which Barnett has made her a better person, including being a better daughter, community activist and philanthropist, all through Barnett’s example. “I accessorize better because of Shirley,” Dales added, laughing.

On a more serious note, she shared how, on a recent community organization trip to Cuba, while they were having a relaxing moment, Barnett said to Dales, “You know what I’ve learned? I need to laugh more.”

“And that was so incredibly profound, and honest, and vulnerable, and I admire her for being the kind of woman who says things like that very openly,” said Dales.

In accepting the award, Barnett said her connection to JFS began before she was born – her mother’s sister, Sonja (Sara) Victor, was a founder, in 1936, of the organization, then known as the Jewish Family Welfare Bureau of Vancouver.

Barnett shared some of the challenges the Jewish Family Services Agency was facing when she joined them. “We finally hired a remarkable executive director,” she said, referring to Barry Corrin, who was ED for 12 years – “and those years were formative.”

Many of the concerns remain the same today, said Barnett. Food banks and food security, poverty, housing – “these are exactly the same issues we dealt with years ago,” she said.

Keynote speaker Karen Malone, founder of LitPark, a Toronto organization that helps businesses with environmental, social and governance (ESG) solutions, spoke of JFS in the context of sustainability. She lauded the agency for how it has managed to meet the needs of the community for 85 years and counting, operating in an evidently sustainable manner.

Malone framed each of her three main takeaways around the history of JFS, using it as an example of a group that operates according to sound ESG principles, and one that has shown that “small, consistent, local adaptations can add up to significant progress in creating a sustainable future, and they’ve been doing it for 85 years.” From its beginnings, JFS has, among other things, been helping new immigrants integrate into life here, offered employment-finding services and provided programs for seniors who would otherwise be socially isolated. During the pandemic, JFS expanded the food bank into food delivery,  and increased counseling services and housing supports, said Malone.

“It may not have been thought of in 1936 or in the ’60s or ’70s, but this just-in-time response to a change in community has a name: locally led adaptation … [which] recognizes that local communities are best placed to understand their own needs and to develop the most effective solutions.”

She said, “It is inarguable that the challenges faced by the world today are a complicated, interconnected web. Building a sustainable society relies on adopting a holistic approach that embraces this interconnectedness rather than trying to compartmentalize it. JFS has shown they understand this assignment. This is an organization that is deeply connected to its community, that understands that ‘ability’ is the operative part of sustainability – the ability to see the emergent needs of the population it serves and to welcome new populations when they need help, too; the ability to provide just-in-time services in moments of crisis; the ability to learn from a rich history and apply these lessons in new ways to meet modern challenges.”