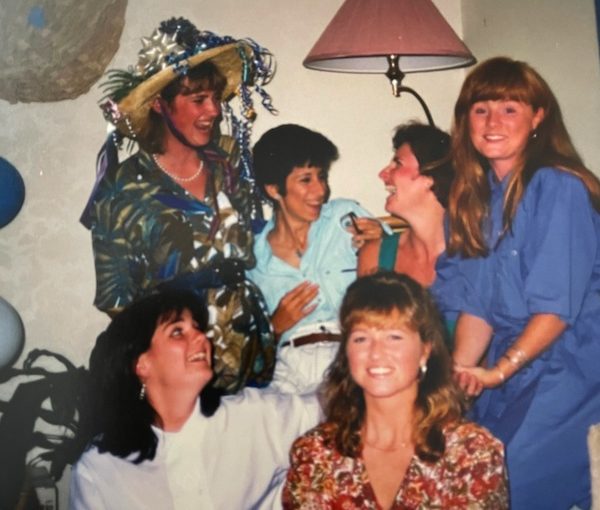 Six members of the 35th Street Gang, with the author second from the left in the back row. (photo from Cassandra Freeman)

Sheena and I don’t recall why we were trying to measure the house with a ball of string. We just remember me holding one end of the string, throwing the rest down from my bedroom, and her running all around the house with the rest of it till she got back to me. We were 8 years old and we were part of what we proudly called the 35th Street Gang.

At a recent reunion, 43 years later, seven of us mischievous women decided that playing was a powerful thing. It was about athletic activity, creativity, community building, trust – and simply some of the funnest times we’ve had.

Fairly early in our lives, “we seven” decided we owned the block. That’s why we called ourselves the 35th Street Gang. For some of us, a rite of initiation to the gang was to climb with hands and bare feet up to the very top of the pole and touch the signs that read 35th and Maple, then slide right back down again.

Kick the can was one of our favourite games. It was a combination of tag and hide-and-go-seek. I remember shivering with anticipation in a neighbour’s garage, hiding from the girl who was “it.” Of course, she found me before the others, and we raced down the short hill and around the corner, each of us trying to be the one who would kick the can first. I’m betting that we ran faster than we ever did in phys ed class. (Some adults still play this game I discovered, and you can search for them on meetup.com.)

Roller skates were all the rage in the early 1970s. They attached to the bottom of your sneakers with a metal key. I can still feel the vibration from the wheels going all the way through my body from the contact with the cement below. And just skating in the middle of the road wasn’t good enough for us. One of us, Louise, created a song we all sang and did the motions to while skating. It went like this: “Butterflies fly, and so do I, and I like it, so I don’t sit, I fly … so do I.”

The most daring kind of play we did was tobogganing. Daring because we slid down a severely slanted sidewalk covered with snow and ice. The year I was 8, winter was particularly cold. That did not deter us and neither did the teenage boys who threw ice balls at us on the way down. We were determined to have a good time.

We had a regular toboggan that fit three of us, a red slippery carpet, and a small round “flying saucer” one that would go round in circles as you went down. The bump we all made in the middle of the run was the most fun. We would fly off that thing so high it took a few seconds to come back down to earth again.

One time, I was sitting in the middle of the flying saucer and flew off that bump and started spinning in circles. I still remember that moment when I realized – too late – that I was going to hit the huge chestnut tree at the bottom of the run. And so I did. Thwack! My back hit that tree so hard it took all the breath out of me. Realizing a few seconds later that I was all in one piece, I got up and marched back up the hill and slid all the way down again on someone else’s toboggan.

We did all of these things running in and out of my parents’ house. As a result, all of my friends still know about all the Jewish holidays and what a kosher kitchen is. They would even march in on Passover with non-kosher-for-Passover popsicles to torment my poor older sister who was trying to keep the holiday. Today, they remember my parents, Joyce and Bernie, as being their second parents growing up. One of us, Madeleine, even says that she became a war crimes prosecutor because she learned about the Holocaust from spending so much time in our house. (See jewishindependent.ca/working-for-human-rights.)

When John Fraser became a member of Parliament, we used his election signs to build a huge maze in the Frasers’ front yard. We crawled around until our knees hurt. We had such a great time until we learned that he and his wife would be leaving for Ottawa with their three daughters. We said our sad goodbyes and waited for the time we would see them again.

Looking back, I am thankful I was involved in an old-fashioned kind of play that created lifelong friendships. Now, at our reunions, we become kids again and laugh our heads off for hours.

Cassandra Freeman is a freelance writer and teaches improv games for parties and performance.