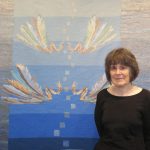 Barbara Heller’s exhibit, Divine Sparks, is at the Zack Gallery until Oct. 8. (photo by Olga Livshin)

Barbara Heller’s new solo show at the Zack Gallery, Divine Sparks, could be divided into three distinct themes, each one representative of a world culture: the Sephirot, the Mudras and the Future Reliquaries. Each of the three resonates with one of three religions, Judaism, Hinduism and Christianity, respectively, but Heller, a master weaver, sees divine sparks everywhere. Her tapestries, big and small, invite gallery guests to contemplate what unites us, no matter our ethnicity or religious affiliation.

Symbolism infuses Heller’s images, starting with the centrepiece of the show, “Tzimtzum,” or “Transcendence.” The large tapestry is a stylized ladder. The midnight blue rungs at the bottom coalesce into a dead bird, but the higher your eyes travel, the lighter the colours become. Two pairs of wings punctuate the climb of colours from dark indigo to white radiance.

“The ladder has many interpretations,” Heller told the Independent. “It can be a metaphor for our life, a liminal space between birth and death…. For me, the rungs are stepping stones on the path of spiritual attainment, of transcendence.”

Heller has shown this tapestry at several exhibitions already, to great acclaim. Recently, it won the American Tapestry Alliance Award.

“Originally, I wanted to display this tapestry with real feathers piled along the bottom,” the artist said about “Tzimtzum.” “I have amassed many beautiful feathers, and friends kept bringing me more, but I discovered it was almost impossible to send real feathers anywhere. I displayed the tapestry in Poland a couple years ago, and they told me that real feathers have to be quarantined for weeks before being allowed into the country. And they can’t be from endangered species. I wasn’t sure about that.”

Since the plan involving the real feathers fell through, Heller made a series of small tapestries of her feather collection, Sephirot, specifically for the Zack show.

“I already had lots of yarn died blue for the ‘Tzimtzum,’” she said. She called the series Sephirot after the kabbalah’s spiritual qualities of understanding, wisdom, love and judgment, among others.

“Some of the feathers are almost photographic,” she said. “In the others, I played with colours and sparkles.”

The second series in the show, Mudras, obtained its name from the hand gestures prevalent in Hinduism, Asian dancing, yoga and meditation.

“Typically, mudras are used as a way to direct energy flow in the body,” Heller said. “According to yoga, different areas of the hand stimulate specific areas of the brain. By applying light finger pressure to these areas of the hand, you can ‘activate’ the corresponding region of the brain. In addition, hand mudras also symbolize various feelings and emotions.”

Heller’s Mudras is a series of small, uniform-sized round images of various hand gestures. The hands are woven of golden yarn and appliquéd to dark-green fabric with a vague “computer motherboard” pattern. Parts of real electronics – wires, chips, connectors – are incorporated into the design of every gesture, as if to emphasize the similarities between computer circuits and the neuron circuitry in our brains.

“I collect old electronics and take them apart, and use them in my weaving,” said Heller. “This series was fun to make.”

The other series, Future Reliquaries, is an older one. Also depicting hands embedded with parts of electronic devices, it reflects humanity’s developing love affair with technology.

Several tapestries of the series are rather large. In each one, a human hand in golden yarn stands out from the background of an ancient traditional pattern. “Different tapestries sport different patterns: from Persia, Indonesia, Turkey, Navajo,” Heller said.

Like in the Mudras series, the interlaced computer piece are symbolic of our interconnection with machines.

Heller wrote: “This series deals with three apparently separate but, in my mind, connected histories: weaving, computing and religion. Weaving is a binary system of up/down, just as computing is a binary system of on/off…. Religion is not only a store of faith; it is a store of history and social values…. Today, we are creating a new religion. We are worshipping the technology.”

Heller’s tapestries contemplate the future status of today’s electronic remnants in the context of ancient fabrics. “As holy relics were housed in reliquaries, often made of gold and gems, I’m trying to populate my tapestries with the future relics – the computer chips and wires.”

Beside the large hands, there is also a selection of tiny ones, where each miniscule woven hand is linked to topics such as keys or clocks, science or beauty, birth or death.

Heller’s exhibit is part of larger happenings in Vancouver this month – a symposium of the Textile Society of America. The symposium takes place Sept. 19-23, and many galleries around the city besides the Zack are displaying textile or weaving exhibitions to coincide with it.

As a well-known local artist, Heller has been one of the event organizers from the beginning. “We have a wealth of local textile artists, and about 400 people are coming to the symposium from all over the world,” she said.

The planning for the symposium began three years ago. “We made sure that the hotel reservations were available on the dates that didn’t include Yom Kippur,” she said. “Unfortunately, a year ago, the hotel informed us that they had to change our reservation dates.”

So, now, the first day of the symposium falls on Yom Kippur, as other reservations were not available, and the society has posted an apology on its website.

The Zack Gallery offers a bus tour of three textile exhibitions in the city on Sept. 20. To learn more about the tour and to register, visit jccgv.com/art-and-culture/gallery. For more about Heller, visit barbaraheller.ca.

Divine Sparks opened on Sept. 6 and continues until Oct. 8.