Jews are the quintessential successful minority group by any economic measure. They are disproportionately represented in the top rankings in business, finance, the arts, scientific research, architecture, medicine and law.

Likewise, Mormons and new immigrants to the United States from China, Cuba, India, Lebanon, Nigeria and Iran make the A-list in several sectors of the economy. Meanwhile, black Americans and other groups are stuck in poverty with high unemployment and poor education.

Those are bold statements that many will dismiss as thoughtless stereotypes. But are the generalizations baseless?

The Triple Package: How Three Unlikely Traits Explain the Rise and Fall of Cultural Groups in America (Penguin Press, 2014) is an exploration into the murky world of these sweeping statements. Amy Chua, the “tiger mom” who gained notoriety for her harsh approach to child-rearing, teams up with her accomplished husband Jed Rubenfeld to investigate some of the reasons why some groups rise to the top of their fields, become wealthy and win awards while others seem to be stuck in a rut. 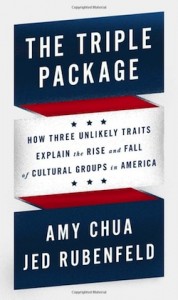 They look for similarities in the lives of numerous celebrities, corporate leaders and ordinary folks, both those who have done well and those who have failed. They dissect statistics from census tracks that identify highest income and medium household net worth for different ages within several racial, cultural and religious groups. They count CEOs and CFOs, the percentage of students at Harvard and other Ivy League schools, and the winners of Nobel Prizes, as well as cultural awards such as Pulitzers and Academy Awards. They slice and dice the numbers in numerous ways and come out with specific cultural traits – a set of values and beliefs, habits and practices – that they conclude are similar among all the overachieving groups.

• Disproportionately successful groups have a deeply internalized belief in the specialness or superiority of their group, rooted in theology, history or a social hierarchy from their homeland.

• Members of the group have a feeling of insecurity and anxiety about losing whatever they have. They feel what they do is never good enough.

• Those that succeed emphasize discipline and controlling impulses. They stand up to temptation and persevere despite difficulties.

The authors conclude that people grappling with a superiority complex and deep insecurities are often consumed with resentments that push them to overachieve. The chip-on-the-shoulder attitude feeds their ambition and creates an “I’ll show them” mentality. Impulse control mixed with strong ambition yields a toughness and resilience. Members of the group who succeed found virtue in enduring hardships, deferring gratification and standing up to adversity.

There is some truth in what they write. The biographies of prominent Jewish figures often include anecdotes reflecting those traits. Although Jews are “Chosen People,” they are haunted, at least in the world of Philip Roth and Woody Allen, by insecurities stemming from unrelenting parental pressure and social scorn, real and imagined. Impulse control has been foundational to Judaism religion, with its 613 injunctions, and its countless prescriptions for a traditional Jewish way of life. It is those forces that Chua and Rubenfeld say converge to produce success.

Jewish overachievers are not the only ones. Chua and Rubenfeld find parallels with the traits of the disproportionate number of Mormons who are top executives of Fortune 500 companies, with Asian American students with the highest grades (but reportedly the lowest self-esteem of any racial group), and Cubans in Miami who have become millionaires and hold a disproportionate number of managerial and professional positions in the city, and dominate local politics. Other immigrant groups under similar pressures also do well.

But such sweeping statements set off alarms. Caustic reviews since the book was released earlier this year dismissed their conclusions as racist, faulty social science and, some may say even worse, dull prose. Reviewers attacked Chua and Rubenfeld, two Yale University law professors, for sloppy thinking and loose use of language.

Chua and Rubenfeld are accustomed to public attention, although usually of a different sort. Chua was on Time magazine’s list of the 100 most influential people in the world after the release of her book Battle Hymn of the Tiger Mother in 2011. Rubenfeld has written two international bestselling novels and two books on constitutional law.

They challenge those who assume equality is always beneficial. They suggest that promoting self-esteem, instant gratification and excessive freedom in parenting may be counter-productive.

Clearly frustrated by the response to their new book, Chua and Rubenfeld have said their work has been misunderstood and misrepresented. They believe they have been aggressively attacked because their conclusions run counter to contemporary political correctness. They challenge those who assume equality is always beneficial. They suggest that promoting self-esteem, instant gratification and excessive freedom in parenting may be counter-productive.

They attribute the uproar over the book also to an aversion to talk about opinions about various cultural, ethnic and religious groups doing significantly better than others, views that are often expressed privately but not in a public forum.

They got that right. It’s a minefield filled with explosive emotions and ugly name-calling. However, they are right in insisting that the overheated rhetoric contributes nothing to an understanding of the subject. We should not avoid discussion of hot issues, especially those that have given rise to some of the worst atrocities in the world. Chua and Rubenfeld raise matters that should engage society in dispassionate debate.

So let’s turn the spotlight on their generalizations about cultural traits to see whether they stand up.

Chua and Rubenfeld try to inoculate their conclusions from criticism with 78 pages of notes and listing the names of 50 research assistants who worked with them. They claim statements about economic performance and cultural attitudes are backed up by empirical, historical or sociological evidence. “But when there are differences between groups, we will come out and say so,” they write.

They look at characteristics of those struggling in poverty and at a variety of explanations for their situation, such as IQ levels. They conclude that the disparities between rich and poor cannot be explained by these alternatives.

They also note the transitory nature of the accomplishments achieved through the sense of superiority, insecurities and hard work. Success wipes out insecurity and eases assimilation; equality undermines personal ambition. They conclude that traits that helped disproportionately successful groups rarely survive beyond the first two generations.

They downplay the impact of politics, social institutions and education. Personal responsibility plays virtually no role in their theories. Factors that have nothing to do with religion, culture or race, such as the lack of opportunity, discrimination and the devastating impact of economic forces, are minimized. Chua and Rubenfeld gloss over examples that do not fit their theories.

Despite their extensive references to research, the book reads as if Chua and Rubenfeld started with conclusions and then went out to find evidence to back up what they wanted to say. Focusing on cultural traits has blinded them to other influences. They downplay the impact of politics, social institutions and education. Personal responsibility plays virtually no role in their theories. Factors that have nothing to do with religion, culture or race, such as the lack of opportunity, discrimination and the devastating impact of economic forces, are minimized. Chua and Rubenfeld gloss over examples that do not fit their theories. Are they cherry-picking results and leaving out conflicting evidence? An answer to that question will be left to the experts in the field.

Anticipating probably the most controversial attack, the charge of racism, the authors write they are identifying psychological attitudes, not characteristics from birth. They acknowledge that significant differences exist within every racial, cultural and religious group. Even the subgroups they identify were not monolithic. But, they say, that did not make the culture traits less real or powerful.

They also anticipate critics who say the traits they celebrate often do not lead to happiness. They acknowledge that the attributes of success come with their own distinctive pathology that misshaped lives. Deeply insecure people were often neurotic and a sense of superiority led to arrogance and easily morphed into racism. They concede that the “triple package” might not be a recipe for happiness. Indeed, the rewards of the triple package were mostly financial. However, they posit that material success can lay the foundation for a happier life.

So, what are we left with after so many qualifications? As pop sociology, the book provides numerous provocative sparks for conversation around the Shabbat table. They identify some traits of some people who have achieved much. But many would insist their glib generalizations are just plain wrong. At times, they seem to give the strongest arguments against their own conclusions. And, even if you accept what they say, it is doubtful that many parents would want their children to follow the direction that Chua and Rubenfeld have set out.

Media consultant Robert Matas, a former Globe and Mail journalist, still reads books. The Triple Package: How Three Unlikely Traits Explain the Rise and Fall of Cultural Groups in America is available at the Isaac Waldman Jewish Public Library. To reserve this book, or any other, call 604-257-5181 or email [email protected]. To view the catalogue, visit jccgv.com and click on Isaac Waldman Library.