Shirley Graetz’s She Wrote on Clay (Hadley Rille Books, 2013) is so intriguing, so mesmerizing, so unique, so well-written, I could not put it down! 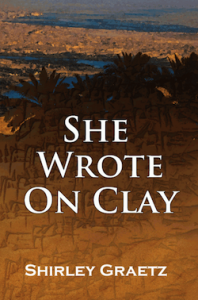 Graetz was born in Dusseldorf, Germany. She came to study at the Hebrew University of Jerusalem and never left Israel. Her master’s degree and her doctorate are in ancient Near Eastern studies, and she is a licensed tour guide and a teacher, married and mother of three young children.

She explains that, while conducting her PhD research at Ben-Gurion University in 2011, she was working on letters written by women who were naditu, monastic women who lived around 1800 BCE, about the time of Abraham, in Mesopotamia (ancient Iraq).

She had never written fiction before but, she says, “The women started to talk to me in my head. I had just given birth to my third child (the other two were 2 and 4), it was the second year of my PhD, but I sat down and wrote for three days. It was as if the story wrote itself.”

The texts were originally in cuneiform on clay tablets, in Akkadian, an ancient language. Some of these women were scribes. They lived in the equivalent of a walled compound called a gagu, but each woman had her own house or room. They all came from wealthy families, and there were different gagus in different cities. By becoming a naditu, each woman foreswore marriage and children, but her family provided her with food and clothing. However, the women had to be successful in business in order to remain financially independent.

The most prominent gagu was in Sippar, Meospotamia, a city on the banks of the Euphrates River, from which we have the most texts.

The novel revolves around 16-year-old Iltani, whose goal in life is to become a scribe. The best way to achieve this is to become a naditu and go to a gagu, which she will do in three months; her aunt and a childhood friend also live there. Her father has paid a naditu there to teach her to be a scribe. Once she enters, she will not visit her family for two years.

When she enters, there is a ceremony as she leaves her family and is welcomed by the priests, the making of temple offerings and her initiation. Her life then begins, and this forms the bulk of the book – focusing on her day-to-day life, the process of learning to be a scribe, her relationships with her aunt and friend, as well as conflicts within the gagu and her other relationships, until she is 25, already nine years in the gagu.

The surprising turns add much to the enjoyment of this read, and the meticulous details described about the home life, the clothes, the food, the customs in Sippar, are also part of the fascination of this story about what I would call “feminist women of 4,000 years ago.”