When I saw the table of contents of The Poems of H. Leivick and Others: Yiddish Poetry in Translation by Leon H. Gildin (Finishing Line Press), a lovely little book of translated Yiddish poems by Leivick and other noted poets, two images came immediately to mind. One was a scene with Leivick, a slight figure with a beautiful etched face and a halo of white hair, sitting alone on a circular stone ledge in front of the Hebrew University library, in Jerusalem, seemingly lost in thought. The other, and this goes back decades, is a gathering of Yiddish poets, including almost all the ones collected in this book, in a meeting hall in New York. What a thrill it was for a college boy to be at such a meeting and seeing face-to-face the famous poets he had known before only by name. 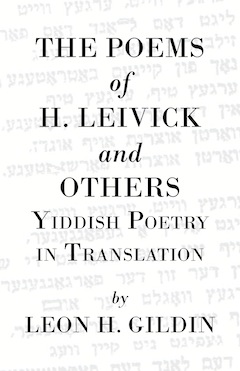 The poems of Leivick (1886-1962) range in subject matter: a poem about a very small poem “no longer than an epitaph”; the recollection of a birch rod beating given by his father; a prisoner in a cell at night “swallowing as if it were wine the moon’s bright light”; a man looking for work without success. Leivick was a paperhanger when he came to the United States. He was also a noted playwright; his most famous is The Golem, originally produced by Habima Theatre when it was still in Moscow, and later translated into other languages.

Here, too, admirably rendered into English by Gildin, are the voices of other famous American Yiddish poets – all born in Eastern Europe – singing songs of longing, love and the Sabbath. About half the poems are by Leivick: the rest are by luminaries like Chaim Grade, Yakov Glatstein, Avraham Reisen, Itzik Manger, A. Leyeles, Mani Leib and Avraham Sutzkever. Most of the poems here have a modernist lilt regarding imagery and tone, yet all have traditional rhymes.

My only caveat with this fine ingathering of poems is that too much space is devoted to a relatively minor but good poet, Anna Margolin. Where Grade has only one, why six for Margolin? Additional poems by the other poets would have been welcome.

My favorite poems here are those that have a Jewish core. Hence, Grade’s loving poem “The Sabbath,” recalling his war- and postwar-years wanderings in Russia and Europe, resonates, as does Ephraim Auerbach’s prayer-poem “God of Abraham,” which begins with the opening lines of Havdalah – the prayer for the departing of the Sabbath – and takes wing from there.

In his short introduction, Gildin accents the secular aspects of Yiddish poetry but, by so doing, he puts an artificial divide between religiosity and secularism. He says that, while Yiddish was the street language of the Orthodox, the secular Yiddish created a culture. But Gildin neglects to note that Yiddish was used far beyond the street for Orthodox Jews. Religious Jews also used Yiddish in shul, in studying and in translating Chumash and Talmud, and in creating commentaries and translations of the siddur and the machzor, the daily and the holiday prayer books, respectively. Women created their own prayers in Yiddish, which were collected into separate volumes. This same “street language” was used by the secular poet Yehoash in creating his masterpiece: his magnificent translation of the entire Bible into Yiddish.

In Grade’s “The Sabbath” and Auerbach’s “God of Abraham,” the boundaries between piety and secularity are blurred. The distinctions are not as separate as they appear to be. In a classic photo of Yiddish poets sitting at a long dinner table at a wedding, one can see secular poets like Leivick, Grade, Glatstein, Reisen and noted critic Shmuel Niger, all wearing either fedoras or yarmulkes.

Sholom Aleichem was thoroughly secular. He was not observant and did not keep a kosher home. In fact, he spoke Russian, not Yiddish, to his family. Yet, when his son died in Denmark, he went to shul to say Kaddish every day in New York. And, in his will, he asked those who are willing, to say Kaddish for him, too.

Most significantly, the obviously secular translator of this volume, Gildin, along with his brother, founded a university Yiddish department, not in the secular Hebrew University, Haifa University or Tel Aviv University, but at Bar-Ilan University, the only religious-sponsored university in Israel.

For those who know Yiddish poetry, The Poems of H. Leivick and Others revisits old friends; for newcomers, it is a cogent introduction.