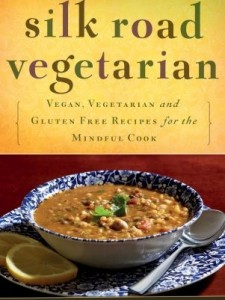 Silk Road Vegetarian: Vegan, Vegetarian and Gluten Free Recipes from the Mindful Cook by Dahlia Abraham-Klein (Tuttle Publishing Co., 2014) contains 121 recipes in eight chapters, several of which would be ideal for Shavuot.

Although Abraham-Klein grew up in New York, her parents trace their ancestry to the Babylonian Exile (now Iraq) and Persian conquest (now Iran) of sixth century BCE. Her ancestors traversed Persia, Afghanistan and Bukhara (capital of Uzbekistan), speaking Farsi and Judeo-Persian. In the early part of the 19th century, they settled in Afghanistan, in the middle of the Silk Road, which was an extensive, interconnected network of trade routes across the Asian continent.

The author’s great-grandfather owned a vineyard in Uzbekistan; her grandmother moved to the United States in the 1950s and grew her own grapes to make wine. The author’s mother and siblings grew up in Kabul, then moved with the family to Israel in 1949. The author’s father, who had grown up in Kabul, lived in India and visited Israel, where he met and married her mother in 1952; they lived in India until 1956.

Abraham-Klein’s family were merchants, absorbing the culture, languages, tastes and cuisines of all the places in which they lived. However, she grew up in New York and, as a teen, became unable to eat wheat, dairy and sugar. She has a master’s degree in education and a degree in naturopathy.

Silk Road Vegetarian contains recipes for bases, condiments and dips such as hummus, tomato paste, za’atar and mango chutney; appetizers including vegan chopped liver, stuffed grape leaves and Italian zucchini fritters; soups like Persian bean and noodle, and pumpkin. Among the salads are minted beet, and Middle Eastern lemon potato. Afghan squash goulash and Bengali potato and zucchini curry are among the main dishes; Bukharan green-herbed and Greek-inspired spanakorizo are among the rice dishes, and sides include sesame noodles and shawarma-spiced potato wedges. The desserts chapter has, for instance, orange blossom date balls and orange zest almond cookies.

The book is enhanced by 174 color photographs. Among these are ones that show how to prepare slivered orange peel, fold stuffed cabbage and remove coconut meat. Because Abraham-Klein has no formal culinary education, she has produced a cookbook that is easy to follow, with interesting cultural and historical notes about each recipe, bold-faced ingredients and numbered instructions. There is also an essay on the spice pantry; others on tofu and legumes; an article on grains; and a feature on food preservation.

COCONUT MILK
Can be used as a substitute base for curries, in lieu of cream, and for dairy in desserts.

Bring the water to a boil in a large saucepan. Stir in the coconut and then remove from the heat. Cover and let cool.

Purée with an immersion blender. Line a sieve with cheesecloth and set it over a bowl. Pour the purée into the sieve and squeeze the cloth to extract the liquid. Remove the cheesecloth and use the coconut milk right away or store it in the refrigerator for up to two days (shake before using). Makes two cups.

Heat the oil in a large skillet and sauté onions for 15 minutes or until they are soft and beginning to color. Stir in garlic and sauté for one minute or until fragrant.

Steep the saffron in a small bowl with hot water. Let sit until water is tinted.

Add spinach to the skillet and sauté for five minutes or until wilted. Add saffron water and stir to combine. Cool completely. Fold in yogurt, season with salt and pepper. Refrigerate for several hours to allow the flavors to meld. Makes six to eight servings.

Wash and soak the rice according to instructions. Combine rice and coconut milk in an ovenproof casserole dish and set aside for 30 minutes.

Preheat the oven to 150˚F. Add sugar, vanilla, lemon zest and butter to rice mixture and whisk gently to combine. Bake uncovered for 2 to 2.5 hours or until top of pudding is lightly browned.

Allow pudding to cool, then gentle peel off skin at the surface and discard. Chill in refrigerator for about an hour or until pudding thickens. Garnish with strawberries or seasonal berries and serve. Makes four servings.

Sybil Kaplan is a journalist, foreign correspondent, lecturer, food writer and book reviewer who lives in Jerusalem. She also does the restaurant features for janglo.net and leads weekly shuk walks in English in Jerusalem’s market.