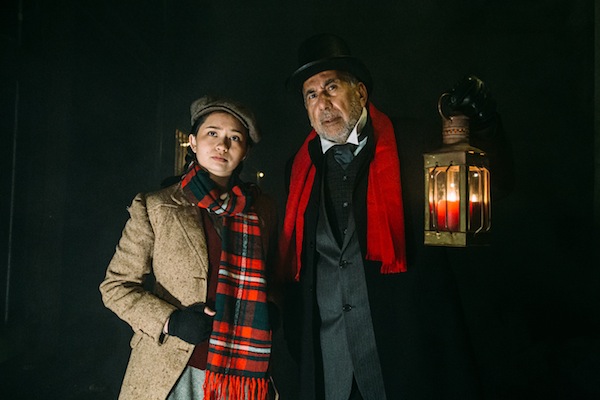 David Adams as Scrooge and Scotia Browner as Tiny Tim in Metro Theatre’s production of A Christmas Carol – The Radio Play. (photo by Nicol Spinola)

Metro Theatre was all set to provide socially distanced, safety-first live performances of A Christmas Carol – The Radio Play this month. But then the provincial restrictions on gatherings came down, and the struggling theatre company had to cancel its in-theatre run. But the production team used what holiday spirit it had to film the show and an online version will be available for viewers to watch from Dec. 21 through Jan. 3.

“We are fortunate to have our talented friends Nico Dicecco and [playwright] Erik Gow film the show and put together a beautiful digital stream of it that is available by donation,” stage manager Kat Palmer told the Independent.

Palmer has had a few shows canceled since the pandemic hit. “Right at the beginning of COVID,” she said, “I was in rehearsals for a sweet little concert Wendy Bross Stuart put together called With a Song in My Heart. I was also looking forward to Hello Dolly! at Theatre Under the Stars. And, most importantly, my company, Raincity Theatre, was gearing up for our production of Cabaret. Obviously, intimate, site-specific theatre is not possible during COVID.”

But A Christmas Carol – The Radio Play was created with COVID-19 protocols in mind. The theatre is a large space, enough for patrons to be distanced from one another. “Even the set was designed to keep actors more than six feet apart at all times,” said Palmer. In rehearsals, every cast member arrived masked and wore their mask until they were in their show spacing, she said. For the stage show, they were ready with two understudies, prepared to go on, lest “any actor wake up with any sort of tickle in their throat.”

But those plans went for naught when, last month, large public gatherings were prohibited and the show, which was to open Dec. 3, was delayed to organize the online version.

“It is no surprise that COVID has deeply impacted our arts community,” said director Chris Adams. “The Metro Theatre is a not-for-profit theatre company that relies on ticket sales to get by. Once a thriving arts hub in a former movie-house, Metro has been hit hard by COVID restrictions that have seriously impacted their revenue. The Metro also rents out their space to schools and dance companies over the quieter spring/summer months but, due to our new reality, that was also impossible this year. The Metro Theatre is at risk of closing its doors.”

Nonetheless, the show is also raising money for the charity Backpack Buddies.

“When Charles Dickens published A Christmas Carol in 1843, charitable giving soared overnight,” said Palmer. “The story has forever changed how we celebrate the holiday season and reminds us of the importance of generosity. It is in this spirit that the Metro always selects a charity to support each year at Christmas.

“Early in the show, we meet Abigail – an orphan who speaks of food insecurity. It is shocking to find parallels between children today and the Dickensian era. British Columbia has one of the highest child poverty rates in Canada, with 20% of children living below the poverty line. The Backpack Buddies program provides backpacks of food to children in need so that they do not go hungry over the weekend.”

A Christmas Carol – The Radio Play is an original work by writer Gow, based on the Charles Dickens novel, of course.

“With Christmas Carol, there is an expected order that ghosts appear. Erik has decided to shake it up,”

said Adams. “There are also some scenes that do not appear in the book that add an extra level of character development.”

The radio play stars David Adams as Ebeneezer Scrooge, who meets all the characters in A Christmas Carol, “from Bob Cratchit to Jacob Marley, but with only six actors creating and voicing over 40 of the beloved characters,” reads the play’s description. Joining David Adams “on stage” will be Roger Monk, Jill Raymond, Chris Ward, Emilia Michalowska and Scotia Browner. The COVID covers were Jim Stewart and Courtney Shields, who is also the assistant director of the production.

“All of our actors have created a character for their narrator in addition to playing every character in the piece,” said Palmer. “For the majority of our performers, they play four or five characters each. For the simplicity of the storytelling, David plays Scrooge but has also created a very unique and distinct character for his narrator. While David has played many Jewish characters, like the Merchant of Venice, Tevye and Fagin, he is not Jewish himself. Although, he has had to learn some Yiddish for roles from time to time.”

As for being a Jewish person working on a Christmas play, Palmer said, “At this time of year, I sometimes feel like Scrooge. I despise the commercialism of the holiday season, how it seems to consume the entire month of December and don’t get me started on cheesy Christmas movies. But, as a Jewish person working on this show, it is easy to see Jewish values on every page of the script. Yes, A Christmas Carol takes place at Christmas but, in many ways, A Christmas Carol is really a story of teshuvah, tzedakah and tikkun olam…. It’s a story that celebrates kindness, charity and human transformation – ideals that all parents hope to instil in their children – ideals that have deep roots in Jewish tradition. Don’t we all want to believe even the worst among us has a core of goodness?”

The filmed version of A Christmas Carol – The Radio Play is available by donation at metrotheatre.com.