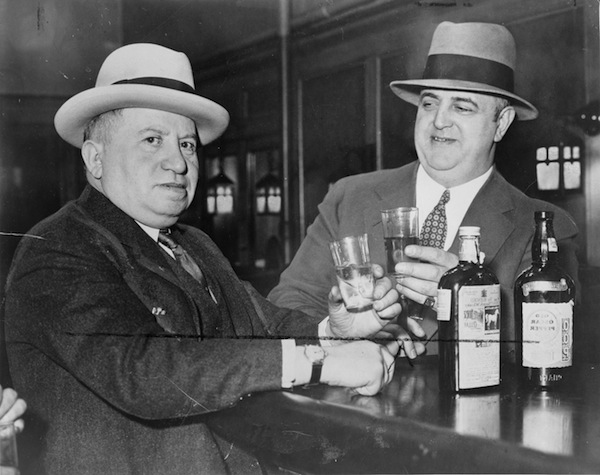 Wine is a large part of Jewish ritual and tradition. And a glass or two of schnapps is not uncommon. Adults often drink something alcoholic on a holiday or happy occasion. So what did people do when there was Prohibition?

In Canada, national Prohibition was from 1918 to 1920 and, in the United States, Prohibition lasted from 1920 to 1933. How did Jews get wine for Shabbat and holidays during these periods? And who clamped down on those who were disobeying the law?

In both the United States and in Canada, Prohibition laws allowed for wine to be sold for religious sacraments. This meant that rabbis and priests could lawfully possess wine. In the United States, both Jews and non-Jews were known to use this special legal passage as a ruse. It led to bootleg priests and rabbis and to the hoarding of wine for bogus religious reasons.

Although Canadian provinces had various earlier restrictions on liquor sale and consumption, the national Canadian Prohibition continued for only a short period of time. And, importantly, it remained legal to manufacture liquor in Canada. Even more significant, Canadian distilleries could likewise legally sell it to the dry United States, where the manufacture, importation, sale and transport of alcohol was then illegal. Thus, Canadians brought alcohol to the United States via Windsor, Ont., where it usually went on to Detroit, Mich. At the time, Samuel Bronfman was the Canadian Jewish owner of Seagram’s. He had Jewish bootleggers floating so much illegal booze into the United States over Lake Erie that this body of water became known as the “Jewish Lake.”

Remarkably, the two most successful U.S. Prohibition agents were Jewish. Izzy Einstein and Moe Smith were two “regular”-looking guys who had absolutely no resemblance to flashy Prohibition agent Elliot Ness, who has been characterized in television series and in movies. Their ability to fool violators with either their ordinary appearance or with their numerous disguises allowed them to make an outstanding number of arrests. In all, they made 4,932 arrests of bartenders, bootleggers and speakeasy owners. They had a 95% conviction rate. They confiscated an estimated five million bottles of alcohol. At the time, this catch was worth about $15 million US.

Neither man had any law enforcement training. Einstein had been a pedlar and a postal worker. Smith had sold cigars. They were not even strongly for temperance, but they were for upholding the law. Initially, Einstein’s job interviewer didn’t want to hire him as an agent because of his lack of training, but Einstein managed to convince the man that he was right for the job because he looked so unremarkable and because he had a “feel” for people.

Having been born in Austria, Einstein spoke a number of languages. He put his language skills to use when the pair disguised themselves. They were known to have used a huge variety of get-ups, including as German pickle packers, Polish counts, Hungarian violinists, Jewish gravediggers, French maitre d’s, Italian fruit vendors, Russian fishermen, Chinese launderers, streetcar conductors, ice deliverers, opera singers, judges, traveling cigar salesmen, Texas cattlemen, movie extras, football players, beauty contest judges, grocers, lawyers, rabbis, college students, plumbers and delegates to the Democratic National Convention. In my estimation, however, the funniest costumes were those of them dressed as a man and woman. One of them sported a thick beard and mustache and a bowler hat, while the other dressed in a heavy fur coat, scarf and jaunty cloche hat.

Einstein claimed that it was key to come into a speakeasy carrying some kind of tool of the trade, so he often carried a string of fish, a pitcher of milk, trombones, a fishing rod or a big pail of pickles. He did not carry a gun, however, and Smith carried one only occasionally.

The greater their chutzpah, the greater the risk to their personal safety. At one Bowery saloon, for instance, Einstein even produced his actual agent’s badge and asked for a pint of whiskey. The bartender thought it was a gag and served him.

So that he had enough evidence to bring charges against the offenders, Einstein devised a special hidden liquor collection system. There were three parts to this system: a rubber bag hidden below his shirt, a rubber tube that was connected to the bag, and a glass funnel sewn into his vest pocket. He sipped the liquor and, without anyone noticing, poured the rest of the drink down the funnel, which then led to the rubber tube.

The pair’s success on the job became a matter of public record. New York newspapers frequently covered their escapades. They became so well known that Einstein’s face was even hung in certain speakeasies. But even that did not tip off drinking customers, as Einstein reportedly once stood below his photo without anyone catching on.

Einstein and Smith had worked as federal Prohibition agents for about six years when they were laid off, perhaps because they inadvertently made other agents “shine” less than they did. They both went on to be a different kind of agent, successfully selling insurance. Some of their clients, it is said, were people they had busted.