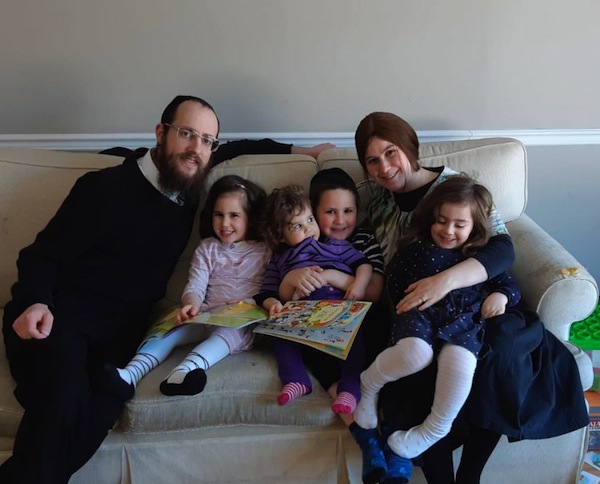 Rabbi Chanan and Tuba Chernitsky and their family before the couple had another baby this past spring. (photo from lubavitch.com)

In the fall of 2019, my husband and I traveled to Newfoundland to take in its beauty and bounty. Both of us had been to “the Rock” for work in previous years but had never had the pleasure of a real holiday in this unique part of Canada. As is always the case with our travels, we were very curious about whether, when and how there may have been Jewish life in this part of the world.

An internet search revealed that Spanish Sephardi traders began arriving in what is now Newfoundland after the English conquest of Eastern Canada in 1761. More than 100 years later, during the 1890s, Ashkenazim – peddlers, tailors, merchants and farmers – escaping Russian and Polish pogroms came to settle there. These peddlers and merchants traveled the island, trading salt fish and textiles. At one time, there was even a small textile industry in St. John’s, which attracted some of these former merchants.

By 1909, the first Hebrew congregation was incorporated. The first free-standing synagogue was built in St. John’s in 1931 but is no longer in use as a synagogue. At its peak, in the early 1970s, about 360 Newfoundlanders self-identified as Jews.

A 2014 article on melbourneblogger.blogspot.com, called “Canada: A History of the Jews in Newfoundland and Labrador,” speaks about various options proposed after the Second World War by the World Zionist Congress as possibilities for the settlement of Jews while the reestablishment of the Jewish homeland, Israel, was developing. Settlement in the outports of Newfoundland was apparently one of those options.

The same article refers to Robin MacGrath’s book Salt Fish and Shmattes: A History of the Jews in Newfoundland and Labrador from 1770, noting there were many missed opportunities to create a more substantial Jewish presence and contribution to the well-being of all Newfoundlanders in the 1930s and 1940s. One example was the refusal of the Newfoundland government – then ruled jointly by British and local commissioners – to address Newfoundland’s critical shortage of doctors by offering the possibility of immigration to German Jewish doctors who were willing to be housed in isolated fishing ports. The British and local Newfoundland government opposed admission of anyone who was not of British stock. One wonders how different and how much more safe outport life might have been had those who lived in these tiny hamlets had access to such medical support.

My research into Jewish connections finally led to the doors of the Chabad rabbi and rebbetzin, Chanan Chernitsky and his wife Tuba, who have made St. John’s their home for the last four years. Rabbi Chernitsky, Argentine by birth, came to St. John’s via Winnipeg, a place to which his family immigrated during one of the many economic declines in Argentina. Tuba Chernitsky is a Winnipegger by birth, raised in a religious family of 11 children. The couple married in Winnipeg, then moved to Montreal, where they spent a handful of years.

Settling in Newfoundland in 2017, with Chabad’s mission to bring Jewish life “to life,” has had its challenges but the Chernitskys – and their five children – have enjoyed a warm welcome from the community at large. Over a Shabbat meal at their home, my husband and I learned that other religious leaders in St. John’s have been generous, as well; for example, offering the rabbi office space and other supports until he can fully establish roots in the community.

The number of Newfoundlanders who self-identify as Jewish is low. The population of Jews living in the province at any one time is partly a function of who metaphorically washes up on its shores – occasionally an academic on loan to Memorial University, a student undertaking a special course of studies, a government official working on a certain project or a businessperson with a unique product or service to develop.

Notwithstanding the relatively small Jewish community, the broader community’s interest in learning about Judaism is lively. During the Chernitskys’ first Chanukah, about 50 people came out to partake in the public candlelighting. The next year, that number trebled – some 150 people came out to get a sense of what Chanukah was all about for their Jewish neighbours.

In 2020, in order to comply with COVID restrictions, Chabad created a drive-in menorah lighting, which generated the largest turnout so far. The Chernitskys gained permission to use a local parking lot, had a radio frequency through which they could keep participants involved in the ceremony and they brought around sufganiyot (jelly doughnuts) to the cars so that families could safely enjoy this part of the celebration.

Both the rabbi and his wife make strong efforts to connect with any Jewish students studying at Memorial University. Before COVID, they also made themselves available to the occasional Jewish visitor who arrived with one of the several cruise lines that make a stop in St. John’s, and they plan to resume the practice as soon as the cruise ships once more operate.

The Chernitskys’ intention is to home school their five children, with Tuba as the teacher. In 2019, the couple started a small Hebrew school for their two eldest children and a few children from another Jewish family. During COVID, in-person activities had to stop but the school is expected to be underway again in September.

In addition to home schooling their children, the Chernitskys also try to make sure that their kids attend various events, to mingle with other children and gain an appreciation for the history and culture of their new home.

The rabbi and his wife are planning for the future. A successful online fundraising activity this past year has provided sufficient financial support to move Chabad House, which is also their home, to a property closer to downtown and only a few minutes from the university. This means that observant Jews could more easily join them for Shabbat. They would like to continue to involve more of the larger community in their Chanukah celebrations.

In the longer term, the Chernitskys hope to attract Jewish immigrants to Newfoundland from other parts of Canada, from Israel or elsewhere. Today’s Newfoundland is very different from pre-Confederation Newfoundland in its acceptance of newcomers. The province proudly welcomes immigrants and international students from any part of the world and sees immigration as a key component of its economic and labour market growth. Newfoundland’s relative affordability, along with the need for growth in its economy, most particularly its service sector, are reasons to be optimistic about that vision.

Our car travels took us the length and breadth of the magnificent Bonavista Peninsula and the Irish Loop, another peninsula in southeastern Newfoundland, as well as to St. John’s. We enjoyed hikes on the Skerwink and East Coast trails. Everywhere we went, we enjoyed the remarkable beauty of Newfoundland’s landscapes and the warmth of our hosts. It was not until I was gazing out from the plane’s window on our return flight – when I could see more fully just how rugged the whole topography of the Rock is – that I really understood how resourceful each of the small outport communities, which lie at the end of every spit of land, has had to be. My visual from up above gave me an appreciation for how resilience has come to be bred into the DNA of Newfoundlanders.