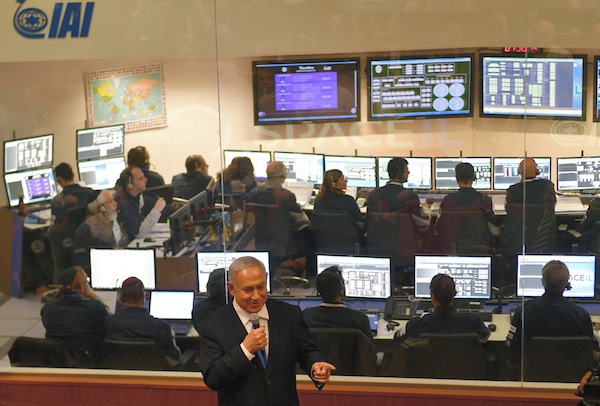 Prime Minister Binyamin Netanyahu at the Israel Aerospace Industries control room to witness the launch of Israel’s first attempt to put a lander on the moon. (photo from IAI courtesy Ashernet)

In the early hours of Feb. 22, Bereishit, which means Genesis, successfully lifted off on one of Elon Musk’s U.S.-based SpaceX Falcon 9 rockets. It is hoped that the 585-kilogram Israeli space vehicle will land on the moon in about six weeks’ time. “There are four countries that have launched a spacecraft to the moon, one of them is 800 times bigger than we are, one of them 500 times bigger, and one that is a little less than that,” said Netanyahu, referring to the United States, Russia and China. “We are a small country, but huge in achievements and in the capacity of our initiative. I hope that the spacecraft to Mars is already being planned.” He also said he hopes that, on April 11, “we will be able to celebrate the safe landing of Bereishit.”