There are a few vestiges that remain of the Jewish community in Calcutta, including the Jewish Girls’ School and Nahoum’s. (photos by David Berson) 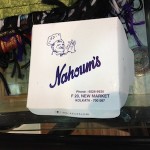 It was family history, alongside a taste for discovery, that took local Jewish community member and Or Shalomnik David Berson to Calcutta recently. A major Indian metropolitan centre near Bangladesh, it used to be home to one of India’s largest Jewish communities.

Berson’s mother, Seemah, is originally from Calcutta. Born there in 1931, she has lived in Vancouver since 1954. However, her connections to the city remain vivid. This past summer, the Recalling Jewish Calcutta (jewishcalcutta.in) virtual museum was launched, and it includes several contributions from Seemah.

“The Baghdadi Jewish community came to Calcutta during the British Raj,” explains the site. “When India gained its independence, they were unsure of what their future would be in an Indian India.” Many community members emigrated to other Commonwealth countries through the 1940s and ’50s, leaving “few traces behind.”

Among those traces are three synagogues, two schools, a cemetery and several businesses. “Ezra Mansions and the Ezra Hospital, Nahoum’s Confectionary, and two buildings in the zoo that are owned and endowed by Jews still bear Jewish names. There is the Belilios Street, Ezra Street and Synagogue Street. There are many other mansions, residences and office buildings that still stand but they no longer bear their Jewish names and few know they were once Jewish owned.” The site notes that there are “barely 30 Jews left in the community, most very elderly.”

While Calcutta attracted Berson with its density, architecture and wide Indian roads, the city’s Jewish jewel was the main draw. “It was very moving to see how deep the roots of the Jewish community were and how much of a role they played in Indian life, and I got a much better sense of the joy of life my mother experienced when growing up,” he said.

Nahoum’s bakery, a cultural phenomenon in its own right, combines Jewish and Indian cuisine. “It helped me make a connection with some of the community that lived there and are still in Calcutta,” explained Berson about visiting the bakery, where one can find cheese samosas and a unique type of boureka.

Berson said the food of the Jewish community in general is known for its creativity and its tastefulness. One of the many examples of an Indian dish that was popular in the Jewish community is aloo makala, a potato dish that is slowly cooked in oil. A connection of Berson’s mother, Flower Silliman, a native Calcutta resident, lived abroad for many years – including in Israel, where she established the first Indian restaurant in Jerusalem – before returning to Calcutta.

Central Calcutta and the Park Street-Esplanade region were the main areas where the Jewish community was centred. Built in the mid-19th century, the Great Eastern Hotel was recently renovated. It used to be a gathering spot for the Jewish community – including for Berson’s mother – to sip a beer. The New Market area was where the Judean Club used to meet. The Jewish Girls School today is secular and attended by all non-Jewish students, but one can still see where the mezuzah used to be fitted.

The splendor of the former community really came to life for Berson when he visited the city’s synagogues: Beth El, Magen David and Neveh Shalom, today culturally preserved by members of the city’s Muslim population. The back of Beth El included a mikvah and also a special oven to bake matzah, which had been in use until recently, supervised by the community’s few remaining Jews. Now, the buildings only see tourist groups, with the rare exception, such as last year, when the Israeli ambassador to India brought with him enough Jewish men to form a minyan for Simchat Torah celebrations at Magen David.

At the Jewish cemetery, grand in its magnitude, the high-water level makes traditional burial impossible. Bodies would first be wrapped in a shroud, then put in concrete slabs and entombed, giving the final burial an almost Egyptian feel, according to Berson.

While it would be ideal to visit the remaining Calcutta Jewish community in person, the Jewish Calcutta virtual museum – a project spearheaded by Silliman’s daughter, Jael – offers an important resource to anyone interested. There are several exhibits bringing the community back to life, including through a film gallery and sections on notable members of the community, women pioneers, Jewish businesses and more, at jewishcalcutta.in.