It’s a bat mitzvah year in our family. We’ve booked the photographer, the caterer, the DJ and the invitation company. Our daughter is studying her parashah and learning to chant the Haftorah and maftir.

I turned to JEDLAB, the Jewish educators’ forum on Facebook. I discovered that there is an organization expressly founded to support kids in their mitzvah project strategies. Called Areyvut (Hebrew for “social responsibility”), the New Jersey-based group offers consulting services – from a free phone consultation to more extensive, fee-based ones – and direct organizing of an array of hands-on, direct-action-style activities in which party guests can participate. Called “chesed fairs,” these might include game-board painting for a social-services agency, hat-making for cancer fighters or cupcake-decorating for a local day centre. Clients need not live in the area, or even in the United States.

Elsewhere, Areyvut teams up with synagogues and youth groups to teach kids to be “mitzvah clowns” for residents of long-term care facilities.

I decided to take up Areyvut’s offer to engage in a free phone consultation on my daughter’s mitzvah project idea. She had chosen a complex topic – addressing the economic effects, particularly around access to housing, of urban gentrification. Talking to Areyvut’s staff reminded me that mitzvah projects need not be confined to financial giving. Advocacy and awareness can be just as important.

I decided to take some of these ideas to my own community. Through word of mouth, I initiated a b’nai mitzvah club to help develop mitzvah project ideas. At the first meeting, which we called “Hot Chocolate for Hot Issues,” I led a workshop to get the kids thinking about a given issue, how to identify deeper causes of the problem and how to consider the range of action one might take to address these problems.

For our mitzvah club this year, each child will identify a pressing issue around which he or she is passionate and then develop an action plan, a plan that should involve at least two of the following: fundraising, political advocacy, public awareness and direct action. Fundraising could involve donating a portion of bar or bat mitzvah gift money, or holding a bakeathon or danceathon. Political advocacy might involve letter-writing to elected officials. Public awareness could include an Instagram campaign increasing public understanding of the issue. And direct action means identifying a relevant organization at which the child can volunteer.

Sometimes, there is an identified need, but not an established organization dedicated to it. In these cases, Areyvut can support kids in being more ambitious – for example, in creating their own nonprofit organization. Billy’s Baseballs grew out of a bar mitzvah initiative where a child organized the sending of decorated baseballs to soldiers stationed abroad.

Daniel Rothner, Areyvut’s founder and director, puts it this way. As Jews, we are supposed to be a “light unto the nations,” engaged in making the world a better place, he told me. And the impact extends beyond the Jewish community, he added. He is also passionate about getting kids to think about the deeper causes. What of Dave, the homeless man who appears at the soup kitchen every week? Why does Dave need to come week after week?

Our own b’nai mitzvah club has come a long way from kids reciting the “today I am a fountain pen” joke. As my daughter said, the bar or bat mitzvah milestone means that “technically, you’re becoming a woman or a man and, once you are [an adult], you have a responsibility to help out with the issues in the world and in our community.” 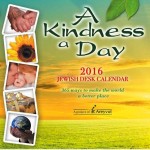 Areyvut, a New Jersey-based nonprofit organization whose mission is to infuse the lives of Jewish youth and teens with the values of chesed (kindness), tzedakah (charity) and tikkun olam (repairing the world), has released its 2016 A Kindness a Day Calendar.

This flip calendar offers 366 suggestions (it’s a leap year!) for people of all ages to better themselves, their communities and the world at large. For example, Jan. 1’s entry suggests, “make a New Year’s resolution that will positively impact someone else’s life.” Other entries remind readers to “call and wish Shabbat Shalom to an out-of-town relative” or to “assist someone who is unemployed with writing a resumé and finding a job.” Beneath each act of kindness is a traditional Jewish text that explains from where the act of kindness is inspired.

Areyvut debuted A Kindness a Day in 2005 and continued to create calendars through 2009, the last year that the flip-book was published. Despite a six-year hiatus, the A Kindness a Day calendar is back with suggestions, sources and inspiration that will hopefully help readers to play a more active role in their families and communities.

“Charity, kindness and social justice must be an integral part of everyone’s day,” said Daniel Rothner, Areyvut’s founder and director. “The 2016 calendar allows for these core Jewish values to become more aligned to the context of people’s daily lives. A Kindness a Day is a great educational tool for children and adults alike; as well as homes, schools and other organizations, both as a guide to help instil Jewish values into one’s life and as a springboard for discussion and study.”

The 2016 calendar also includes a thematic index that categorizes the acts of kindness by theme (for example, loving your neighbor, tzedakah, tending to the sick, volunteering, prayer, etc.) and a glossary of terms. Calendars can be purchased on Areyvut’s website areyvut.org/shop. For sample pages, and additional information, email [email protected].