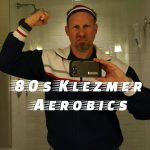 Daniel Brenner’s klezmer aerobics workout and performance was inspired by the Klezmorims. (photo from Daniel Brenner)

Rabbi Daniel Brenner – who grew up in the small Jewish community of Charlotte, N.C. – has come up with an aerobic workout set to klezmer music.

Brenner graduated from the Reconstruction Rabbinical College which, at the time, was led by Rabbi Art Green. He began performing in 1987 with the late comic legend Chris Farley at the Ark Improvisational Theatre, and has been doing theatre ever since.

In rabbinical school, Brenner created the one-man-show Faster, Rabbi, Drill! Drill!, which won an All Out Arts New York playwriting award (2000). He also wrote a series of Chassidic folktales/plays for Philadelphia’s Theatre Ariel and has had a play produced by New York’s Vital Theatre, in addition to producing a handful of Purim shpiels. Today, he performs regularly with the band Midnight Nosh, on guitar, and lives with his wife Lisa and their three children in Montclair, N.J.

“Growing up, my home was a place that other people came to experience Judaism,” Brenner told the Independent. “There were no other Jewish families on my street, so my home was a site where many non-Jewish people experienced Judaism for the first time.”

Brenner’s love of music came early on, as he listened to a mix of Shlomo Carlebach and contemporary American folk. In the 1980s, Brenner’s parents went to a Klezmorim concert and came home with their record Streets of Gold.

“I was ecstatic listening to the music,” said Brenner. “I couldn’t believe that we had music that had so much soul. As a kid, I was enthralled with Michael Jackson – music you can dance to. But, when I heard the Klezmorim, I was like, this music is just as good for dance. I loved it.”

While working out and listening to klezmer, Brenner thought of how amazing it would be to lead a class using this music. Originally, he thought of pairing it with Zumba, but then decided that klezmer aerobics would be the best fit.

As he worked on the idea, he realized this could be more than just another class. “I really tried to think of what story it wants to tell,” he said. “That really helped me get to the place where it was a full narrative, and a full show about the relationship between someone in the 1980s and someone in the 1880s.

“I thought about it in terms of the two great shifts in human past civilization, recent history – the shift away from agricultural, industrial, rural to urban that happened in the 1880s, and then also the 1980s, the shift between the industrial era and the digital era. I wanted the story that I told to be about that shift.”

Brenner started researching moves that would reflect, as closely as possible, the 1880 dance fashion. He discovered Steven Lee Weintraub, who teaches Jewish traditional dance, and engaged him in private lessons. Brenner videotaped these lessons and practised intensely to get a good handle on the movements and to effectively incorporate them into his repertoire.

“I told my beloved, I told her, keep in mind that I want to do this over the next decade, so she understands I’m definitely thinking long-term about what I want to do with the project,” he explained. “My goal really will be to work together with local klezmer bands in various places around the world to create an experience for people – to perform a show as a way to not only teach dance and tell the story, but as a way to connect people to the local klezmer scene who may not experience it otherwise.”

Brenner has created ’80s Klezmer Aerobics, a family-friendly, interactive dance-storytelling workout wherein “the 1880s meets the 1980s.” In the show, Brenner plays an aerobics instructor and leads an audience-participation workout, as he tells the story of a dancer, Levi, and his apprentice. The audience learns the traditional Old Badchen dances that Levi learns and creates when he runs off to Warsaw.

“I feel that the fun ’80s Klezmer Aerobics and the experience is going to be a draw for a lot of people,” he said. “Then, I also feel like giving people the opportunity to hear live klezmer music is a rare thing. In anyway I can, I want to help people dig the stuff I dug when I was a boy in N.C., putting that record on for the first time.”

In addition to the family-friendly version, Brenner has been considering splitting the experience into two parts – one as a matinée for the family and one in the evening, attracting a different crowd.

Since being performed last November, there have been a few shows in different venues so far. Brenner is working with some Canadian friends to create shows in Canada, having received a few inquiries about it from Jewish community centres.

“I’ve also heard from New York, Atlanta and North Carolina,” he said. “I hope to take it around the Jewish world.”

For more information, visit klezmeraerobics.com or check out Klezmer Aerobics’ Facebook page. There are also videos available on YouTube.