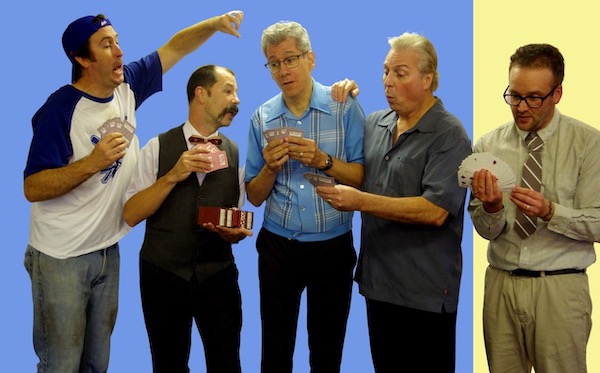 “For me, the ‘coolest’ thing is Sylvia herself,” Advah Soudack told the Independent. “From everything I have read and heard, she was a dynamite of a woman – fiery, passionate and full of life. The woman lived until 102, for goodness sake, and did so with a heart murmur that caused much concern for doctors and her parents when she was young. I like the story of how she met her husband, Harry. The two were on a Jewish singles cruise and, when Harry witnessed Sylvia dive enthusiastically off the side of the boat, he knew in that moment that she was the gal for him. I only wish Sylvia was alive to see the show.”

Soudack takes on the role of Sylvia Ablowitz, née Goldstein, whose father, Abraham, built the Sylvia Hotel and named it after his daughter. The family’s story and stories about the renowned establishment in English Bay are depicted in Two Views from the Sylvia, which is being presented by Kol Halev Performance Society Nov. 8-12 at the Waterfront Theatre.

“This is the most ambitious show Kol Halev has produced, and their first as a registered society. But it fits perfectly into their mandate to tell stories of Jewish history and local Vancouver history, with music, song and performance, in an engaging and entertaining way,” said Adam Abrams, who plays Abraham in the production, and is also vice-president of Kol Halev. “I’m so excited to be a part of it,” he said.

Two Views from the Sylvia is comprised of two original one-act plays. Its genesis can be traced back some four years, to a Jewish psychology network meeting attended by Kol Halev president Sue Cohene and Ablowitz’s great-niece, Marsha Ablowitz, who pitched the story of her famous great-aunt to Cohene. In mid-2013, members of Kol Halev met with Marsha Ablowitz and her mother, Sally Seidler, who is now 99 years old.

By August 2013, Joan Stuchner had drafted the first two pages of a play. A few months later, Deborah Vogt joined the writing team, with she and Abrams assisting Stuchner. Sadly, Stuchner died in June 2014 of pancreatic cancer and Vogt had to complete the script without her.

Vogt’s one-act play, Sylvia’s Hotel, with music by Britt MacLeod and Kerry O’Donovan, lyrics by MacLeod, is set in 1912, and focuses on the origins of the hotel and on the Ablowitz-Goldstein family. “Both young Sylvia Goldstein and Joe Fortes, the beloved lifeguard who taught Vancouver children to swim, experience the challenges of those who didn’t quite ‘belong’ in the Vancouver of the time,” notes the promotional material. It forms Act 1 of Two Views from the Sylvia.

Act 2, called The Hotel Sylvia, is by Cathy Moss and Kelsey Blair. It focuses on the period after the building of the hotel, and “we meet the characters whose lives and loves became interwoven with the story of the Sylvia over her 100-year history.”

“Several of the stories told in this one act play are the stories as told to Cathy Moss and me by Huguette Gingras, who was the front-desk clerk at the Sylvia Hotel for 35 years,” said Cohene.

Tom Pickett, who plays Fortes in Act 1, plays the character of John in Act 2. “Though John is an independent character, he cares about the Sylvia the way Joe cares about the kids and English Bay so, in my mind, I imbue a hint of John with a bit of Joe and maybe vice versa,” said the actor.

Pickett – who said he has played Fortes a few times before – was immediately on board when he heard that Christopher King was the director and Shelly Stewart Hunt was the choreographer of the production. “Then I had the pleasure of talking with Sue Cohene on the phone and the connection was instantaneous,” he told the Independent. “And then, as we began rehearsals, the artistic opportunities to honour a Vancouver landmark like the Sylvia and represent a historical figure like Joe Fortes deepened. I think many people know of the Sylvia but don’t know a lot about the Sylvia. I’ve done a gospel concert at the Sylvia, my wife’s cousin from Montreal always stays at the Sylvia, my mechanic, the teller at my bank, the list goes on.”

“It seems that everyone has a story or a connection to the Sylvia,” agreed Abrams, “so it’s exciting to be telling a story about something so iconic, that means so much to people in Vancouver. And though I’m thrilled to have a great role, I’ve been mostly just impressed with what everyone else is bringing to it. There are some really beautiful moments both visually and dramatically, and some wonderful music, too. I think people are going to leave the theatre humming the title theme, ‘At the Sylvia’!”

About his character in Act 1, Abrams said, “Abe is someone who wants more than just personal success, he really wants to make his city a better place and feels the hotel will help achieve that. He’s also proud of his Jewish heritage and wants to show what his people can accomplish – despite facing a lot of the prejudice that was so common at that time.”

In Act 2, Abrams plays Mr. Lowry, “the manager of the present-day Sylvia, [who] is trying out Franny for the front-desk job to see how she does. He just shows up a couple of times, but I’m finding a lot of little moments of humour in his appearances.”

In preparing for the show, Soudack met with Marsha Ablowitz. “I not only flipped through piles of photos and heard stories,” said Soudack, “but also held Sylvia’s hairbrush, mirror and curling iron with her initials gracefully engraved on them in my hands. If the audience is paying close attention, they may even catch a glimpse of these artifacts in the show.”

While Sylvia appears in Act 1, she is only talked about in Act 2. In the second half of the production, Soudack plays Nora, who appears, said Soudack, “as a flashback to the Sylvia during the Second World War.”

“She is an interesting character, not only because of her independent nature, but also because of the times in which she would exercise this independence,” said the actor. “Nora, as explained by her daughter Gloria in Act 2, would visit the Sylvia twice a year. Gloria mentions that her mother, Nora, would come to write in her journal. She made a routine of it and even wore the same blue dress…. It turns out that she didn’t always come to write in her journal, she would also come to the Sylvia to dance.

“For me,” said Soudack, “Nora is an intriguing character to play because there has to be a reason why she came to the Sylvia and did so year after year. In the script, she talks about ‘taking a night off from everything.’ She mentions things about the war, headlines, air-raid precautions, however, as the actress, I choose to dig deeper and find what else she is ‘escaping’ from and taking the night off from…. There is a pure innocence to Nora going to the Sylvia twice a year to write in her journal and dance, but is there also an alter ego or an alternate life she desperately wants to explore?”

Other Jewish community members in the cast are Anna-Mae Wiesenthal and Joyce Gordon, while Heather Martin is associate producer and Gwen Epstein is on the production team. The Jewish Museum and Archives of British Columbia has created a photo exhibit, which will be on display at the theatre.

“Lots of things are very exciting,” said Cohene, “like watching amazingly creative choreography being developed on the spot. Hearing beautiful singing by the cast makes me want to sing along. I don’t – I am the producer and need to remember my role.

“I hope that people who come to the show are aware that we are a community theatre group. We are so fortunate to have the wonderful participation of two professional actors,” she said, referring to Pickett and Soudack, “who work alongside our very talented group of emerging actors. Kol Halev strives to be inclusive, accommodating performers of all ages, backgrounds and levels of experience. We aim to offer the opportunity to learn and create, in all aspects of our production. I’m hoping that this value is appreciated when the public sees the show.”

For tickets ($28) – and a chance to win free ones with your story of the Sylvia – visit kolhalev.ca.