It was not that long ago that seeing a psychiatrist meant that people saw you as unstable or abnormal in some way. While societal views on many things have broadened, the stigma of mental illness remains. So, how do we go about changing these perceptions? According to Dr. David Goldbloom, a psychiatrist at the Centre for Addiction and Mental Health in Toronto, this is something achievable in baby steps. And a step he has taken is to publish a book that not only looks at his patients’ experiences, but his own.

“I come from a long line of pediatricians. If heredity was going to play any kind of role or environmental influence, you might think I would have ended up in that field.”

But Goldbloom’s father-in-law was Nate Epstein – a well-known figure in Canadian psychiatry. Epstein was formerly the chief of psychiatry at the Jewish General Hospital and, later, the founding chair of the department of psychiatry at McMaster University. “My exposure to him at close range was a formidable influence in terms of my ultimate career decision,” said Goldbloom.

The complexity of psychiatric illness in terms of its biological, psychological, social and cultural aspects, which requires one to think broadly about solutions to sufferers’ problems, drew Goldbloom to the field. And, during his career, he has written many books targeted to medical professionals, but only recently did he choose to write a book explicitly geared to non-professionals.

“It’s a very different kind of writing,” he said. “I would say it’s much tougher than writing a textbook. I wrote it with Dr. Pier Bryden. She and I cooked up the idea together.

“It was driven by a wish that we shared to make psychiatry better understood by the general public – not reducing it to some cartoonish stereotype. People who have mental illness themselves or those who treat them, we always thought there was a measure of curiosity in the general public about what the reality is versus the Hollywood or TV depiction.” 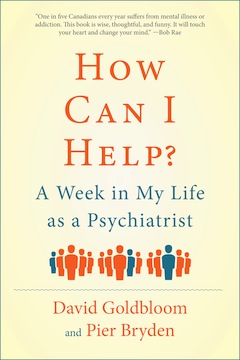 How Can I Help? A Week in My Life as a Psychiatrist uses, as its title says, one week in Goldbloom’s professional life as its narrative framework. While Bryden is also a psychiatrist, she does not feature in the book.

In How Can I Help?, Goldbloom and Bryden explore the world of psychiatry, and talk about how it intersects with Goldbloom’s personal life, as they know that people are curious about how health professionals deal with the inevitable sorrows and joys of working in the field.

The book “contains some very real stories of real patients with their real names used with their real permission,” he said. Other patients described in the book are fictional composites, “masterfully disguised.”

Goldbloom himself is more revealed. “We felt, if these individuals were going to be candid and courageous enough to talk about their own experience, then I had better match them in terms of talking about my own reactions, including my reaction to the very real suicide of one of my patients.”

While Goldbloom said this was not the only time in his 30 years of practice that he has experienced a patient’s death, both he and Bryden felt that this one instance was particularly poignant. They also took the opportunity to write in more general terms about the impact of suicide on physicians.

“One of the other things the book does is use the events of the week to springboard into some of the larger issues within psychiatry,” said Goldbloom. “It’s not just a narrative, but it looks at some of the historical [elements], controversies, stuff like that.

“Whereas most people think of a psychiatric practice as being set in a secluded, private office, with somebody coming in Tuesdays at four to talk about themselves in a manner interminable, the reality of acute psychiatric care in a modern hospital is very different.”

According to Goldbloom, possibly the first thing a reader might be struck by is the variety of different settings in which they find him. He consults in his office, of course, but also through videoconferencing to reach distant areas, in emergency rooms and acute care units, as well as out in the community.

Readers will be able to learn of the varied roles psychiatrists in Canada play, and Goldbloom hopes the book will highlight the breadth of experiences – the professionals’ as well as the patients’.

When asked if another book project is on his radar, Goldbloom said, “I have to wait and see how the first book does. It’s encouraging that it was on the bestseller list, within a week of its publication, in the Globe and Mail and the Toronto Star … but, you know, it’s early days yet.”

How Can I Help? is available in most major bookstores, as well online via Amazon and Indigo.