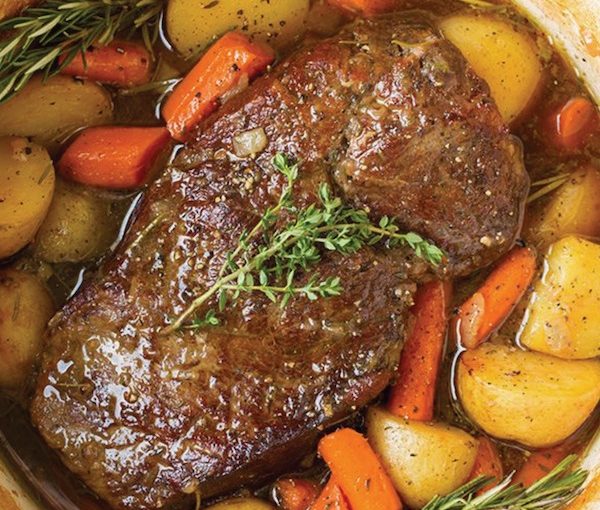 It was an uber-yummy pot roast that spawned the Accidental Balabusta. (photo by Shelley Civkin)

The definition of balabusta goes like this: 1) an impressively competent homemaker; 2) female head of household.

According to the Jewish Chronicle, “Balaboosters [sic] are rather out of fashion these days, victims of feminism and women’s magazines. Still, at least according to family myth, all of our grandmothers were balaboosters – heroic homemakers who raised large numbers of children in straitened circumstances and made real gefilte fish from a carp that swam about in the bathtub.” Not my Jewish grandmothers! Mine were neither spectacular cooks, nor did they have a bathtub filled with fish.

I don’t buy the idea that balabustas are out of fashion these days. I believe they’re just contemporary versions of the old-time balabustas. We hold down jobs, raise kids – well, not me, personally, but millions of other modern balabustas – and we’re active in our communities. And we just happen to bake, cook, do the laundry, clean the house and more. I, for one, am flattered to be called a balabusta. Even an accidental one. I feel like it puts me squarely in the category with other competent Jewish women, who juggle multiple tasks and are the glue that holds their families together.

So, how did I come to be crowned “the Accidental Balabusta”? It was the day I made a textbook perfect, uber-yummy pot roast. My husband Harvey took one bite and proclaimed me the Accidental Balabusta. Just like that! To substantiate his declaration, a week later I baked a batch of kalamata olive and rosemary challah buns (recipe from Rising: The Book of Challah by Rochie Pinson). They were exquisite. Or so I’m told. For the record, there was no bread machine or KitchenAid dough hook within 100 metres of my tiny galley kitchen. Just me, a 13-litre stainless steel bowl and enough flour to coat a bison.

For an encore, I made a handmade, painted challah cover. Next thing you know, I’ll be herding sheep. Anyway, that’s how the new moniker stuck.

Regarding the definition of balabusta, I might qualify as the “female head of household,” depending on whom you ask. As for being a remarkably skilled homemaker … well, the jury’s still out on that one. Way out. Truth to tell, most people I know would unequivocally classify me as the anti-balabusta. “That Shelley Civkin is a real balabusta!” Said nobody. Ever.

It’s not for lack of trying. OK, for about 50 years, it was. I simply wasn’t interested in cooking and cleaning. I was single and worked full-time. Since I only got married at age 53, the childbearing train had left the station. Empty. I was zero for three.

Then heaven happened: I retired three years ago. I took the advice of a wise rabbi, who told me that retirement doesn’t mean just sleeping in and doing nothing. It means helping others, doing mitzvot and finding your purpose in life. Did I mention I regularly volunteer to bake challah for seniors? I took the rabbi’s words to heart, and here I am today, the Accidental Balabusta. I’m sure my family and friends are laughing their tucheses off right now. “Shelley, a balabusta? You gotta be kidding?” For most of my life I was a water-burner.

If you ask Harvey, he’ll tell you I’m a great cook. To wit, he’ll eat anything. Exhibit A: the fish fiasco. A year or two into our relationship, I decided to make breaded snapper. So, I used my father’s recipe and coated the fish in flour, eggs and breadcrumbs. While it was frying, a tiny piece of breading came off, so I popped it my mouth. Something didn’t taste right. I checked the expiry date on the egg container – it was fine. Then I put my finger in the bread crumbs to taste them – they were good. Finally, I put my finger in the jar of flour. Only to realize that I’d just coated all my fish in icing sugar. Harvey, G-d bless him, ate the icing-sugar-coated fish. I went out for sushi.

Then there was the infamous lamb debacle. It was New Year’s Eve and I decided to go for broke, so I made a rack of lamb. I covered the lamb in my usual Dijon mustard, lemon and garlic mixture and put it in the oven. Our first bite in, both of us noted the unusually strong lemon flavour. But it was tasty.

An hour later, it wasn’t. Harvey ended up in the bathroom driving the big, white porcelain bus. Several hours later, I landed in the hospital emergency department having three bags of IV fluids pumped into me. Let’s just say I got very dehydrated, and leave it at that.

As for being a great homemaker, that’s not my strong suit. What I mean to say is this: I am not on a first-name basis with my vacuum cleaner. In fact, I couldn’t tell you the brand if my life depended on it. I am to housecleaning what porcupines are to Winnebagos. If tchotchkes aren’t screaming out to be dusted, leave well enough alone. Let me clarify: I’m not dirty. I’m just a little messy. I figure there are more important things to do than clean house. Like read. Or eat chips. When guests come over, though, I pull out all the stops. OK, I pull out the fancy hand towels. Actually, Harvey pulls them out. I watch.

The last time I did anything domestic was in Grade 3 Hebrew school, when our teacher had all the girls embroider kippot for the boys. The boys’ assignment – wait for it – was to wear the kippot. No sexism there. Of course, it was the early 1960s. So, you’re welcome, boys.

But back to the balabusta thing. It turns out that I actually enjoy cooking and baking. Who knew? With nothing but free time on my hands now (except for my volunteer activities), I can kick back, put my hair up and tie one on. An apron, that is.