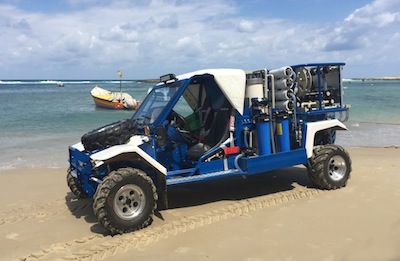 On July 10, at Givat Olga, Indian Prime Minister Narendra Modi, centre-left, and Israeli Prime Minister Binyamin Netanyahu sample water that has just been purified to the World Health Organization standard in the Galmobile. In February 2015, Gal Water Technologies Co., from nearby Caesarea, launched the mobile water purification system. The small vehicle, the first of its kind in the world, weighs 1,540 kilograms, operates on a 12-volt electric supply and can be set up in less than half an hour. It can connect to almost any water source. (photos from Ashernet)