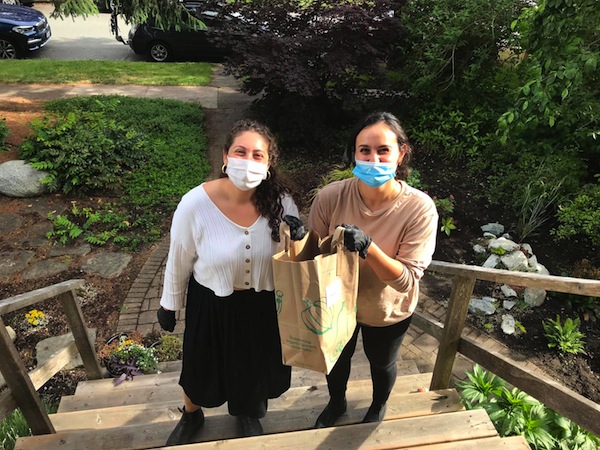 When 25-year-old Vancouverite Becca Schwenk considered how she could make a small impact to reflect Jewish compassion, care and kindness for local Black families during the Black Lives Matter protests, the Jewish ritual of shivah came to mind. She knew the power of shivah meals to soothe people in times of grief, so she and her longtime friend Madison Slobin, 26, decided to coordinate Shiva Delivers, a collective effort whereby Jews would cook a dinner meal for a Black household in Vancouver.

“We hoped it would lighten their load and bring a bit of joy,” Schwenk said. In emails, Facebook and Instagram posts sent to members of the Jewish community, the pair noted that “this past week has been one of grieving for Black folks. Not only have Black lives been disproportionately impacted and lost due to COVID-19, but we have witnessed police officers murder Black people in broad daylight, as well as in their own homes. As Jews, we know what it feels like to experience a collective tragedy, especially in the past two years, as antisemitic violence has been on the rise. We also know how much it has meant to us when other communities have demonstrated their solidarity.”

They encouraged volunteers to “cook with your loved ones, and have critical conversations about unlearning anti-Blackness and racism. It’s a beautiful thing when we can hold one another accountable, free of judgment, and keep our hands busy in some challah dough,” they wrote.

Their message spread quickly through social media and, within 24 hours, they had volunteers signing up to cook meals. Ultimately, they received 90 meals that they were able to deliver to 48 Black families in the Lower Mainland, from Surrey to East Vancouver and the University of British Columbia.

“People made beautiful, multiple course dinners including salmon with dessert, brisket and matzah ball soup, roast chicken with vegetables and delicious cakes,” Schwenk said. “It was really clear that considerable effort went into each dish and we felt really proud to drop these meals off.”

Those preparing the meals represented the diversity of the Vancouver Jewish community and deliveries came from Orthodox Jews, mixed families, rabbis and people from all political spectrums.

“We didn’t explain much about our initiative when we sent out the notification, but people just got it,” Slobin said. “We were unified by the instinct to do tzedakah through our collective love language of delicious food. I found it beautiful that our community is so united about the idea that Black lives matter, and that they really wanted to provide comfort to Black families during this time.”

The two friends are both professionally involved in human rights work. Slobin works for Vancouver Aboriginal Child and Family Services, while Schwenk is a diversity and inclusion consultant for Cicely Blain Consulting. Even though they’re not planning to organize a second Shiva Delivers event immediately, they hope it will inspire members of the Jewish community to do more.

“This was a way for us as a community to say, ‘We know how valuable comfort and nourishment are in moments like these, and we’ve got your back,’” Slobin said. “I want to see how folks draw inspiration from this and tap into the potential for solidarity beyond the Jewish community.” She noted that other Shiva Delivers initiatives were held in other parts of Canada and in the United States.

Feedback from recipients of the meals was overwhelmingly positive and grateful. “Thank you so much for doing this,” one recipient wrote. “We are grieving such a tremendous loss of life in the middle of this pandemic, where we are isolated from our wider community and loved ones. This helps a lot.” Another recipient said the display of kindness and generosity towards the Black community at this time was especially meaningful: “It means so much to be seen in our grief, and held and cared for in this way. Such community-to-community support is so deeply valuable and I truly believe it is our way forward into a collectively liberated world. Thank you for looking out for us and sending us love in my personal favourite love language – good food!”

Reflecting on the power of their event, Schwenk and Slobin said it provided “a glimpse into a hopeful future of what solidarity can look like. It allowed us to imagine a world where traditions are not only respected, but provide cross-cultural comfort.”