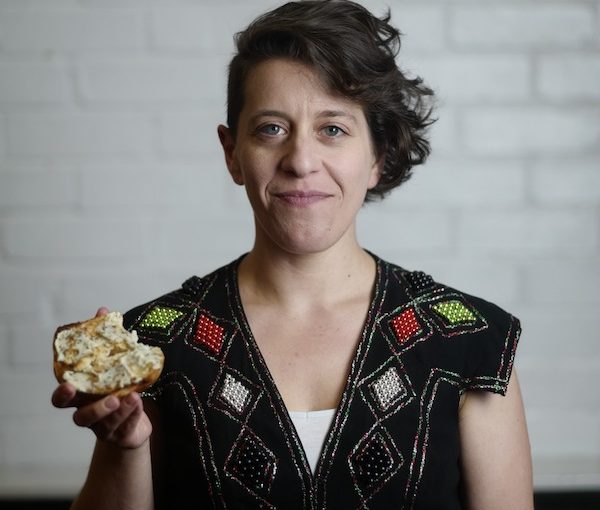 “In recent years,” playwright Tamara Micner told the Independent, “I feel there’s been increasing discussion about inherited trauma in indigenous communities and in other minority communities, such as Japanese- and Chinese-Canadian communities. For me, it’s been valuable to remember that, sadly, we as Jews are not alone in inheriting collective trauma. In fact, I also know white, Christian Canadians who have it, too. The tsures we carry is unique in some ways, but we’re definitely in good company.”

Micner, who now lives in London, England, will be returning home to Vancouver for a couple of weeks to perform her new one-woman show, Holocaust Brunch, at the Chutzpah! Festival. It is one of two theatre works that will see their Canadian première at this year’s festival; the other is The Diary of Anne Frank LatinX, directed by Stan Zimmerman, who is based in Los Angeles.

While The Diary of Anne Frank was mounted by Fighting Chance Productions last year (jewishindependent.ca/glimpse-of-life-in-the-annex), Zimmerman’s production features only Latinx actors. This is what makes this version of the play – written by Frances Goodrich and Albert Hackett Based and adapted by Wendy Kesselman – unique.

“I chose to use Latinx actors for the characters in the attic,” Zimmerman told the Independent, “after seeing a CNN report about a Jewish woman in L.A. who arranged to hide a Latina mom and her daughters after her husband was suddenly deported by ICE [U.S. Immigration and Customs Enforcement].

“Contrary to initial media reports – that went worldwide – we are not replacing the Nazis with ICE agents [in the play]. We are performing a word-for-word production of the script that Natalie Portman starred in on Broadway in 1997. I’m not saying the situation is exactly the same as the Second World War, but there are parallels – parallels that we can hopefully learn from. Only then can we live by Elie Wiesel’s famous phrase, ‘Never again.’”

Some Jewish community members were concerned about Zimmerman’s casting choice.

“Initially,” he said, “I had a few Jewish friends question my decision to cast Latinx actors in the play. For them, it was more about not wanting to tarnish the legacy of Anne Frank. But, when they saw that we were honouring her memory, they understood the power of this production. I took to heart the insightful words of a young Anne Frank from her diary – ‘Our lives are all different, and yet the same.’”

The concept of “different yet the same” is one of the reasons that Micner was interested in telling the stories of Bluma and Isaac Tischler, who have both passed away. Born in Poland, they “met in medical school in Tajikistan during the war, and went on to become renowned Vancouver doctors.”

“I have known the Tischler family since 1987, when their daughter Yael and I did What Do I Do When I’m Two? together at the JCC,” said Micner, referring to a program at the Jewish Community Centre of Greater Vancouver. “Our parents and grandparents have also known each other for many years.”

That said, Micner explored some of her gaps in understanding, through creating Holocaust Brunch.

“Growing up,” she said, “I felt there was a disconnect between ‘the Holocaust story’ I was taught, which focused on Western Europe and camps, and my own family’s story, which was about living in Eastern Europe (Poland) and surviving the war in the Soviet Union. The Tischlers’ story has those parallels as well, and it feels important to me to talk about a kind of Holocaust story that I haven’t seen told in wider culture, and that some non-Jews I know have never even heard.”

Micner is no stranger to writing plays based on people she knows.

“I have created shows in the past that are inspired by my own family,” she said. “Holocaust Brunch is partly about another family’s story, and started with the Tischlers offering me part of their family’s story to tell in a piece of theatre. I take that offer very seriously as an act of trust and a responsibility, as the creator and performer of the piece. We’ve had several conversations along the way about the central questions and themes of the piece as it has taken shape, and they have seen the show as it has evolved.”

One of the central aspects of the work is looking at trauma from a third-generation perspective.

“I am indeed part of the ‘third generation,’ and Holocaust Brunch explores what it’s like living as a descendant of Holocaust survivors, two generations removed from that history and trauma,” said Micner. “It’s certainly based on some of my experiences and, inevitably, incorporates aspects of other people’s experiences based on conversations I’ve been part of, books and articles I’ve read, and so on. There are many of us who are thinking and talking about these issues.”

In contrast, Zimmerman witnessed a lack of discussion and knowledge about the Holocaust and, specifically, The Diary of Anne Frank.

“I was quite shocked,” he said, “when the 15-year-old actor playing Anne told us that she did not know who Anne Frank was before auditioning for our production. As a Jew, I grew mad to learn that Anne’s diary is no longer required reading in the California school system. I decided then that it was vital to get as many student groups as possible to see this play, with this cast.”

And it hasn’t been only the cast and audiences who have learned something from the play.

“Although I was a good student at my temple’s Sunday school,” said Zimmerman, “being involved in this play opened my eyes to so many stories about the Holocaust that I never knew before. These important lessons were gained by visits to several museums and meeting many survivors and hearing their stories firsthand.”

He added, “As many of our survivors pass, it is important for us as artists to find creative ways to keep Anne’s story alive.”

One of the ways in which Micner creatively tells her story is with humour. Describing Holocaust Brunch as a “dark comedy,” Micner explained, “I think there’s a history of Ashkenazi Jews using comedy to look at hard things – the oppression we’ve suffered, displacement, antisemitism, poverty and so on. Holocaust Brunch is certainly engaging with that tradition,” she said. “I think there’s also a history of Ashkenazi humour being self-deprecating – as in, making fun of ourselves – and, one of the things I’ve been interested in, is looking at where that comes from and what it would mean for us not to be the butt of our own jokes. Holocaust Brunch is using comedy to look at communal trauma, and how we might be able to heal from that. The show also uses humour to explore stereotypes and assumptions that some non-Jews have about Jews. I think laughter helps us open up and look at hard places.”

For his part, Zimmerman would like audiences who come to see The Diary of Anne Frank LatinX “to feel like they literally stepped into the shoes of these characters – just like the actors have. Then we can all have this highly emotional and very visceral experience that can only be achieved communally with live theatre.”