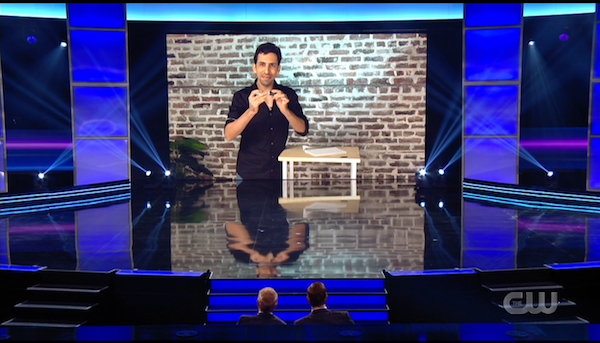 Illusionist Vitaly Beckman in the midst of fooling Penn & Teller on the March 19 broadcast of Penn & Teller: Fool Us. (screenshot)

Illusionist Vitaly Beckman has done it again – he stumped Penn & Teller a second time. The co-hosts of CW television network’s Penn & Teller: Fool Us could not figure out how Vitaly made a cup of coffee and a muffin appear from seemingly nowhere, brought into existence by his mere drawing of the items. They also could not figure out how he made the breakfast disappear, by simply tearing the illustration out of his sketchbook.

Vitaly’s winning performance, which aired March 19, can be seen via his Facebook page, facebook.com/beckman.vitaly, YouTube, or jewishindependent.ca. He first stumped the famous magicians in 2016 and his return to the reality show brought some tough (joking) remarks from Penn, who said he thought Vitaly was a nice guy the first time they met. Noting that he and Teller don’t like to be fooled once, let alone twice, Penn said, “You’re not a nice guy. You’re someone we have to take down!”

Despite the jovial animosity, Vitaly, who admitted to having been nervous in his first appearance on the show, told the Independent, “I was much more comfortable this time. However, the illusion I prepared, even though it looked simple in its execution, it was quite difficult to perform, requiring a lot of concentration, precision and coordination. I was rehearsing it for a few months before the show. So, when I was performing, I focused all of the nervous energy to work for me and help me execute well.”

Penn & Teller’s guesses at Vitaly’s secret – the use of mirrors and/or hidden assistants off-stage – proved incorrect, garnering Vitaly another Fool Us trophy.

Vitaly performed his act from his home in Metro Vancouver, while Penn & Teller were in Las Vegas, and a virtual audience appeared behind them.

“I’m used to feeding off a live audience’s energy and reactions, so not having any definitely makes it more challenging,” said Vitaly. “When I perform live, I like to interact with the audience, hear them laugh and be amazed; sometimes I bring a volunteer on stage. I purposely designed an act that wouldn’t rely on any of that, yet still translated through the TV screen. I think we all can connect to the idea of making a cup of coffee and a muffin or another favourite dish appear whenever we want one, and it’s certainly nice to have that ability during a pandemic!”

Vitaly is currently working on some TV projects and planning live tours. “I’m also working on brand new illusions, and can’t wait for you to see some of the new things,” he said.

Vitaly added, “I love to stay in touch with my fans, and hear their feedback about their favourite acts and what are they up to, so feel free to send me messages through my Facebook page.”