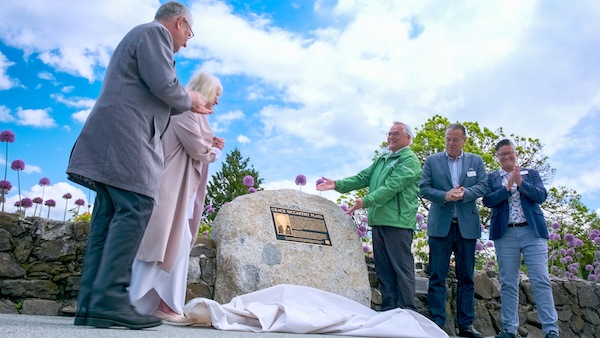 On May 27, the Vancouver Board of Parks and Recreation commemorated politician, former Park Board vice-chair and lifelong ambassador for the city’s greenspaces Grace McCarthy with a new plaque and plaza in Queen Elizabeth Park, by Bloedel Conservatory.

“Grace McCarthy was a true Park Board pioneer and her passion for her hometown of Vancouver can be seen across the city,” said Park Board chair Stuart Mackinnon in a release. “VanDusen Botanical Garden, Stanley Park Christmas Train, the lights of Lions Gate Bridge, we can enjoy these cherished landmarks today thanks to Grace’s unwavering drive and commitment.

“Grace was instrumental in seeing the Bloedel Conservatory opened in 1969 and I can’t think of a more appropriate place to celebrate her legacy. Grace McCarthy Plaza is a fitting tribute to a proud public servant of the city.”

During her three terms on the Park Board between 1960 and 1966, McCarthy led efforts to secure open spaces for park development and coordinate recreational activities for people with disabilities. She was elected as the first female vice-chair in 1966 and successfully ran for provincial election the same year.

A former florist, McCarthy’s love and appreciation for horticulture influenced some of her most noteworthy work with the Park Board. She worked tirelessly to ensure that Bloedel Conservatory was completed as a Canadian Centennial project, and campaigned throughout the 1960s for part of the abandoned Shaughnessy Golf Course to become what is now known as VanDusen Botanical Garden. Once elected to the legislative assembly, she continued her fight to fund the garden and, in 1970, made the announcement that the province would provide $1 million to its development.

In her time as member of the legislative assembly for the Vancouver-Little Mountain constituency, she successfully lobbied provincial and federal governments to enable women to apply for mortgages without a male guarantor. Her appointment as the first female deputy premier in Canada paved the way for generations of women in provincial politics. As deputy premier, her portfolios included economic development, provincial secretary, human resources, social services and tourism, and she initiated the province’s bid to host Expo ’86.

Following McCarthy’s passing in 2017, the Park Board directed staff to identify an appropriate space to recognize her legacy. One of the non-family members involved in that five-year process was Jewish community member Mark Weintraub, Q.C., a partner at the law firm Clark Wilson. He spoke at the May 27 ceremony.

“I did not personally know Grace well,” he said, “but I have felt her presence almost my entire life and, therefore, I am gratified to be here for all of the British Columbians who may not have known her well but who were very much aware of her as an exemplary model of public and community service.”

Weintraub’s first encounter with McCarthy’s reputation “was in the 1960s,” he said, “when I would walk to school and pass the family home. Somehow I knew it was the McCarthy house. How I knew it was the McCarthy house I don’t really know – my parents must have pointed it out one day and I have no idea how they knew. But somehow as a young boy, I had absorbed that there was a very important woman living close to us and that whoever Grace was and whatever she did, my parents thought I should know about her.

“Fast-forward about 25 years, when I became involved in Jewish community advocacy, I had the opportunity to meet with her on several occasions on political issues of concern. It was during this time that I began to realize why Grace had this almost celebrity heroic aura around her that I had somehow absorbed as a young boy. With these few community encounters, I, in fact, learned that her reputation as a dynamic, forward-thinking, compassionate woman of extraordinary action was well-earned.

“I saw firsthand that Grace listened carefully to the Jewish community’s deep concerns about antisemitism and was seen as a strong community supporter, friend and advocate,” said Weintraub. “With passage of time it is very apparent to me that she was one of the modernization forces within the B.C. political system advancing equality and human rights. I became involved in this dedication project in part to show my gratitude to Grace for her unshakeable friendship with many members of the Jewish community; her dedication to public service; her trailblazing of gender equality and her enthusiastic embrace of new Canadians.”

McCarthy was in the Jewish Independent newspaper and its predecessor on numerous occasions – with respect to activities concerning, among others, Jewish National Fund, Pacific Region; Jewish Women International, B.C. chapter; and Lubavitch BC. She also was in the paper for the CH.I.L.D. Foundation, which she founded in 1995; the organization raises money for research funds to help children suffering from Crohn’s disease, ulcerative colitis and liver disorders. The Jewish Museum and Archives of British Columbia’s oral history project contains a 2011 interview with McCarthy.

Weintraub shared with the JI a letter from Monsignor Gregory Smith, pastor of Christ the Redeemer Parish in West Vancouver. It confirms that McCarthy’s impact extended beyond the secular and across religions. Smith, who attended the plaza dedication, commended Weintraub on his remarks and said, “In particular, I could not help but think that if I substitute ‘Catholic’ for ‘Jewish’ I could have delivered your text with equal conviction! Grace was a remarkable supporter of people of faith, and on many occasions she was also a great help to our church.”

“Grace modeled optimism and hope in the face of adversity and she was a rock,” said Weintraub at the dedication. “How fitting that we remember her on this hard plaza surface built on rock quarry and now so beautified.

“This plaza overlooking her beloved parks, her Shaughnessy home of many decades, the ocean and mountains – the highest point in the city – is so appropriate for one who achieved pinnacles and, as importantly, mentored the way for so many of us to achieve our best.”

– Jewish Independent, Vancouver Board of
Parks and Recreation, and Mark Weintraub