While the target audience for Sydney Finkelstein’s newest book, Superbosses: How Exceptional Bosses Master the Flow of Talent, is businesspeople, it is clear that his ideas carry well into many aspects of life, not just work, and not just business.

Finkelstein, who is a professor at the Tuck School of Business at Dartmouth College in Hanover, N.H., is originally from Montreal. He has authored 21 books and more than 80 academic articles.

“Pretty early on, I was interested in why people did what they did and in people who seem to have a lot of power and influence in society,” said Finkelstein. “I was actually very interested, and still am, in not just business leaders, but political leaders.”

Ten years ago, Finkelstein struck a note with his book Why Smart Executives Fail, and he was invited to give keynote speeches and to consult for several companies.

“Everybody pretty much had the same question, which was how to avoid getting into my sequel,” he said. “In the book, I talked about a lot of things you could do to avoid falling into the trap that led to failure but, over time, I came to realize that there was something else more important – the ability to generate and regenerate talent on a continuous basis. That’s the only way to survive and thrive in the long-term.”

After coming to this realization, Finkelstein set out to learn who possessed this ability. This is what led him to learn of those he came to call “superbosses.” 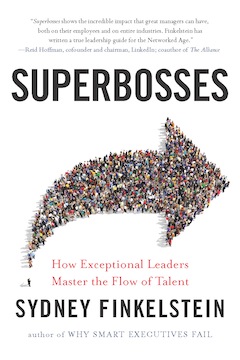 The Jewish Independent spoke with Finkelstein around the time of his March 8 talk and book signing at Concordia University in Montreal.

“The big difference was the ‘why smart executives fail’ leaders look at people around them – other managers and team members – as people to be used and exploited for their own purposes…. They didn’t really appreciate the fact that the people around them – team members – are actually probably the most important part of what you are doing, because they help you get better.”

Superbosses, on the other hand, wholly prioritized the idea of having great teams and great organizations of great people, understanding that this is the best way to succeed, he said. “The WSEF leaders didn’t understand that. So, that’s a gigantic difference in mindset – thinking about other people and what role they can play.

“Then, when you look at the details of how they run their businesses, there are many, many differences – from how they identify talent, to how they motivate people, how they develop teams, the role of vision and [of] inspiration.”

While most leaders, good or bad, carry with them a certain amount of ego due to their previous endeavors’ successes, Finkelstein said superbosses find ways to put that ego aside.

“This may be the best first thing for people to work on – having a degree of humility about yourself, your own accomplishments and your own personality even,” he said. “Humility doesn’t mean you’re afraid to take on challenges. It means you understand that there are other people who play a role and that you can’t let your ego run away with things.

“By the same token, listening is one of the most important managerial skills I’ve ever seen – the ability to really listen, to understand, not to critique. A lot of people are listening to find a flaw in their argument or to justify a point of view they already have. I’m talking about listening that’s designed to learn something. That’s a tremendous skill and mindset.”

Another important skill Finkelstein advised honing is open-mindedness, ranked highly with its close cousin, curiosity. These are attributes he regularly discusses with boards of directors and management teams.

“You need to have that curiosity about life, about what you’re doing,” he said. “When you have curiosity, you’re asking why a lot. Kids do that, but when we’re older, we don’t do that so much. You learn so much more by doing that.”

Courage is on the list, too – the kind of courage that challenges convention, and the ability to raise your voice when something is not going the way you think it should. “This doesn’t mean you’re going to win the argument or get your way,” said Finkelstein. “It’s about trying to improve the eventual outcome or situation you’re in.

“Many people often remain silent. They just nod their heads. As a result, they’re not engaged in what’s going on. Later, they spend their time complaining and back-biting, rather than being part of the solution. Sometimes, of course, managers or leaders create an environment where, if you challenge, you get punished, so it can be difficult, but I think courage is a critical factor.”

The next item on the list is accountability – recognizing you need to be responsible for your own actions and behavior, as well as instilling a sense of accountability in others.

“I think, by the way, that most people prefer not to be held personally accountable,” said Finkelstein. “I don’t think people should assume people would automatically be accountable. I think people enjoy it when it happens, but they don’t automatically do it. This is particularly relevant in volunteer organizations.

“Being a teacher, a nurturer of talent, is something anyone can do, no matter what their job is,” he continued. “You don’t have to be a famous CEO. You can be an average person doing whatever you’re doing. But, if you spend some time and energy acting to help others get better, often through teaching, sharing and listening … I think that’s a giant differentiator and extremely meaningful in people’s lives. If you have an impact in helping other people, it makes you feel good, too.

“Younger people, earlier in their career, who are ambitious, have high expectations, want to accomplish great things. How do you find people to work with, to work for? I talk a little about that in the book, but I also think that trying to work for someone who is more like a superboss, rather than less like one, is a great way to learn, develop and accelerate your career.”

As the book’s subtitle suggests, Finkelstein sees managing the flow of talent as one of the most important things for superbosses to do, and he segments this aspect into three categories.

“One is finding good people,” he said. “Everyone needs to hire when you’re growing, you need to hire and find people…. That’s the first stage in this flow of talent.

“The second stage, which not everyone engages in, is developing that talent, helping them get better. That’s managing the flow of that talent in a team/organization for a number of years.

“The third stage is managing the flow of talent sometimes even outside your own region, division or role in the company. Very few managers, leaders or bosses think a lot about … how they should manage people out of the organization. I’m talking about good and very good performers.

“The typical assumption among most leaders is to keep those people forever,” he said. “But, those who work for superbosses, people that really enhance their skills or have this vision, they won’t be satisfied with that small piece of pie. They want a bigger role themselves so, in fact, many of them will end up wanting to leave anyways. Managing the flow of talent should also consider this kind of radical or counterintuitive idea – managing people out of the company itself.”

Finkelstein said, “The best people know they will move around, look for those opportunities. If you know that will happen, the questions become how can you take advantage of that, how can you be strategic in that, how can you create a win-win out of that situation?’ That’s what superbosses do. They make a spinout business. One example from the book is the Hospital Corporation of America (HCA). The CEO used to create big opportunities for senior executives who were going to leave anyways. He would create a spinout company in a mental health clinic, surgical centre or what have you. That former team member would be given the opportunity to be CEO of that spinout business but, because you’re doing the spinout, you get to participate in a financial sense.”

To see where you sit on the superbosses scale, Finkelstein invites readers to visit superbosses.com and take a 10-12 question quiz.

“The quiz is because people find it interesting to see how they rank,” he said. “The book can help them get better.”