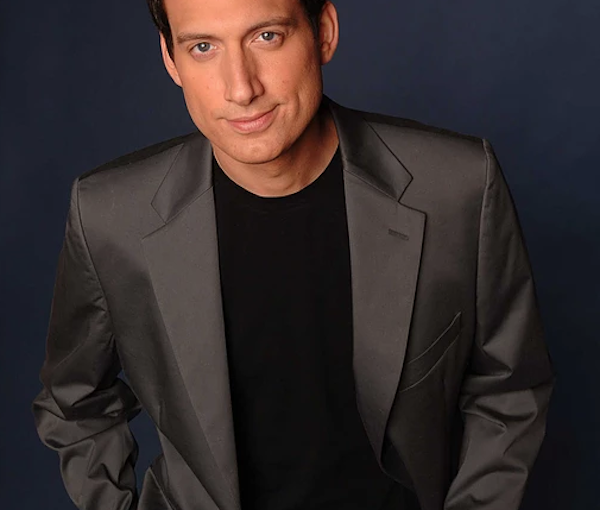 Elon Gold performs in Vancouver on April 14 at the JNF Negev Gala. (photo from elongold.com)

Comedian Elon Gold loves doing charity events, especially Jewish ones. The Independent caught him for a phone interview as he was on the road – with his family – to Las Vegas from Los Angeles to do gigs for the Adelson Education Campus and then the Israeli-American Coalition. On April 14, he will be in Vancouver to co-headline, with Ambassador Ron Prosor, the Jewish National Fund, Pacific Region, Negev Gala. The event raises funds for Sderot Animal-Assisted Therapy Centre.

“I feel like I’m doing a mitzvah by making my people laugh. And I’m also helping this cause that’s really important, and Israel is really important to me,” said Gold. “And we’re living in a highly antisemitic time, it’s dark out there, so anything I can do to bring light into our world and make my fellow Jew happy, I’m there for it.”

Gold’s resumé is impressive. He starred in the television series Stacked and In-Laws, had a recurring role on Bones and on The Dana Carvey Show. He guest starred just recently on HBO’s Crashing and, longer ago, on shows including Frasier and The Mentalist. He has appeared in films, his one-hour Netflix special, Elon Gold: Chosen and Taken, is available on Amazon and his show Elon Gold: Pro-Semite premièred at the Montreal Comedy Festival. He has made multiple appearances on The Tonight Show and his July 2018 segment on The Late Late Show With James Corden – how, like everyone else, Jews love sex, money and food, but just in a different order – has been watched and shared by countless people on the internet, as has his routine on why Jews shouldn’t have Christmas trees and so many others.

Despite all of his accomplishments and his years in the business, Gold still gets excited about his work, and he shared what he described as a “wow” moment, one of the best days of his life, almost immediately when talking with the JI.

“Yesterday,” he said, “I was filming a scene of Curb Your Enthusiasm with Larry David…. It was really, truly a dream come true.”

But Gold didn’t take his being hired by David as a sign that he had “made it.”

“The truth is, I have been a guy with lucky breaks and hard breaks for the last 20 years,” said Gold. “This is another achievement, and one that’s beyond anything I would dream of…. I’m gratified in the sense that I finally feel like I’m in a place, not where I’ve made it, but where I actually have fans, and my clips are viral and people are sharing my bits on Facebook, WhatsApp or whatever. I did the James Corden show and, again, that doesn’t mean I’ve arrived … but what’s cool to me is that I did that set and then everyone’s sharing it, especially Jews. My biggest fans are my people.”

It’s been a 25-year journey, said Gold of his career, “with all sorts of great highs, like yesterday, and huge lows, like having a sitcom that you pitched and created and started get canceled. There are so many lows, and then there is the daily rejection that is show business. And that’s why I’m so glad I’m a comedian and an actor. I get rejected all day in Hollywood at auditions, but then, at night, I’ll go to the Laugh Factory comedy club and I’ll have 300 people roaring, and that will validate [me] – I knew they were wrong! I knew I could do this. See, I’m funny. These people think so, at least.”

Gold said his resilience, his ability to keep trying, likely comes from stand-up. “Because stand-up is all about bombing and killing, and the killing is so worth it that even the terrible, dejected feeling of bombing [is manageable].”

As far as his career, he said, “I have no other choice. I don’t love doing anything else and I’m not good at anything else.”

Known for his impressions, he said, “I used to impersonate my teachers in eighth grade.” His goal wasn’t to ridicule people, he said, but to make even the teachers laugh.

He enjoyed making people laugh, and writing comedy. One of the first things he wrote, he said, was a Purim shpiel. “And I’ll never forget the feeling of having the entire high school laughing, and thinking, there has never been anything more gratifying than what I just did, I want to do this more. Everybody says it’s like a drug…. It’s so addictive. Once you get a taste of it, that’s it, you’re hooked. And very little can discourage a comedian [so much that they get] out of comedy; certainly not a bad set, because we all know that we all have them.”

A combination of things drives him.

“It’s probably disingenuous to say that I do this because I love to make others laugh,” he admitted. There is a selfish aspect to it, he said. While making people happy is a “key component” of why he does comedy, he said, “I also love everything about it… I love the process of having an observation and then writing it and tinkering with it and working on it. I love doing it and I love the fact that I have so much freedom in my days because I don’t have that nine-to-five job most people have…. I’m always working. At the same time, I’m always on vacation.”

Gold loves getting the laughs, and said that’s probably 70% of the reason he does comedy; the other 30% is making people happy.

“There is so much misery in the world,” he said, “to make people happy is a great thing, but it’s only a part of it.”

On the acting side, Gold said his favourite kind of acting is for sitcoms “with a live studio audience because you’re still getting the laugh but now you’re not looking at the audience and talking to them, you’re looking at your fellow actor … and, peripherally, you hear and see these people cracking up.”

The only “grueling part,” he said, is the memorizing “and the pressure of 200 people staring at you, saying, ‘You better know your lines, pal, because we’re all here and we all want to go home…. Acting is challenging, but it’s also just fun…. It’s fun to get into a character and just play.”

Gold, who is from the Bronx originally, recalled his first open-mic night at the Comic Strip Live in Manhattan; he was 16 years old. “Fortunately, I had beginner’s luck because I was doing impressions – my early act was all impressions – and impressions are like magic tricks, they just wow the audience.”

Despite being a touring comedian by university (he got a bachelor’s in economics at Boston U), it took years, he said, to develop his own voice, to figure out what he wanted to talk about and how to talk about it.

“I’m obsessed with Jewish stuff because I live such a Jewish life,” he said. “I’m an observant Jew, I keep Shabbos and all that stuff, keep kosher. So much of my life is in the Jewish world, I can’t help myself but to come up with observations about our traditions, our holidays, our rituals. A lot of what I talk about is what I live…. The other part of my life is being married, being a dad, so I talk about that.”

Gold and his wife, Sasha, have four kids, two sons and two daughters, ranging in age from 9 to 18. The couple is coming up to their 25th anniversary in June.

As he stopped to fill up his car with gas on the way to Vegas, he told the JI about why he likes performing at Jewish events, while simultaneously directing his kids to be quick about heading into the gas station, as they were running late.

“There are not a lot of comedians out there that will go that deep into the Jewish experience and, for me, there are not a lot of audiences I can share my Jewish experiences with,” he said. “I can’t do lulav and etrog jokes on James Corden…. At the same time, we’re raising money, we’re raising awareness for incredible organizations…. It’s all win-win for me – I’m raising money, I’m making money, I’m getting laughs, I’m getting to do material I don’t do anywhere else…. And I love Jewish audiences; I love connecting on more than just a human level…. We’re connecting about a shared experience that is almost indescribable to anyone else.”