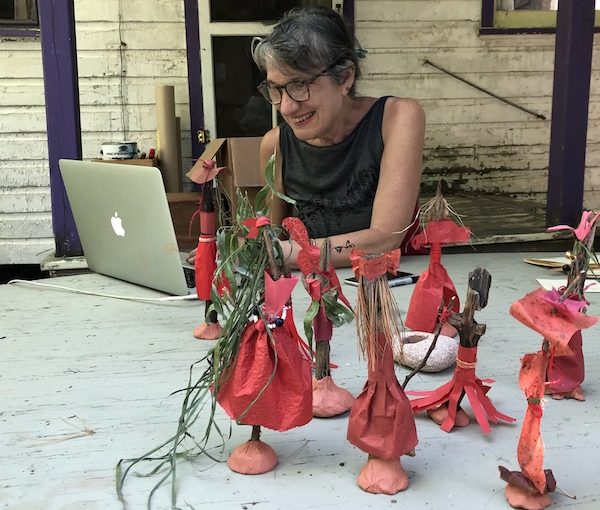 Tikkun olam, the imperative to repair the world in which we live, is a core influence of the project Grounds for Goodness Downtown Eastside: Adventures in Digital Community Art Making. Led by Toronto-based theatre designer and educator Ruth Howard, the residency is part of the Downtown Eastside Heart of the City Festival.

The festival runs Oct. 28 to Nov. 8, and Grounds for Goodness, which “explores why and how people sometimes do good things towards others,” takes place Oct. 30 to Nov. 12. It comprises participant and audience interactive story-sharing, art-making, workshops and an evolving gallery online, as well as Downtown Eastside window displays. The residency is co-produced by Jumblies Theatre and Arts and Vancouver Moving Theatre.

Howard – who has participated in the festival before (jewishindependent.ca/putting-heart-into-city) – is the founder of Jumblies. She said tikkun olam is an underlying motivator in all her work – “and one of this project’s explicit intents is to connect its themes and questions, my Jewish heritage as a second generation Holocaust survivor and my vocation a community-engaged artist.

“Community arts is predicated on the working belief that bringing people together across differences can foster commonality and understanding,” she explained. “And yet, growing up in the 1960s, as the child of a German Jewish refugee (my mother and family escaped to England in 1938) and an experimental psychologist, I was bred on evidence that groups of people tend to do atrocious things towards others, with goodness being individual heroic exceptions. I was told at a young age about [Stanley] Milgram’s electric shock experiments, and understood the link between such cautionary tales and attempts by survivors to explain the Holocaust. My own uncle – Henri Tajfel, both social psychologist and Holocaust survivor – coined the term ‘social identity theory.’

“Therefore, my attention was grabbed a few years ago when I read some books about the saving of Danish and Bulgarian Jewish populations during the Holocaust by citizens of those countries. The Danish story was slightly familiar to me and the Bulgarian one not at all. I have since become quite obsessed by these and other instances (for example, Albania, the Rosenstrasse protests) that run against the grain of my and other people’s common assumptions about human behaviour and ‘nature.’ I felt compelled to tell these stories and learn more about the reasons behind them. I started to investigate the notion of ‘social goodness’ from many angles: history, psychology, anthropology, philosophy, memory, folk tale, legend, theory.”

With the help of independent research and creation grants, Howard “gradually brought the project into the work of Jumblies, inviting and including the responses of diverse community participants and groups. Now, we have a broad and growing repertoire of stories with which to play.

“However,” she stressed, “it’s important to me to uphold the project’s origins in Jewish perspectives and histories, and my own Jewishness: a complicated mix of darkness, hope and urgency to understand how to cultivate grounds for goodness through never forgetting what can happen in its absence.”

In addition to being a composer for film, television, theatre and dance, van de Ven is a music facilitator and educator. He is also a clarinetist and has performed with the Flying Bulgar Klezmer Band, Chutzpah Ensemble, and Beyond the Pale. He has been involved in many Jumblies projects – as musical director, composer and/or performer. “Ruth and I have written several choral works together,” he told the Independent.

“To me, Jumblies is the embodiment of a music and art-making philosophy that believes the arts are there for everyone to create and not just for the well-trained elite,” he said. “Composers such as John Cage and Canada’s R. Murray Schafer talk about this in their writing and both were an early influence on my music education. Jumblies allows me to use my own skills and training to combine the efforts of trained and non-trained performers to create art, and specifically music, that serves the purpose of the moment, whether a stand-alone piece or something that supports a story being told. I think this work is important; it democratizes and decommodifies music-making and breaks down barriers to creation for community members who are otherwise shut out of the creative process. The myth that music-making is the sole purview of the highly skilled, and it is only worthwhile if it is commodified into a product to be consumed, is damaging to the whole idea of ‘homo ludens,’ the idea that a fundamental human attribute is the ability to play, invent and create.”

The community choir that Cooper directs embodies this concept of art being for everyone.

“The Gather Round Singers is an intergenerational community choir, made up of 30-plus mixed-ability, multi-aged singers, from across Toronto and beyond,” she said. “We exist within Jumblies Theatre, and so share their dedication to radical inclusivity and benefit from their experience in creating interdisciplinary work.”

Despite the challenges of COVID-19, the choir has been meeting weekly online since April, said Cooper, “to rehearse and perform new choral works designed or adapted for this new context” – that “[c]horal music is among the more challenging forms to adapt to online gathering, as video calling platforms such as Zoom are designed to reduce vocal overlap, and create latency that makes in-sync singing impossible.”

The Gather Round Singers will perform two new pieces for the opening of the DTES Vancouver residency, said Cooper – “one a world première by Martin van de Ven and one a work-in-progress by Arie Verheul van de Ven, both of which were developed this summer especially to be performed on Zoom. These are both part of Jumblies’ larger Grounds for Goodness project, which continues until a final presentation in June 2021, and will include several other new musical and choral pieces … and other composers (including Andrew Balfour, Christina Volpini and Cheldon Paterson).”

“Grounds for Goodness overall is a multi-year project that includes many partners, places and participants,” explained Howard. “It has been taking place through real-live and virtual activities for almost two years. There have been episodes in Nipissing First Nation (near North Bay, Ont.), Montreal, Brampton, the Ottawa Valley, Algoma Region (northern Ontario), and with various Toronto groups.… We have received funds to tour the project, which have now been adapted to allow for ‘virtual touring.’ The Vancouver iteration is the next big chapter in this project.”

For Grounds for Goodness Downtown Eastside, Martin van de Ven said, “we’ll be premièring a work called ‘Besa.’ ‘Besa’ is an Albanian Islamic concept about hospitality and the need to help and protect guests and those in need within and beyond your community.

“In Albania, during the Second World War (and Italian and then Nazi occupation), this meant that almost all Jewish people living and finding refuge in Albania were sheltered and hidden, and Albania ended up with a larger Jewish population at the end of the war than at the beginning. We created a work based on texts found in writings and interviews with Albanians – from the book Besa: Muslims who Saved Jews During WW II by Norman H. Gershman.

“The COVID-19 restrictions prevented us from developing this piece as we normally would,” he continued, “and so I composed a work that could be performed and rehearsed with everyone being online. It involved researching the technology, experimenting with Zoom meetings and audio programs, as well as writing music that allowed for enough flexibility to deal with internet latency. For our Vancouver residency, we will be presenting this work and sharing our experience of creating an artwork to be performed online with members of the Vancouver art community.”

Van de Ven started music lessons when he was 6 years old – on recorder. “In elementary school,” he said, “my friends and I decided we wanted to form a circus. As the only one in the group with musical training, I was charged with writing the theme for the circus band. I dutifully started writing down half notes and quarter notes on paper and tried to play them on the recorder. The method worked fine but I soon realized I would need some additional training if I wanted it to sound good.

“I ended up with a musical education partially shaped by my father’s interest and taste for very modern classical and jazz music and eventually formal training at university,” he said. “In my late teens, I realized that my interest in science and engineering paled compared to the excitement I felt for a live performance, whether as an audience member or as a performer.”

In university, in addition to his formal training, van de Ven was involved in various jazz programs and, eventually, studied and performed in free improv ensembles. He also did a short stint in Europe, studying early computer music in electronic sound synthesis.

“Klezmer music has a history deeply rooted in East European and Middle Eastern music traditions. As a clarinetist,” he said, “it provided for me a wonderful vehicle to not only deeply emerge myself into a culture other than my own but also perform a lead role playing in a band.”

For her part, Cooper has loved choral singing her whole life. “And I bring this love to my own work,” she said, “while having always believed that bringing together community arts and choral singing requires a flexibility and a softening of our understanding of the boundaries of what ‘choral music’ can be – this is something that I have always been creatively driven by. In these times, I’m learning a lot more about how far this can go.

“Sometimes, turning things on their head can be revealing of new approaches, considerations or perspectives,” she said. “For example, one young woman who has sung with the choir for many years, said to me the other day: ‘In rehearsal, I always sit in the back row, so I only see the backs of people’s heads. I like on Zoom that I can see the faces of everyone I’m singing and performing with.’ Another choir member told me that she feels more confident and motivated to practise when she has her microphone off and is alone in her room following along – this confidence comes through strikingly in the recordings she shared with me for one of our digital projects. In these ways, sometimes, working online has revealed the limitations of our previously established norms for singing in-person. I think often now about how, whenever we can safely be back together, we might incorporate these learnings.

“Which is not to gloss over any of the challenges of meeting online,” stressed Cooper. “I think I can speak for at least the majority of the choir when I say we all immensely miss singing together – in sync, in harmony, in rhythm. And a digital space, even though full of many possibilities, is also full of boundaries and obstacles to folks joining in, especially those experiencing more precarious housing or financial insecurity. Our team worked closely all summer with members of the choir community to bridge this gap, purchasing and delivering internet-enabled devices to choir members and providing remote and in-person (socially distanced) trainings and trouble-shooting.” They did so with funding from several sources, notably the Toronto Foundation.

“Another part of my work has often included event management and digital design and, in the new reality of virtual art-making, these two often come together in interesting ways,” Cooper added. “I’m delighted to be designing a new interactive website for Grounds for Goodness at the DTES Heart of the City Festival, that will act as an online evolving gallery, showcasing new work created through the community workshops and acting as the container and guide for the culminating virtual event.”