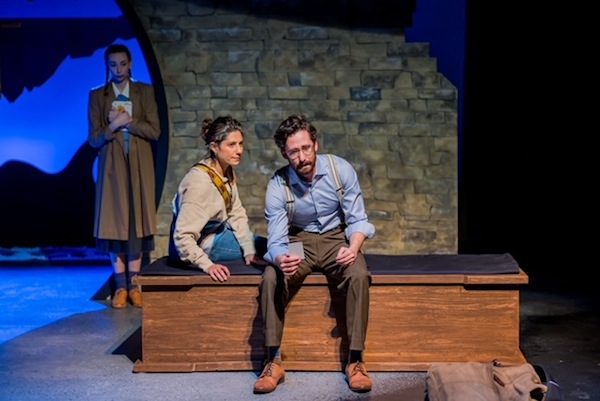 One does not often get a chance to see a world première of a play in Vancouver. After writing my preview article on Courage Now in the last edition of the Independent, I was looking forward with great anticipation to seeing the final product. I was not disappointed.

It is a difficult story to tell but it is done with such sensitivity and style that I highly recommend seeing it. As a child of a Holocaust survivor, any story of courage and heroism arising out of that era resonates with me – this one in particular had me in tears.

From the moment you walk into the intimate Firehall Arts Centre theatre, you know you are about to see something special. The set is austere – a desk, a bench, a lattice-like trellis, an empty wall-mounted picture frame – with a pagoda-style roof and an archway backlit with vibrant colours. (Kudos to set designer Kimira Reddy and lighting designer Itai Erdal.)

To summarize the backstory, Chiune Sugihara, the Japanese consul in Kaunas, Lithuania, in 1940, against the instructions of his government, issued more than 2,300 handwritten visas in a 30-day period to save Jews trying to leave Poland and Lithuania. He was supported in his decision by his wife, Yukiko, who knew the price the family would pay for going against the government edicts. And a price was paid: career loss, humiliation and Sugihara’s self-imposed postwar exile to Russia for 16 years.

The play follows what appear to be two separate narratives that intersect in an unexpected way in the final scene. In 1986, Yukiko (playwright Manami Hara) is forced to revisit wartime when a visitor from Vancouver, Margaret Grant, born Shayna Schneider (Advah Soudack), comes for answers from Sugihara as to what happened to her father after he put her on a train out of Kaunas when she was 13 years old. She has resented her father through the years, feeling abandoned and betrayed by his sending her off alone; she is also coping with a difficult divorce and her own daughter’s hatred. Sugihara has recently died, however, and Margaret must turn to Yukiko for answers instead.

The play opens with Yukiko waking from a dream where she is visited by the ghost of her husband. Then Margaret enters her garden. She tells Yukiko, “I am a Sugihara Jew, Sempo saved my life.” The play then moves through a series of memory flashbacks, as the audience is transported back and forth between 1940 Kaunas and 1986 Japan.

Katherine Matlashewski plays the teenage Shayna and Amitai Marmorstein plays her father, Jankl. Jankl visits Sugihara (Ryota Kaneko) to plead for visas on behalf of the thousands of Jews who have been lining up every day outside the consul’s office. In a touching and poignant scene, something as simple as a shared cup of coffee gives you a sense of the integrity and honour of these two men as they strive to do the right thing. Kaneko plays Sugihara with a quiet intensity and Marmorstein portrays Jankl with dignity. The scene where he sees Shayna off at the train station is heartbreaking – he watches his only child (his “little mouse,” as he calls her) walk away from him, tattered suitcase in hand, in a fog of smoke and the eerie sound of a train whistle in the distance.

In many ways, the journeys of the two women are love stories. Yukiko grapples with the grief of losing her husband, moving through the stages towards acceptance, and Margaret comes to the realization that it was her father’s love that put her on that train in 1940. Both characters become conduits for the other’s catharsis. When Yukiko shares her husband’s journal from that time, Margaret says, “My father lives in that journal.”

All five of the actors do credit to their roles in this ensemble piece but Hara and Soudack’s performances are sublime. The play is particularly effective when all five actors are on stage at the same time in the memory flashback vignettes.

My one criticism is that there is quite a bit of Japanese dialogue between Kaneko and Hara and it would have been helpful to have either a reader board translating or a program insert with translations.

Hara has penned a lovely tribute to Sugihara and I, for one, am grateful to her for her work.

Courage Now is at the Firehall until Dec. 4. For tickets, visit firehallartscentre.ca.