The two-state solution was one of the most talked about issues in the conflict between Israelis and Palestinians. Not everyone is talking about a two-state solution these days, however. As a regular reader of Jerusalem Post columnist Caroline Glick, I was interested to read her most recent book, The Israeli Solution (Crown Forum, 2014), in which she introduces her vision of a one-state plan, and challenges the assumptions two-staters make about the demographic threats that are supposed to be inherent in a one-state future. Glick also considers what might be the international response to such a plan, as well as the risks and benefits to all the players. 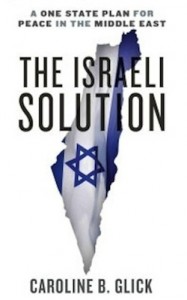 In her preface, Glick makes it clear that “the time has come for American policy makers to reconsider their devotion to the two-state formula and consider an alternative policy that makes sense both for the United States and for the Middle East.”

She presents a history of Israel, then provides a look at both Yasser Arafat and current Palestinian Authority President Mahmoud Abbas, as well as reviews the history of Hamas. She states her incredulity that Western leaders acknowledge Hamas as a terrorist organization but fail to see that Hamas is the same as Arafat, Abbas and others who support terrorism and advance the cause of Israel’s destruction.

She analyzes Israel’s national rights to Judea and Samaria and the term “West Bank,” coined by the Jordanians, “who instigated their occupation of the areas in order to ground their claim to sovereignty on an intuited but nonexistent political link between the west bank of the Jordan River and the east bank of the river which was Jordan.”

In conclusion, she makes her points very clear that “the Palestinian conflict with Israel is a function of the larger Arab and Islamic world’s refusal to accept that Israel has a right to exist.” The Arab states exploit their politics and foreign policies as a means to coerce the Americans into taking actions to appease them, she argues.

“The United States has a paramount national security interest in ensuring the military strength and social cohesion of the Jewish state,” writes Glick. Israel is America’s only remaining ally in the Middle East, and in her comparison of the Obama and Bush administrations’ policy speeches, Glick finds them “substantially indistinguishable.”

An extensive bibliography and notes closes the book.