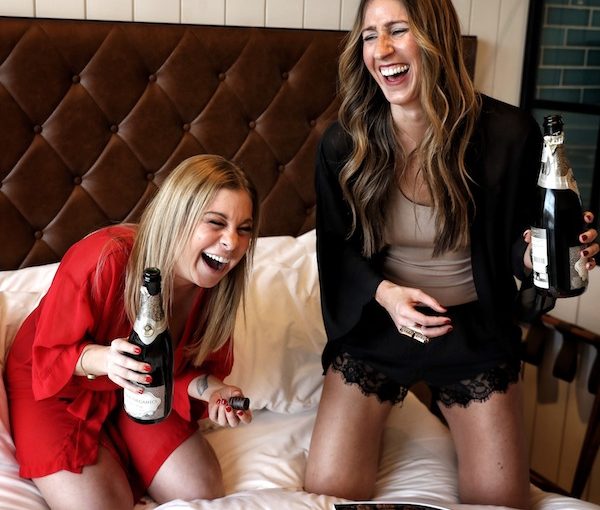 Girls Gotta Eat celebrates its first anniversary this month, and Greenberg and Hesseltine will be in Vancouver for that milestone. The pair has two soldout performances at JFL NorthWest, which runs Feb. 14-23 (jflnorthwest.com). They were scheduled to do just one show initially, and the demand would have sold out a third, no doubt, and probably even a fourth. On Instagram, Girls Gotta Eat has garnered more than 69,900 followers in less than a year. (By the time you’re reading this article, that number will likely be more than 71,000, as the account gained 300-plus new followers in the space of two days last week.)

In addition to Girls Gotta Eat, Greenberg and Hesseltine each have other ventures on various platforms, including websites, Twitter and Facebook, but Instagram is where their celebrity status is most remarkable. At press time, Greenberg’s One Hungry Jew had more than 350,000 followers on Instagram; Hesseltine’s Bros Being Basic, more than 915,000, and her Fashion Dads, another 186,000. It is no wonder that a good chunk of time on the Girls Gotta Eat podcast is spent promoting advertisers’ products, mainly cosmetics and fashion. These women have worked hard to secure an enviable target market – their 30-something peers who have money to spend.

While Girls Gotta Eat generally focuses on one topic or guest, Greenberg and Hesseltine try to cover a range of topics and have different guests for the live version, as well as make the show an interactive experience for the audience.

“We typically try to have a guest that has already been on the podcast,” Greenberg told the Independent in a recent phone interview from Los Angeles, where she and Hesseltine were performing.

“It’s rare,” she said, “that we go to a new city and invite somebody we’ve never had on the show. Just because our audience is so invested in the show and they love it, it’s so exciting for them to be able to also see another person that was on the show.”

The weekly podcast now averages well over an hour. In its first several months, it was about 45 minutes, the approximate length of a commute to work, said Greenberg.

“As we had more and more guests, the show just became really fun. We want guests to feel like they can cover a range of topics and we don’t want to truncate the show, something that’s great,” she explained. “We don’t want to hold ourselves to 45 minutes if it’s great content, so it’s just gotten a little longer. There was no day where we woke up and said, let’s do an hour-and-a-half. So, it just depends on the guests; some episodes are going to be 45, some are going to be an hour-and-a-half, we’ll see when the guests come in.”

For Greenberg, the podcast was a huge departure from what she had been doing before.

“I’ve worked in restaurants, I went to culinary school and then I really worked in tech startups for a long time,” she said.

“She is a comedian herself and she really wanted to do a show about dating and relationships, and wanted to find somebody that would be open and honest about their own lives and also could be funny,” said Greenberg. “She and I met on a press trip because we both have very large Instagram influencer accounts, and we just really hit it off. We had a great time with each other, we became friends over the course of a few months, and then she asked me if I’d be interested in doing this.”

As soon as the idea came up, said Greenberg, “I decided, and she decided with me, that it wasn’t going to be a hobby or a side project, this could be what we do. So, we focused on it as a business: we built a website, we had professional photos taken, we devised a way to market this. From Day 1, there was definitely a strategy of let’s make this a business, let’s expand it.”

Greenberg had already monetized her food blog, One Hungry Jew, by doing ads for brands. “For example, a company like American Express will come to me if they’re looking to attract a younger audience that has money and they’ll say, OK, we want to create a campaign that is designed to encourage people to use our AmEx Travel and they’ll give me an idea of what they’re looking for and, obviously, a budget, a price, and it can be something like, hey, we want to encourage people to sign locally, so go to a restaurant, take a photo of yourself at the restaurant, write a caption, and they pay me for something like that. It’s clearly an ad, it says ad. That’s how, personally, I make money through social media.”

One Hungry Jew started “as a silly hobby,” said Greenberg. “I would never purposely have named a business One Hungry Jew…. I’ve always enjoyed food, I’d always worked in food, and I was in the tech startup world and I didn’t have much of a creative outlet, so I started taking photos of food with my cellphone. It’s something I always spent money on anyways, it’s what I enjoyed, and I just put them on Instagram because I wanted somewhere to put the photos. It’s just as simple as that.

“There weren’t a lot of food blogs back then…. I was one of the earlier people that started posting continuously. I had really good content, and it was really ‘right place, right time.’ It was certainly a time in the world where marketing and PR were shifting heavily to social media…. And I started getting invited to all these places for free, for a free meal in exchange for a photo.”

Working at Amazon at the time, Greenberg said she was splitting her focus between her job and the social media account. “I was obviously doing a bad job of both of them and I had to make a decision, so I chose. I left my job two-and-a-half years ago to pursue this full time and I worked really hard. I reached out to every single PR and advertising agency in the United States. I introduced myself, I said this is what I do, this is what makes me unique, I’d love to find time to meet. So, just like the podcast, I tried to make it into a business as opposed to a silly hobby.”

Though her parents divorced when she was 4 years old, she said, “I have an incredibly supportive family from both sides.”

She could always talk about sex with her parents, and said her mom is a psychologist, so “we’ve always explored my feelings.”

“My mom bought me a book about puberty when I was like 11,” said Greenberg. “She wanted me to understand my body and what was happening.”

Nonetheless, she admitted to being a little nervous when she and Hesseltine started the podcast, as the pair does talk openly about their sex lives.

“It was a real struggle and a real choice that I wrestled with, how much do I talk about myself and how open am I going to be? And we both, Ashley and I, made the decision that, if we’re going to put ourselves in a public light, then we have to be honest and open about things in our life, and we both really are. And I think that’s what makes our show really good, is that people really feel like they know us, they really feel like they understand our pitfalls and our successes.”

Over the course of the year, Greenberg and Hesseltine have interviewed a wide variety of people. “We’ve had the founder of Hinge, which is a dating app, on the show; we’ve had a sex therapist; we’ve had a psychotherapist; we’ve had matchmakers; we’ve had comedians, actors and artists and all these different people. And everybody brings such a different, unique view of their own life and other people’s lives, and I feel so lucky to have amassed this huge knowledge of dating and what other people go through,” said Greenberg.

The podcast, she said, has “helped me be more calm and not so emotional, not take everything personally all the time. It’s helped me to realize that people are people and they make mistakes…. And I think that lots of people are looking for love and, just because you’re not the person they fall in love with, it’s not insulting, it’s not personal.

“It’s helped me to relax a little bit and be happy with my own life and realize that I should do other things besides focus on dating, which is funny because I do a show about dating. But, the advice I always give girls is focus on your job, focus on hobbies and friends and family and all these other things that bring so much joy your life, and that can be really fulfilling. And love will come and dating will come. And, if you’re a more whole person, it allows you to let in love in a really beautiful way.”