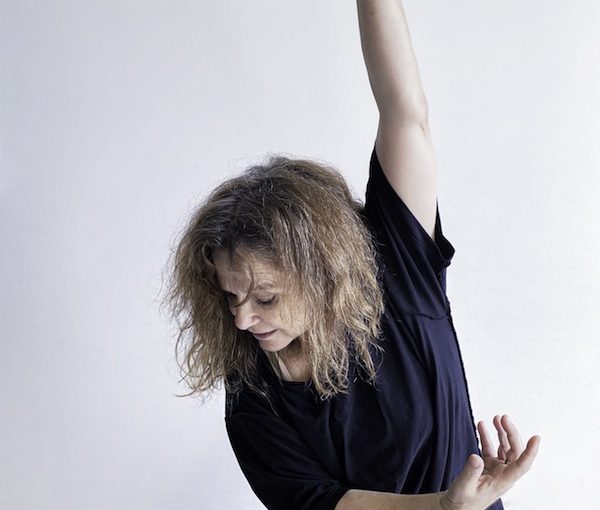 Mary-Louise Albert returns to the stage Nov. 19-21 in a new work by choreographer Serge Bennathan. (photo by Maxx Berkowitz)

The JI last spoke to Albert as she was moving on from Chutzpah! to other endeavours (jewishindependent.ca/bidding-adieu-to-chutzpah). In that interview last year, Albert said, “At 64, I still have a bit of ‘oomph’ left to pursue.”

“The ‘oomph’ related to centring work and artistry, in this next journey of mine, on dance and having the energy and focus to do it well,” Albert said when the JI caught up with her in anticipation of the upcoming show. “This next phase of my working life includes not only personal dance creation and performance projects like this one, but, as well, developing new Canadian and international professional contemporary dance through the B.C. Movement Arts Society, which I co-founded and direct, that will take place in remote and rural areas of B.C. We have received the very good news of confirmed provincial and federal funding and our first series starts late spring to December 2021.

“The Solo Dances/Past into Present project was developed over the past two years. The three solos being presented were created and performed during the last six years of my 20-year professional dance career, when I was between 39 and 45 years old. Because they were created during this latter period of my dancing career, when I stopped dancing, they stopped with me. I was never really interested in choreographing so, when I stopped dancing, I didn’t look back. I was ready and wanted to head into the next chapter of my working life, which involved business school and ended with directing the Chutzpah! Festival and Norman and Annette Rothstein Theatre for 15 years. We, the choreographers and myself, were all in our 40s and older and everyone moved on.

“But,” she added, “in the back of my mind, over these past years, I knew it was not right to let these beautiful dances end with me. I felt like there was ‘a little something’ still missing from this very enjoyable period of my career as a solo-commissioning dancer. A sense that something was not quite complete. It became clear that I needed to pass on the solos to this generation of outstanding female dancers and support their growth with performing options by way of building their solo repertoire. I received personal financial support from the Canada Council and BC Arts Council and this multilayered project of artistic sharing that brings two generations of dance artists together in the reconstruction of Canadian contemporary choreography began!”

“The solos have not been performed since 2001 and have never been remounted and reworked,” said Albert. “As a dance professional, I feel strongly that it is important to revisit these eclectic and beautifully crafted solos and put them back in repertoire with Canadian (B.C.-based/-born/-raised) dancers who have the versatility and desire to further develop the works, enjoy and share.

“Working so intimately with Allen Kaeja, Tedd Robinson and Peter Bingham many years ago brought a level of understanding as a solo performer that I had not experienced before in such depth,” she said. “As people, they all had/have a wonderful down-to-earth approach to themselves and their work and this led to a generosity and nonjudgmental approach to their creative process with me.”

Albert said the three solos “are all very different and timeless.” She described oLOS as “a deeply intuitive and somewhat mysterious work that transports performer and audience on an inquisitive journey, via the nature-walking and naïve love of [Gustav] Mahler’s Songs of a Wayfarer”; Woman Walking (away) as “a journey of one, arriving or leaving, listening to memory that is gently propelling what is next for her in an exploration of a complex yet personal quest”; and Trace Elements “wishes that this work of memory of persecution was just a source of history uncovered, but the dance is as relevant today with the growth of fascism and antisemitism as it was 21 years ago when it was created.”

In addition to remounting these works with other soloists, Albert herself will be performing the première of the first phase of a new solo work, Empreintes (which means fingerprints), commissioned from Serge Bennathan.

“At the age of 65, I’m going back on stage after a 19-year hiatus. I am still a bit dumbstruck by this,” said Albert, “and will be honest that I still often find myself mentally whispering WTF? But it is part of this new dance journey of mine as a senior citizen. I’ve never shied away from challenges and listening to my soul. There are many dance artists still performing at this age but most have never stopped. This is certainly a special experience, with its range of physical and emotional exploration, to be coming back to it at the age of 65.”

Bennathan, she said, “is a profound dance artist and is a beautiful painter and poet, as well. This new work explores the layers of artistry, physical trust and depth of reflection that a new stage in life, which I am embarking on, opens up. Serge is interested in the artist in me that is now, and the work reflects this…. The simplicity, strength and internal depth of the work, and the trust we have in each other, is quite simply a gift.”

In creating a commissioned work, Bennathan said, “The process always starts by trying to feel the energy of the dancer, then trying to discover what is just behind, what is the essence of why the artist desires to do such a work. Then, once together in the studio, if I can reduce the process to one word it would be ‘listening.’ That is the most important, to be listening to the inner self of each other to create a dynamic.”

He said “the idea of Albert passing on works created for her by powerful creators to magnificent dancers is fantastic. What a beautiful and creative way to feed the texture of a community in all its dimensions.”

“I feel that Mary-Louise’s foresight and inspiration to reenvision her past solos with the original choreographers and giving them, if wanted, the freedom to also reimagine the solos on these three mid-career dancers, was brilliant,” agreed Kaeja. “Her project intrinsically melds past with present in a generational sharing for all of us involved.”

For Trace Elements, which “deals with present and past antisemitism and cultural intolerance,” Kaeja said Margolick brings “not only her natural Jewish genealogy, but her depth of self, range of talent and profound and thoughtful life experience into this creative process…. I love that Mary-Louise has also invited Serge to choreograph a new solo for her – created specifically for who she is now as an individual, dancer, creator, innovator, curator and powerhouse – is profound.”

For Kaeja, creating a commissioned work centres around the person commissioning it. “My process is called ‘structured innovations,’ whereas I create a series of parameters that are clearly defined in physicality, intent and quality and texture of the movement,” he said. “With these boundaries, the dancer begins to create movement vocabularies and physical ideas. I then invite variations to the movement suggestions, redefine these in many ways and finally create the final choreography. I have always credited the dancers as ‘created with and performed by.’”

The creative process “is different with each solo,” said Bingham. “It depends partially on what the dancer is used to. I would say that it is always collaborative and research-oriented. The search is to find a language, both verbal and physical, that becomes our focus. I stress that the search must be mutually creative, an exchange. We try physical ideas and curiosities until the piece begins to reveal itself. In short, it becomes a product of our relationship.”

Similarly, Robinson works closely with the dancers involved. “When commissioned,” he said, “I assess the room (the space) and performer (who will move in the space). I start with basic concepts that I have developed, steps that sort of help us to get to know one another. As I see how the performer(s) interpret what I show or say, then I am better able to assess the space we will cover, the space of the creation and the space that the performer will need to inhabit. From there, we work together to create.”

With regards to the piece he created with Albert, Robinson said, “It was a more technical solo than I might normally do, because Mary-Louise likes to move and move big, so that is what we incorporated, plus the small and detailed work that I often use. I also worked on some bigger dramatics and that attracted me. I liked to lip sync when I was younger, so I feel that we lip synced with our total body for this work of Mahler.”

The planning and creation process of Solo Dances/Past into Present began and was completed before COVID-19, except for her solo with Bennathan, said Albert. “There have been challenges,” she said, “as the dancers have gone back to the solos, needing studio space to rehearse for this show during the pandemic. Serge and I worked mainly in Sointula, which has an inherently blissful feel to it (and lots of humpback whales!) so it made creating during COVID easier. We also are working at the Dance Centre, as are the other dancers, which has been excellent.”

The Dance Centre has COVD-19 protocols in place. “Executive director Mirna Zagar and the entire Dance Centre staff are working tirelessly, making it possible on so many levels for artists to be able to get back into the studio and on stage and be safe,” said Albert, who also gave “a big shout out” to technical and lighting director Mimi Abrahams. “We have worked together now for over 10 years and she is truly the unsung hero that makes it all happen,” said Albert. “Her calmness and clear head gives us a grounded base as we gear up to perform in the middle of a pandemic.”