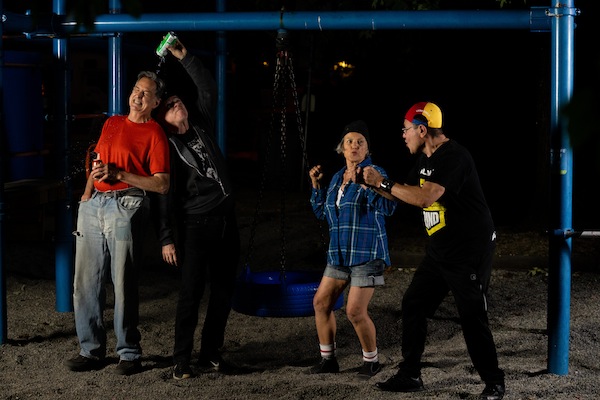 Left to right: Stephen Aberle, David Bloom, Suzanne Ristic and Gustavo Fabres are among the cast of Western Gold Theatre’s production of Seventeen, which opens Nov. 4. (photo by Javier Sotres)

None of us can go back in time and relive – or revise – our lives. But Matthew Whittet’s play Seventeen, which opens Nov. 4 at PAL Studio Theatre, offers audiences an idea of what that journey might look and feel like, with veteran stage actors playing the roles of present-day teenagers. Two of those actors are members of the Jewish community and they spoke with the Independent about some of the memories the show has roused.

Stephen Aberle plays the character of Tom, and David Bloom the part of Mike, two of the “kids” hanging out at a school playground after the end of the last day of school. One description of the play states, “It is the casting that gives the play its original twist. Older actors bring to it their own life experience and invest it with an extra layer of hope and sadness, striking the ideal balance between imitation of the freewheeling exuberance of youth and intimations of the future that faces these carousing teens.”

“There’s no improv in the show, but we are – with the playwright’s permission – adjusting some of the vocabulary,” explained Aberle. “The play was written and first performed in Australia and subsequently adapted for a British production, and now we’re readapting it to set it in East Van.

“It’s written to be performed by senior actors, with the stipulation that the company engage a youth advisory council of teenaged consultants,” he continued. “The three young folx Western Gold has found have been invaluable in helping us old codgers get into the bodies and minds and culture of being teenagers in 2022, working with us on everything from cussing and slang to clothing choices, hairstyles, posture and movement – and how to hold our phones.

“We’ve all of us been 17 … however many decades ago, and I think we all bring our memories of those days to our work. I know I’m personally finding lots of moments that snap me right back to the heady, emotionally buffeting, thrilling, infuriating days of high school: understandings, misunderstandings, love requited or unrequited, and nights in parks with like-minded friends in various altered states.”

“This show has me thinking a lot about my two closest male friends from high school,” said Bloom. “With both of them, the friendship came with spikes. One was weirdly competitive with his close friends and the other had a sharpshooter’s ability to be acutely nasty – and his nastiness usually contained a precise awareness of your greatest weaknesses and insecurities. It was like you had to keep proving your love by putting up with some really abrasive behaviour. They were also both brilliant and witty and incredibly fun to be around. I feel like I’m channeling a lot of their teenage bravado in my performance as Mike, as well as my own teenage (and continuing) insecurities and often spectacularly inappropriate behaviour. Pain and love come out in weird ways in this show, and that feels really human to me.”

Bloom said he’s known several people involved in the production for decades. “I first worked with Stephen Aberle on a touring kids show when I was 15 or 16, 1976ish,” he said. “There’s an ease and generosity in this cast of pros that makes going to work a real pleasure.”

As interesting and fun as recalling the teen years may be, Aberle said he’d probably decline any opportunity to be so young again.

“Leave youth to the young and let us silverbacks go to our deserved rest and make way for the next cohort,” he said.

On a more serious level, he shared a meditation by Rabbi Chaim Stern from the old Reform Gates of Repentance Machzor (High Holiday prayerbook).

“If some messenger were to come to us with the offer that death should be overthrown, but with the one inseparable condition that birth should also cease; if the existing generation were given the chance to live forever, but on the clear understanding that never again would there be a child, or a youth, or first love, never again new persons with new hopes, new ideas, new achievements; ourselves for always and never any others – could the answer be in doubt?” Aberle quoted.

The meditation includes the plea for divine help “to fulfil the promise that is in each of us, and so to conduct ourselves that, generations hence, it will be true to say of us: the world is better because, for a brief space, they lived in it.”