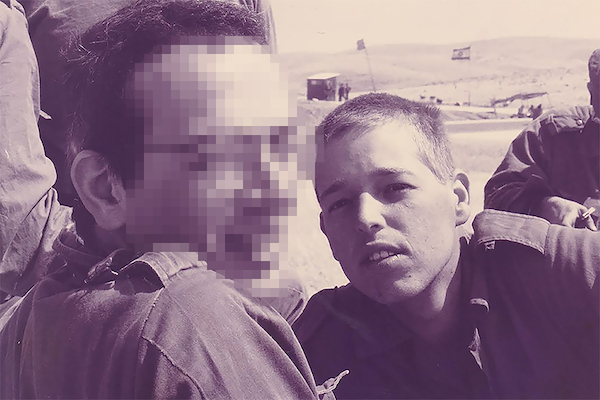 Soldiers of Tomorrow, about Itai Erdal’s experiences in the Israeli army, is at the Roundhouse Feb. 3-5. (photo from the Elbow Theatre)

“I know that this play will piss off a lot of people on both sides of the conflict, but I welcome the controversy. I am taking some strong stances and talking about some explosive subject matters (pun intended) so, if it wasn’t going to piss people off, then I probably didn’t do my job properly,” Itai Erdal told the Independent. “I think it’s good to challenge people and I welcome the discussion that this play will generate.”

Erdal was talking about Soldiers of Tomorrow, which he wrote with Colleen Murphy. The play is part of this year’s PuSh International Performing Arts Festival, and sees its world première Feb. 3-5 at Roundhouse Performance Centre.

Presented by the Elbow Theatre and PuSh, Soldiers of Tomorrow is directed by Anita Rochon and performed by Erdal with Syrian musician Emad Armoush.

“When I was a kid growing up in Israel, peace seemed inevitable – it was just a matter of time, there were countless songs about the day peace will arrive. The adults would always say, ‘By the time you grow up, we won’t need an army anymore.’ No one says that today,” writes Erdal on his website. “Most Israelis accept that their children will be soldiers. One day, when my nephew was 8, he came home from school with an empty box to fill with stuff to send to soldiers on the front line. Inside the box his teacher had written: ‘To the soldiers of today from the soldiers of tomorrow.’”

This experience inspired the play. While fictional, it is about real events that happened to Erdal during his time in the Israel Defence Forces in the early 1990s.

“I served in the army for three years and as a combatant soldier,” said Erdal. “I would have had to be in the reserves until the age of 45, which I didn’t want to do. I was in Jerusalem during all the suicide bombings in the ’90s and my reluctance to continue to be a soldier and my exhaustion of the political situation definitely contributed to my decision to immigrate to Vancouver.”

Erdal has made his mark here in many ways, including as an award-winning playwright, performer and lighting designer. He created the Elbow Theatre in 2012 “to confront urgent social and political issues.” Soldiers of Tomorrow is its sixth production. The PR blurb notes that, in it, Erdal “relates his actions in the army, exploring his personal culpability in the face of complex geopolitical forces in his former country – a place that he loves ‘with a broken heart.’”

“I pitched the idea for this play to Colleen Murphy in 2018 when we were working together in Stratford,” Erdal told the Independent. “We met a few times that year, but it really took off when the pandemic started. For almost two years, Colleen and I would meet on Zoom every Monday and Thursday for two hours. It was really great to have a project during the lockdown, it kept me sane.”

Although it is a one-man play, Armoush will also be on stage with Erdal, performing the music live. As to how he connected with Armoush, Erdal said, “I was looking for a Palestinian musician but there aren’t many of them in Vancouver and Emad was highly recommended by my Israeli musician friends.”

About the timing, Erdal explained, “During my lifetime, the situation for Palestinians has only gotten worse, it never gets better. Israel recently formed the most extreme right-wing government in its history, with several openly racist and homophobic ministers. Many Israelis and Palestinians are bracing themselves for the worst. Unfortunately, this play is more relevant than ever.”

He is not concerned about how Jews in general or Israelis specifically will be perceived by non-Jewish people who see the play.

“I am a very proud Jew and, even though I criticize the state of Israel, I do so because I love it, and I think that love is clear in the play,” said Erdal, who shared the following quote from the play: “I am aware that this is a topic that intimidates many Canadians. I’ve seen the glazed look in your eyes. I’ve had many people ask me to explain the conflict to them and, after one minute, they are searching for the exit. I’ve also seen many people twist themselves into pretzels in order not to take sides because they were concerned about appearing antisemitic. I hope by the time you leave here, you’ll be able to criticize Israel without worrying about appearing antisemitic.”

The PuSh International Performing Arts Festival runs Jan. 19-Feb. 5. It features 20 original works – theatre, dance, music, multimedia and circus – from 12 countries and includes six world premières, one North American debut, six Canadian and two Western Canadian openings and one Vancouver première. Single tickets start at $34 in-person, $25 online, plus there are pay-what-you-can and free events; passes, which offer a discount and other perks, are available for both in-person and digital shows. Visit pushfestival.ca or call 604-449-6000.