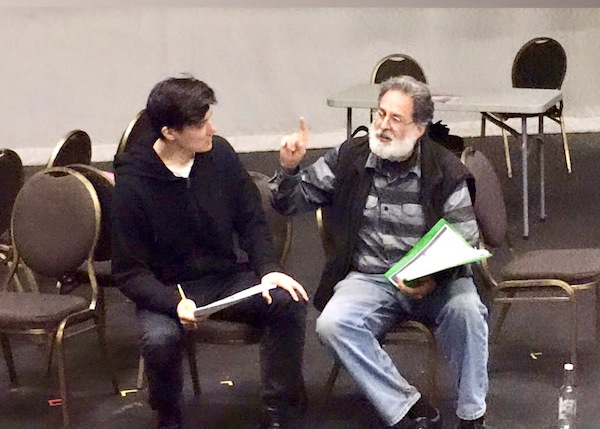 Slamming Door Artist Collective presents The Sea at Jericho Arts Centre until May 19. It opened last night, May 2.

Director Tamara McCarthy told the Independent that she had seen a production of The Sea at the Shaw Festival in 2014 “and was deeply struck by the complex poetry and stitch-ripping humour, all playing out within a beautiful tragedy.

“There are many current resonances, from Trump to Brexit,” she said. “Interestingly, The Sea debuted in 1973, the same year Britain joined the European Union.”

On a more solemn note, she added, “Eventually, the sea will sweep us all away. Until then, we choose to live in hope or despair. Or both. This play intricately explores these themes.”

The synopsis reads: “A wild storm shakes a small East Anglian seaside village, and Willy is unable to save his friend from drowning. The raving coast guard is too drunk to do anything, Hatch the draper is passing by but he believes that hovering alien spaceships are slowly replacing people’s brains and he refuses to help, while the grande dame, Mrs. Rafi, bastion of respectability, amateur theatricals and velvet curtains from Birmingham, sets her face against the chaos.” The play is set in 1907.

“There are big time echoes of [Shakespeare’s] The Tempest, for sure,” said Aberle. “Storm, shipwreck, collision of worlds and societies, innocence blossoming into love, monsters and a kind of shimmering magic. I would say there’s a strong parallel with the Book of Jonah as well: shipwreck again, and the struggle to find meaning in an often apparently unkind and unfair world. Ecclesiastes, too: ‘the race is not to the swift, nor the battle to the strong, neither yet bread to the wise, nor yet riches to men of understanding, nor yet favour to men of skill; but time and chance happens to them all.’”

Aberle plays the character of Evens, who he described as “the grizzled, weathered, often drunken ‘wise fool.’ A bit of the Prospero type, if we want to look at The Tempest connections, with aspects of both Jonah and the big fish, as well. He has withdrawn from society and lives (and drinks, ‘to stay sane’) in a little hut on the beach. It’s said of him in the village that he ‘knows the water round here,’ though, as he points out, ‘… luck and chance come into it. It doesn’t matter how clear the main currents are, you have to live through the details. It’s always the details that make the tragedy….’ The young hero, Willy, comes to him, looking for answers. Whether he finds what he seeks is a question whose outcome you’ll have to watch for.”

“Slamming Door Artist Collective presents classic contemporary works that aren’t otherwise being produced in Vancouver,” said McCarthy. “We provide not only opportunities for our audience to see these plays, but for established and emerging actors and designers to play with us on material they likely wouldn’t have the chance to otherwise.”

Aberle said he is “overjoyed to be introduced to this play and this playwright.”

“In my experience,” he said,

“Edward Bond is sadly unsung and underproduced – I’d never seen or read any of his work before and it’s delicious. My sense is that, when he came on the scene, he alienated the powers-that-be in British theatre. He’s from the working class and he writes about class alienation, struggle and societal transformation, with sometimes brutal clarity of vision. Apparently, there was nearly a riot when one of his early plays, Saved, was first performed – shouting from the audience and fisticuffs in the lobby.”

For tickets to The Sea, visit theatrewire.com.